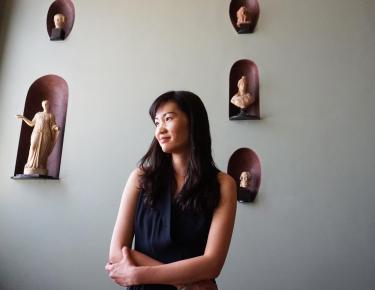 Stephanie Su is an East Asian art historian. Her research interests include the Sino-Japanese relationship, global modernism, historiography, history of collecting and exhibition, materiality of colors and print culture.

She received her Ph.D. from the University of Chicago. Before coming to CU Boulder, she was an Andrew W. Mellon Postdoctoral Fellow for Cultures of Conservation at the Bard Graduate Center in New York, and the Robert and Lisa Sainsbury Fellow at the Sainsbury Institute for the Study of Japanese Arts and Cultures at the University of East Anglia in UK. Besides researching, she has actively curated exhibitions, such as the special exhibition, Art Elements: Materials, Motive, and Meaning at the CU Art Museum​, Appropriation and Transformation: the Exploration of Painting by Chinese Artists Studied Abroad in the Early Twentieth Century at the He Xiangning Art Museum in Shenzhen, China (2015-16), for which she was the Assistant Curator.

Currently she is working on two projects. Her book manuscript, titled History Painting Crossing Borders: A Transnational History of Modern Art in Early Twentieth Century China and Japan, examines how ancient China was reimagined to be an idealized cultural entity that accommodated divergent discourse on civilizations, cultural identities and nationhood. Her book sheds new light on how regional identity and historical connections across East Asia led to the formation of modern nations and arts.

Her second project, Colors of Modernity: Changing Aesthetics in Meiji Japanese Prints, explores the impact of the global trade network on the late 19th century Japanese prints. This project combines interdisciplinary approaches to art history, technical art history and conservation science to trace the shifting color use, aesthetic discourses and the scientific development in modern Japan. Her research has been supported by the Japan Foundation, the Association for Asian Studies, the Japan Art History Forum, the National Museum of Korea Network Fellowship, among others.