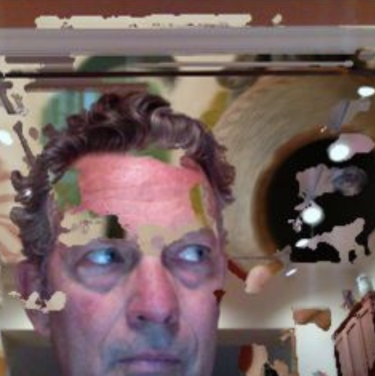 Chamberlin was born in southern California and raised in Sunset Beach, a small town on the coast south of Los Angeles. He earned a BA from San Francisco State University where he worked with Bud McKee, Peter Vandenburg and Stephen Desteabler. He earned his MFA from Alfred University in New York. He taught at the Camberwell School of Art in London in the late 70’s, early 80’s. Ian Auld was head of Ceramics at the time and Chamberlin worked with Glynnys Barton, Ewen Henderson, Gillian Lowndes, Gordon Baldwin, Jacqueline Poncelet, and Colin Pearson.

Chamberlin came to Boulder from the San Francisco Bay Area in 1985 to work with Betty Woodman (they met while he was in graduate school at Alfred University in 1976) and Tom Potter. He coordinated the ceramics program at CU for many years and is now sharing the duties with his colleagues, Kim Dickey and Jeanne Quinn. He spent 2009 on a Faculty Fellowship in New Zealand as a Visiting Professor/Artist in Residence in the Creative Industries Program at Unitec, in Auckland. He had two solo exhibitions in Auckland and juried the Portage Ceramic Awards, a yearly ceramic exhibition and award at the Lopdell House Gallery in Titirangi.

His ceramic work has been shown in Taiwan, New Zealand, Portugal, Sweden, England, and Holland as well as galleries and museums in the US. His work is included in many permanent collections in the US and abroad.

Chamberlin’s studio practice recently expanded to include work in Topiary (hedge and shrub sculpture) on the estate of Casa de Juste in the North of Portugal. He has been returning to Portugal every year since 2004 to continue the Topiary project. He designed a large garden with four specific sites for The Casa de Juste in 2006. The garden was planted in 2007. He is collaborating on various projects for the gardens at Casa de Juste with Chris Crowder, the Head Gardener of Levens Hall, one of the most important Topiary gardens in England.