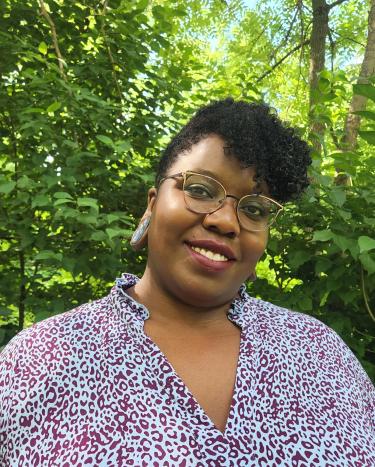 crystal am nelson is an assistant professor of art history whose research and teaching focuses on Black art and Black visual culture(s) as articulated through painting, photography, film/video, and performance. Her other interests include identity and representation, critical pleasure studies, and contemporary Black life. Her current project examines the visual culture of Black pleasure and the aesthetics of Black joy and safe space in the visual representations of quotidian Blackness as depicted by the painters labeled by Thelma Golden as the Black romantic. Professor nelson’s writing has appeared in Feminist Media Histories, Contact Sheet, Brooklyn Rail, caa.reviews, among other places. She has an essay in A Picture Gallery of the Soul, the catalogue (University of California Press, forthcoming fall 2022) for the exhibition which opens at the Katherine E. Nash Gallery at the University of Minnesota in September 2022. Alongside her research and teaching, Professor nelson has organized and co-organized several exhibitions including Heterotopia, Dark Desires, and Pictures and Progress: The Black Panther, 1966-2016 (with Drs. Cathy T. Thomas and Kiran Garcha).

Before coming to CU Boulder, Professor nelson was a Just Transformations Mellon Postdoctoral Fellow in African American Studies at the Pennsylvania State University. She received her PhD and MA in visual studies from UC Santa Cruz and her MFA in photography from San Francisco Art Institute.