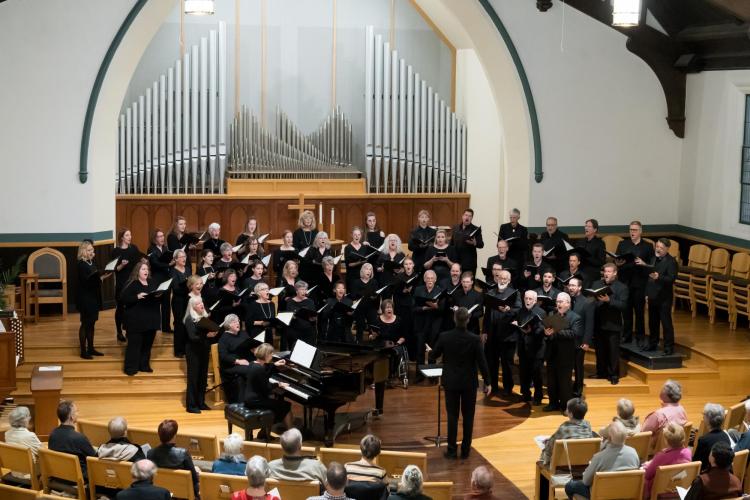 Upon learning about a colleague’s exploration of George Lynn’s music, I was intrigued to look into the collection of his compositions and writings in the Norlin Library archives myself. After perusing the long list of over 1600 compositions (only about 200 of which were published in his lifetime), I had picked out about 30 to consider more specifically. As the cart of the many boxes of compositions rolled toward my desk in the Special Collections Reading Room, I found myself considering how prolific this esteemed conductor, composer, and organist had been; his works ranged from solo art songs, to unaccompanied choral anthems, to works with full orchestration. After some hours of consideration, I was drawn to three pieces that, while composed in different decades, had a connection in the poetry Lynn chose to set. The three texts by Sara Teasdale, Ralph Waldo Emerson, and Walt Whitman each used the final hours of a day, or the dark moonlit hours of the night as metaphor.

I was privileged to meet and speak with George Lynn’s daughter, Dr. Tina Lynn-Craig, about her father’s life, music, and philosophies concerning music and teaching. Upon proposing my idea of editing these three pieces and setting them together, Dr. Lynn-Craig encouraged me to do so, explaining that her father appreciated well-thought connections between discrete pieces of music. I was honored to receive the George Lynn Memorial Award in the Spring of 2019 from the American Music Research Center for my proposal, and immediately began work on what is now titled, “Three Nocturnes.”

The first piece sets the poem “An Ended Day,” by Walt Whitman. George Lynn’s first version of this work was completed in July of 1965 for unaccompanied mixed choir, but in October of 1966, Lynn added a piano part. Also included in the collection is a separate part for an unnamed percussion part. Lynn’s music is triumphant and bombastic, matching Whitman’s equally resolute text that speaks of the sense of accomplishment and joy that one feels at the end of a well-lived day. Loud exultant proclamations of “Now triumph! Transformation! Jubilate!” are followed by suddenly quiet and contented repetitions of “An ended day,” as though the speaker is sighing with satisfaction at the end of a beautifully-led life. 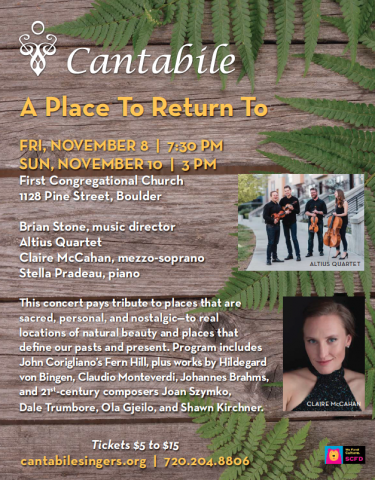 The second in the set is titled, “Look at the Stars.” Composed in 1987, Lynn inscribed a dedication to his friend, Gene Grey, who had directed him to the Ralph Waldo Emerson text set in the piece. The text is an excerpt from Emerson’s essay, “Nature,” which explores a world where the stars could only be seen once in a thousand year span. The awe inspired by their beauty could only be imagined until that one night when the world would darken enough for humanity to witness a starry night sky. Lynn’s music is lyrical with harmonies broadly voiced, complementing the unfathomable beauty of Emerson’s imagination. Lynn’s composition is not the only art inspired by Emerson’s essay. A short story by venerated science fiction author, Isaac Asimov, entitled “Nightfall” imagines a world with six suns, where darkness and night do not exist. In such a world, the stars could never be seen, bringing into focus the beauty that we might take for granted each night in the sky above us.

The final piece in the set titled “Moon’s Ending” also uses the night sky, this time more specifically the waning moon, as its subject. Lynn’s setting of Sara Teasdale’s poetry is a soundscape repeating the same words in each of three sections. In the first section, the choir sings together in quiet dissonant harmonies that slowly shift creating a hypnotic hymnody. In the second section, the sopranos continue with the melody they established, while the rest of the choir sings in long block chords that slow and blur the rhythmic pace of the harmony. The final section sets the soprano’s melody in canon with the tenors while the altos and basses slow to a simple drone, further blurring the texture. The overall effect is a fading of musical structure that matches the waning moon described in Teasdale’s poetry.

The set of three were performed in November of 2019 by Cantabile, a Boulder community choir that I have the pleasure of leading. Their performance brought the sensitivity of Lynn’s music to the fore. The process of bringing these three yet-to-be published works to light was deeply fulfilling, giving me the opportunity to transcribe, edit, and arrange the music of an important figure in American choral music. George Lynn’s music is a treasure trove with so many sonic gems yet to be examined. It is my hope that many others will find this opportunity to bring his music to light. I am very thankful to Dr. Tina Lynn-Craig and the American Music Research Center for their support of this collection and the continued exploration of George Lynn’s oeuvre.