Beyond Partition: Gender, Violence, and Representation in Postcolonial India 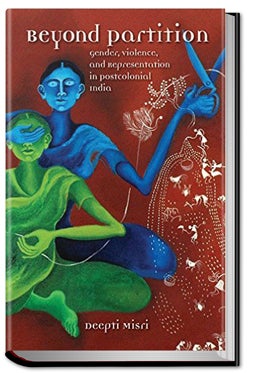 About the author: Deepti Misri is an Associate Professor of Women and Gender Studies at the University of Colorado Boulder. Misri received the Eugene M Kayden Book Award in 2016 for this book, which is awarded to the best book in Literary Studies (including English literature, non-English literatures and Comparative Literature) by a UCB faculty member.

Deepti Misri shows how Partition began a history of politicized animosity associated with the differing ideas of "India" held by communities and in regions on one hand, and by the political-military Indian state on the other. She moves beyond that formative national event, however, in order to examine other forms of gendered violence in the postcolonial life of the nation, including custodial rape, public stripping, deturbanning, and enforced disappearances. Assembling literary, historiographic, performative, and visual representations of gendered violence against women and men, Misri establishes that cultural expressions do not just follow violence but determine its very contours, and interrogates the gendered scripts underwriting the violence originating in the contested visions of what "India" means.

Ambitious and ranging across disciplines, Beyond Partition offers both an overview of and nuanced new perspectives on the ways caste, identity, and class complicate representations of violence, and how such representations shape our understandings of both violence and India.