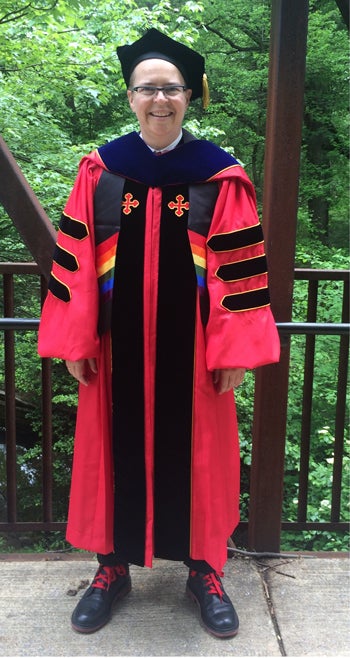 In May 2016, I completed the requirements for a PhD from the University of Maryland in the Physical Cultural Studies program of the Department of Kinesiology. I also completed graduate certificates in both Women’s Studies and Critical Theory. My dissertation was an analysis of the lineage of social activism in women’s professional tennis since 1968, the year tennis became “open.” My doctoral work, then, made my life come full circle. Having just closed the circle, I have been thinking of its beginning.

I arrived at CU as a mixed American Indian and white, raised in the working-class , lesbian, first-generation college student in 1994. To my advantage, I had been a professional tennis player for 4½ years prior to beginning my college journey. In fact, when I blew out my knee which ended my career, Rosie Casals, my coach at the time (and an inductee into the International Tennis Hall of Fame) told me to go to college until I figured out what I wanted to do for the rest of my life. College, since I now had a middle-class habitus from professional tennis, actually seemed like a viable option. Alison Jaggar, my undergraduate professor and mentor (and, for so long, my academic mom), is the reason that I majored in Women Studies (as it was called then) and Philosophy at the University of Colorado, as she holds a joint appointment in both departments. My thinking still shows the influence of Jaggar’s background in analytic philosophy where logic is key. I developed my theoretical understanding of, primarily, sex, gender, sexuality, and, to a lesser extent, race, most specifically in regards to African American social and political thought. Back then, my understanding lacked a proper intersectional analysis and these categories remained, for the most part, discrete. I became an activist for both the Lesbian Avengers in Denver and Oyate, the student group for American Indians at CU, though these activist selves were also separate. I also became an activist for helping lead the Women Studies students through the battle of becoming a distinct department, ensuring that we remained on the same page as the faculty. (My diploma is blank where the major should be written – since I graduated after approval of the department but before its official start date – which I enjoy as a constant reminder of this time of activism.) Attending the multiple meetings of the regents, Jaggar would tell us to look like we were graduates of British finishing school, a look that I feel will continue to be out of my grasp. At this time, though, I was still avoiding any discussion about a major component of myself: my professional tennis career.

Though I did not fully understand it at the time, Jaggar saw my political activism – which did have ill effects on my coursework and, thus, my work in her classes – as an equally important facet of my education as my learning in the classroom. Indeed, it was Jaggar’s phone number written in sharpie on my arm whenever I was involved in social activism with the Lesbian Avengers and other protests in Denver; she would be my one phone call if I were arrested, though she made it very clear that if I was arrested for having been violent in any way, I was on my own because…feminist ethics. Thus, Jaggar cultivated, yet kept in check, the importance for the relationality of theory and action in feminist work, an understanding that I still carry with me.

Jaggar often told me that I should consider becoming a professor which, honestly, I thought was crazy given my first-generation college status, my working-class and American Indian background, and that I still considered myself a “jock” who was possibly faking at being a scholar. However, the seed was planted and it just needed the right conditions to grow.

After graduating with my bachelor’s degree, I began a master’s degree in Religious Studies, focusing on American Indian religions and cultures under the guidance of Vine Deloria, Jr. To the still discrete but moving closer together categories that I had already been working on understanding, I added a racial analysis as it relates to American Indians and nationalism. I completed my master’s degree in 2001 with a thesis which analyzed the collision course that took place between Lakota and US nationalism through 1890, a topic very relevant now with the protests against building the Dakota Access Pipeline across Lakota lands. Of my thesis on the origins of Lakota nationalism and its ever-growing friction with US nationalism in the last half of the 1800s, Deloria said that my work provided underlying premises that his own work relied on but which had never been written. Being Choctaw, I was diligent to be extra sensitive to the fact that I was researching and writing about the Lakota, a group separate from my own. Through Deloria, I learned the importance and significance of my American Indian heritage and how to really value the insights into the world that it allowed me to have.

Sometimes life takes a different journey than one might expect. I did not begin my work towards a PhD until 2010. In 2002, my partner, Angela, joined the faculty at St. Mary’s College of Maryland. I worked behind the scenes while Angela pursued tenure, which she got in 2007 (and she is now a full professor!), and we adopted Ella, a newborn daughter, in 2004. Once Ella was in school full-time, I could start my own journey pursuing the PhD after having put it on hold for nine years. By 2010, I was ready to return to my past in order to study the sociology of sport, especially the culture of women’s professional tennis.

While a PhD student in Physical Cultural Studies, I developed a more nuanced understanding of how to study sport and eventually created an upper-level course for the department on “women, sport and culture.” Outside of the department, besides studying gender performativity in the Department of Theatre, Dance and Performance Studies – and accidentally becoming an expert on Judith Butler within the small field of the sociology of sport – I had the extremely good fortune to study intersectionality from Patricia Hill Collins who is housed in the Department of Sociology at Maryland. It was during Jaggar’s senior-level course on Feminist Theories in the spring of 1995 (over 20 years ago!), my second semester at CU, that I first read Collins’ book, Black Feminist Thought. This book changed all that I thought feminist theories had been and could be. Avoiding Collins during my first year or two quite simply due to fear, at the very firm urging of Jaggar, I finally enrolled in Collins’ course, Intersectionality. Intersectionality has been a strand of my work throughout my entire education even though its complexity makes it seem like I am constantly reaching for it but never able to hold it. Through Collins, I began to coalesce the previously discrete axes of identities with a more complex understanding of power, into a unified whole. My dissertation, “Charging the Net: Social Activism in Women’s Professional Tennis,” looked at the lineage of social activism within women’s professional tennis, viewing it as a 40+ year feminist social movement. It brought together many components of my past – tennis, activism, juggling multiple identities. Rosie Casals was my gatekeeper which allowed me access to players past and present. My dissertation also began with the social activism of the Original 9 beginning in 1968, of which Casals was a member, and it ends with the current activism of the Williams sisters. This sustained look at the genealogy and multiple cohorts of a feminist social movement adds to the literature of both social movements and feminist activism. The balancing of multiple axes of identities AND power while doing justice to intersectionality in order to write a book-length research study was difficult, but this is work worth doing. At least it is the work that I want to continue doing.

If Alison Jaggar planted the seed, Vine Deloria provided the sunlight, and Patricia Hill Collins kept the seed watered. A commonality among Jaggar, Deloria, and Collins is that their work, both in teaching and writing, is epistemically inclusive of various ways of knowing, along with an understanding of the power attached to whose knowledge is counted or not, foresight in knowing what political and cultural issues are on the horizon, seeing the interconnections between many different social groups and political and cultural concerns, and a sense of social justice in that the work is important and needed in people’s everyday lives, not just in academic circles. The work is not for accolades, though those have come anyway because their work is excellent, but for offering compassion, understanding, and possible solutions to people. The strength of these three for me is that they pushed me beyond intellectual levels that I did not think were possible. I am far greater as an intellectual for having been their student. The hard part for me now is becoming a scholar who is worthy of this lineage, and, if not becoming, at least continually trying to become.

Back to Bolder Voices
Next Article
Tags:
Return to the top of the page