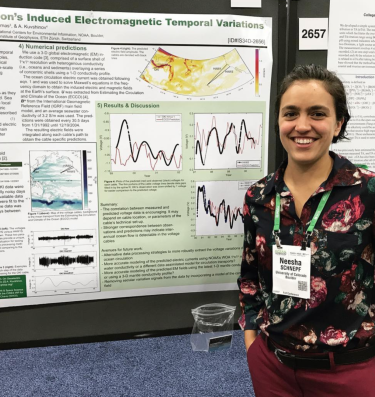 Geomagnitism Research and Advocacy for Feminism in STEM

Dr. Neesha Regmi Schnepf (she/they) is a biracial and bisexual androgynous woman, Neesha has a PhD in geophysics from CU Boulder and she works as a scientist within the CIRES / National Oceanic and Atmospheric Administration geomagnetism team. They serve on Out Boulder County's Queer and Trans People of Color Steering Committee. She also sings in the warm, nurturing community of Resonance Women’s Chorus.

The following transcript has been lightly edited for clarity.

A: Hi my name is Arpi

A: I’m speaking to Dr. Neesha Schnepf who is a CIRES post-doctoral researcher at the University of Colorado Boulder and the Geomagnetism team at NOAA.  So, tell us a little bit about your research interests.

N: I study planetary electro-magnetic fields. My PhD was looking at the electromagnetic fields made by different ocean processes and now, as a scientist, I’m working on separating signals from Earth’s core dynamo with that of other induced signals in near-Earth space. Studying Earth’s magnetic field is mostly important because of navigation. You know, for centuries people had used compasses to find their way around and, nowadays, we super rely on technology. We use magnetic field data everywhere for navigation. Whenever you pull out a cell phone and bring up Google maps, you’re actually using my research’s group’s World Magnetic Model to find out which way you are facing and from there, you use GPS to tell you how to drive. So, as we have self-driving cars and other more autonomous tech, we are going to depend more on magnetic fields for navigation.

A: Can you share any awesome facts about the Earth’s magnetic field?

A: I mean, it’s really useful too, to prevent these kinds of disasters and for saving lives.  Do you have any favorite planets other than Earth?

N: Aside from Earth, my favorite planet is really a moon and it’s a moon of Jupiter. It’s Europa – one of the Galilean moons. NASA’s Galileo mission in the 1990s actually discovered that Europa has a sub-surface ocean so it might have like alien fish! And this discovery was made using magnetic field data, which is just so cool to me.

A: And why did you pursue a PhD?

N: Well, when I was an undergrad and I was trying to think about what I wanted to do, and just sort of looking around me, it seemed like scientists had the best deal in life, ever! You know, like professors and research scientists both have total flexibility over their day and over what they were working on. It seemed like the job where you have most of your life within your control because you get to decide what projects you want to do, you can decide what times of day you want to work, and what times you want to be outside with your dogs, or sleeping, or whatever. And I just really wanted to do that! And, to be a scientist, you need a PhD, so it was a no-brainer for me to continue with graduate school.

A: Tell us a bit about your advocacy work that you’ve done in STEM.

N:  I’m within a field in physics, geophysics specifically, that is super male-dominated. Depending how you look at it, 80% to 85% of the field that I’m in is just men. And I’ve found, over the course of my education and just general life that feminism in general is super intertwined with LGBTQ issues. Places where women don’t feel safe are also going to be places where queer people also don’t feel safe, especially queer women. So, I’ve just done a lot of work to try to have more women in my field. So, the APS (American Physical Society) has this super great program called Undergraduate Conferences for Women in Physics. It’s something that every woman doing physics in undergrad should totally check out! I helped plan that conference at my undergraduate institution and then again here at CU Boulder more recently. And these conferences are a serious a huge morale boost because you are there, surrounded, by hundreds of women in physics. They’ll be talking about their research, and life. The second time I went, I was in graduate school and I was the only woman in my group. I remember that I was pretty depressed, and then when I got to the conference it was like being infused with happiness! It was so great! And then, towards the end of my PhD I started also planning women’s networking events at my more specific geophysics conferences. And those would work out really well, and they were really great. The way they worked was that we would just pick a bar or restaurant to tell all the women to meet at after the first day of the conference. Then, for the rest of the week, we would have that support and solidarity with each other. We could use it to help keep creepy men from hounding you at the poster session…so you feel more together through the whole thing—the whole conference. Beyond STEM, I’ve done different feminist and queer advocacy work. For the last year, I’ve been really involved with Out Boulder County and I serve on the Queer Trans People of Color Steering committee there.  I think that doing advocacy work outside of the STEM bubble is really nice because your life isn’t separated from the rest of the world, and it’s good to keep perspective and super good to have friends beyond STEM as well!

A: What good advice do you have for LGBTQ high school students who are interested in STEM?

N: So, the first advice I have applies to work and life in general, and is to be where you are respected and surround yourself with people who really care about you and really respect you. When you are in high school you don’t have a lot of control of that. I know. I mean, you don’t get to pick who your parents are and most of the time you don’t get to pick what high school you are at. But once you get to college, you have a lot of freedom in where you work, what you study, what internships you do—all those different things. So besides thinking about your goals, also think about where you’ll be able to accomplish things because you’ll be with people who have your back. Places where you can be yourself, and be respected and get work done. Personally, I started grad school at one institution where I didn’t feel respected and I didn’t feel safe. And it was a pretty prestigious school. It was the kind of school where a lot of might just say for the sake of the name, they just want to tough it out. But I felt that I was diminishing my goals by staying there so I left and came here to Boulder which is a much more feminist place where no matter how “dykey” I’m looking, no one ever gives me a hard time. I just always feel super respected and it’s great! [laughing]  And this also applies beyond work, too. Your support system outside of work and research is super important for you to be able to do what you are doing. So, if your family is not super thrilled with who you are, then make sure that you can grow you own really great chosen family who is. And the same goes for friends and partners. Don’t waste life energy with people that are just dragging you down! [laughing]

A: Well, awesome. Thanks a lot!

Transcribed by Dr. Robyn Sandekian
Return to the top of the page