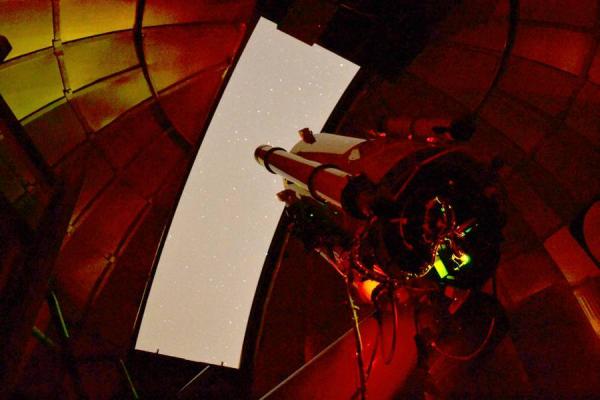 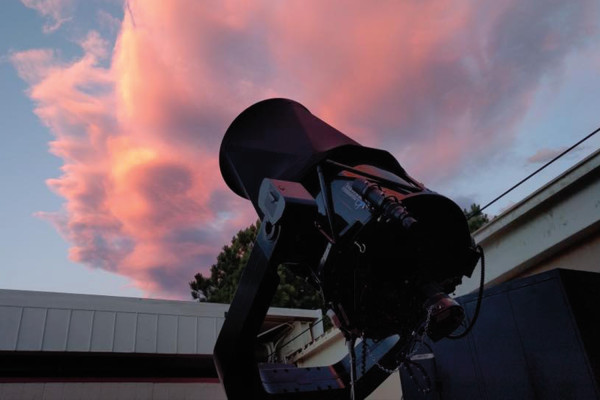 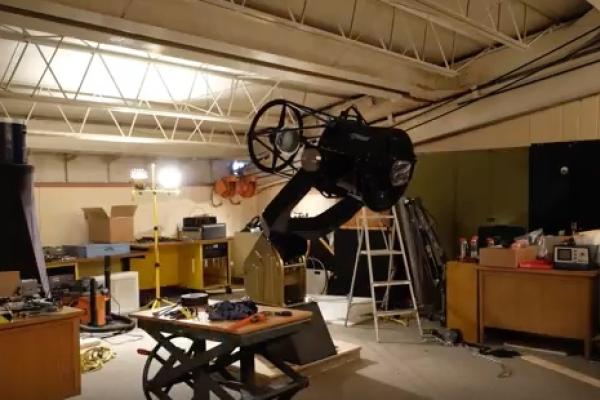 Watch the video of the 20-inch Telescopes Installation 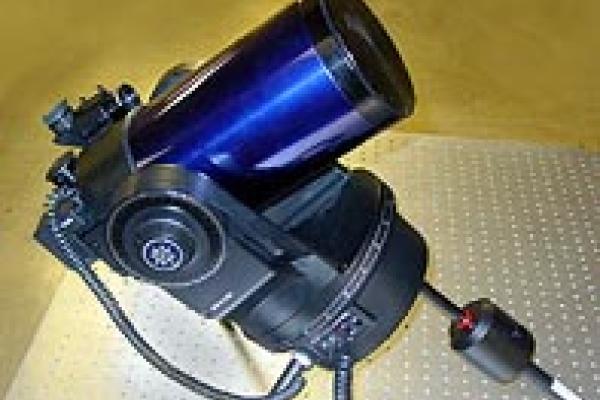 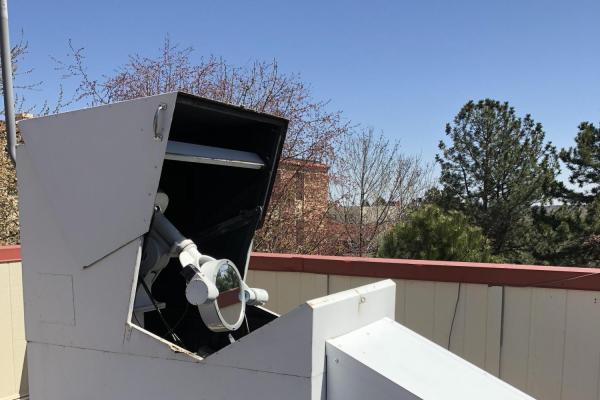 The heliostat produces an image of the Sun directly into the laboratory classroom at Sommers-Bausch. There, students can view a large-scale image of the Sun projected onto a wall, map the motions of sunspots to measure the rate of solar rotation, view the absorption lines in the solar spectrum, or watch flares and prominences develop in real-time using hydrogen-alpha and calcium-K filters.
When the Observatory's original telescope, the Bausch refractor, was replaced in 1973 with the 24-inch Cassegrain, its 10.5-inch f/15.5 primary lens was removed and used as the "heart" of a solar telescope that was assembled on the third floor of the Duane Physics Building. There the heliostat was maintained and operated by Dr. Don Billings, the department's only solar physicist. Eight years later, when the new addition to the Observatory was finished in 1981, the telescope was moved back to Sommers-Bausch and erected on the open observing deck.

The equatorial heliostat mount, built by Carson Astronomical, uses a 12-inch front-surface flat mirror to track the Sun and direct a parallel beam of sunlight down a tube aligned to the north celestial pole. The 10.5-inch Bausch lens resides inside the tube just before it passes through the deck floor and into the ceiling of the laboratory classroom directly below it.

In the classroom, the converging beam of sunlight reflects off of a "folding mirror" on an optical bench, and ultimately forms an intense, 1.5-inch (3.7 cm) diameter image of the Sun. Both the first and second optical flats are steer-able, so that the prime focus image of the Sun can be directed through additional apparatus to provide the various observing mode options.

In a technique familiar to amateur astronomers as “eyepiece projection”, the prime-focus image of the Sun is directed through a second lens, which in turn projects a new solar image onto a reflective screen on the far wall of the classroom. The result is a very large (30“ diameter) image of the entire solar disk. At this scale (nearly 2.5 arcseconds per millimeter), sunspots appear the size of nickels, dimes, and quarters, so that individual umbra and penumbral features are easily viewed. (For comparison, the Earth at this scale would appear to be about the size of a pea.) Sunspot details can be sketched by students simply by placing a piece of paper against the viewing screen, and drawing over the sunspot features.

A favorite use of this observational mode is to watch stunning sunsets as the Sun disappears behind Green Mountain to the west.

The projected image is also a great way to observe the occasional partial solar eclipse-the scale is sufficient for the viewer to see the ridges and valleys of the lunar craters in dramatic relief.

Astronomy students use this large-scale viewing mode to measure limb darkening and sketch the detailed structure of sunspots and sunspot gorups, also to monitor the changing apparent diameter of the Sun over the course of the semester.

By re-directing the beam with a third optical flat and a different projection lens, a small (6” diameter) image of the Sun can be produced on a wall-mounted clipboard. There, observers can directly trace the exact positions of sunspots relative to the entire solar disk.

This mode is used by astronomy students to measure the rotation rate of the Sun. Included in the observation are estimates of the Zurich sunspot number and the distribution of sunspots with latitude (via the famous “butterfly diagram”), which can be used in conjunction to estimate the curren phase of the 11-year solar sunspot cycle.

For many years, observers used the 3-meter Baird spectrograph-affectionately called “the coffin”-to inspect the solar spectrum. This mode is no longer used for visual observations, since a new spectrograph has been built, which allows many observers to view the spectrum at one time.

On the other hand, the Baird spectrograph still provides the ability to photograph large segments of the spectrum on 35mm film-both as balck and white negatives, and in color on strips of slide film.

An enclosed spectrograph, with separate slit, grating, and viewing screen, produces a 40-inch long visible solar spectrum from 4000-7000 Angstroms. At the dispersion of about 3 Angstroms per millimeter, literally hundreds of Fraunhofer solar absorption lines are visible to groups of students or visitors. And, by holding a sheet of bleached, white paper against the viewing screen, the normally invisible ultraviolet spectrum down to about 3500 Angstroms suddenly pops into view-thanks to the phenomenon of fluorescence.

Astronomy students use this spectrograph mode as an integral part of the Spectroscopy lab.

Normally, to see solar prominences, an ovserver has to travel to a location where a total solar eclipse is to occur. However, with a suitable set of narrowband filters, it's possible to see prominences-and solar flares, spicules, and many other features of the chromosphere-the upper “atmosphere” of the Sun-on any clear day.

Here at SBO we've developed a tri-color video system we've named SCRIBES that allows the user to simultaneously view a portion of the solar surface in three separate wavelengths-that of hydrogen-alpha, calcium-K, and also braodband green light. These three spectral regimes permit viewing of the upper chromosphere, lower chromospher, and photosphere, respectively. By recording images on a VCR in real-time, we can then observe how a feature evelves over a short period of time. 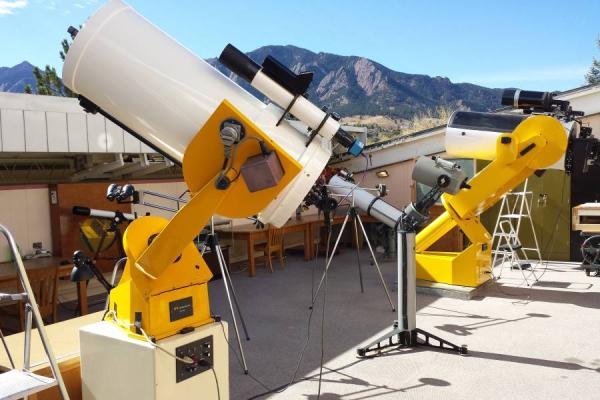 The 18-inch telescope was erected on the open Observing Deck of the newly-built Fleischmann Addition of SBO in 1982. The 16-inch, f/12 Cassegrain telescope was added to the SBO collection of pier-mounted telescopes in 1987. Read more... 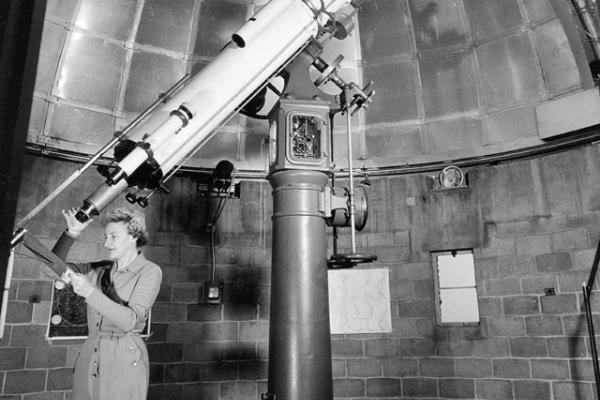 The original telescope to occupy the 25-foot diameter dome was the 10.5-inch Bausch refracting telescope installed in 1953. Read more...