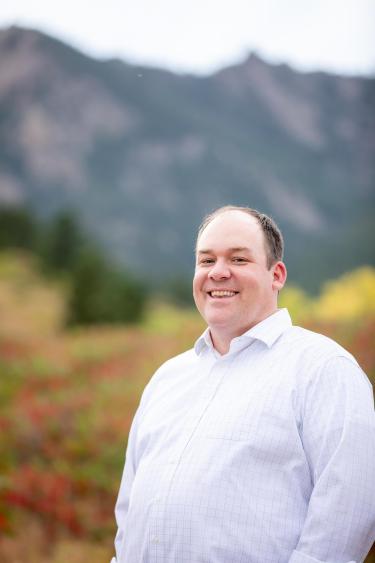 Prof. White was appointed as the inaugural Gallogly Professor of Engineering at the University of Colorado Boulder (CU Boulder) in July of 2018.

Tim completed a B.A. in Chemistry at Central College (Pella, IA) in 2002.  At Central, Tim was a four-year letter winner in golf and was recognized by the Golf Coaches Association of America as an All-American scholar in 2001 and 2002.  Tim's 8th place finish in the 2002 NCAA Division III championship secured All-American honors.

After graduation, Tim went on to the University of Iowa to extend his studies in the Department of Chemical and Biochemical Engineering with Prof. C. Allan Guymon.  At Iowa, Tim completed a PhD dissertation that elucidated the correlation between polymerization kinetics, morphology development, and electro-optic performance of polymer/liquid crystal composites.  After graduating in December of 2006, Tim moved to the Air Force Research Laboratory as a post-doctoral associate.  At AFRL, Tim initiated new research directions relating to photomechanical effects in polymeric materials as well as photoinduced reconfiguration of optical properties in liquid crystalline systems.  Tim joined the Federal workforce in 2009.  In his independent career at AFRL, Tim was heavily involved in leading basic and applied research activities, with extensive support from the Air Force Office of Scientific Research.  Tim also initiated and supported technology development and integration programs addressing Air Force warfighter needs.

Tim married his wife Jaymie in 2007.  They are proud parents of Avery (11), Micah (9), and Beckett (7).  Outside of work, Tim enjoys spending time with his family (usually at youth sporting events), following Iowa Hawkeye athletics, and playing golf.