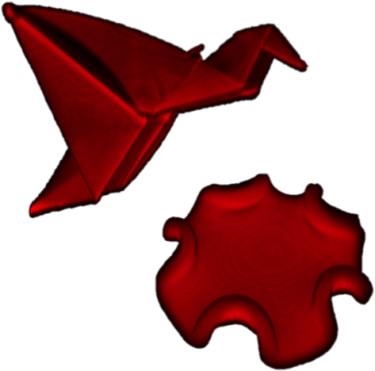 We work on a variety of topics inspired by the concept of materials that can change their properties on demand, clean or repair themselves, and actively interact with their surroundings. We are particularly interested in the mechanics of constrained and patterned soft polymeric materials that undergo shape instabilities in response to specific stimuli. For example, we have developed strategies by which temperature responsive gel sheets are micro-patterned to reversibly swell from flat sheets into precisely defined buckled shapes, such as the 5-node Enneper's surface and Randlett's bird shown at right. Other projects concern creasing, wrinkling, and folding instabilities of soft polymer multilayers, mechanics of supramolecular gels, and characterization of nanoscale structural heterogeneities in polymer networks.

Assembly of Polymer- and Particle-Based Nanostructures 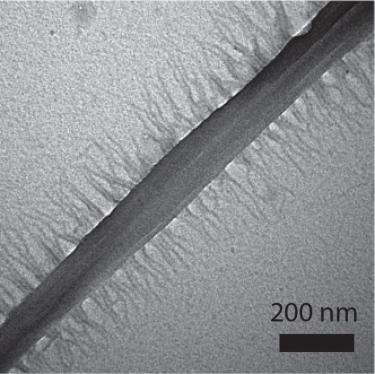 Our research also focuses on the development of new pathways to assemble materials into tailored nanostructures. In one example, we take advantage of solution-state crystallization of conjugated polymers into nanowires to control the architecture and photo-physical properties of these materials, such as the helical bundles of polythiophene diblock copolymers shown at right. We also study organization of nanoparticles in multiphase polymer matrices, and formation of well-defined hybrid polymer/nanoparticle assemblies through emulsion processing routes.