“I am an army brat. I actually spent most of my childhood living in Western Europe,” Professor Ferguson says. Between the ages of three and 13, she lived in West Germany and the Netherlands. “I was living outside the United States but reading news about it. We would get the Armed Forces’ newspaper, the Stars and Stripes, and my dad and I would argue over the kitchen table about the Iran Contra Affair, and whether Reagan was a good president or not. That was really fun.”

Ferguson attributes her interest in politics to her early education. She grew up around people with many different nationalities and learned to speak French in her time abroad. “It encouraged me to think about how societies could run completely differently than ours does in the US, and it gave me exposure to a lot of different ways of viewing the world and history.”

It wasn’t until her father left the military that she moved to Colorado with her family. “I hated it,” she says. “We moved to a suburban neighborhood where you had to be able to drive to get anywhere. When we lived in Holland, we lived in a small town and I could get on my bike as a kid and if my parents needed something for dinner, they could send one of us out. We didn’t need a driver's license or car.” 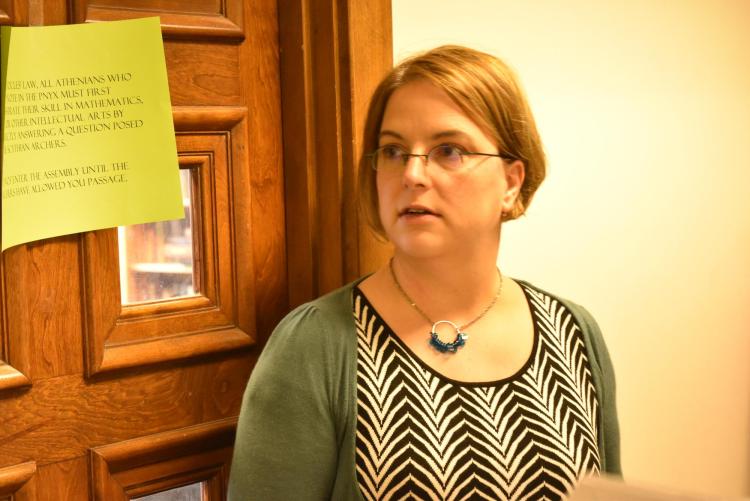 t to CU, but not wanting to follow them, Ferguson pursued Bryn Mawr for her undergraduate. She later went to graduate school at Harvard. After working at the University of Washington, Professor Ferguson received an offer to come to Boulder. A year after Ferguson started, her sister became a professor in Mechanical Engineering at CU. Their other sister works as a software developer and program manager at Google, so her whole family settled back in Colorado.

“We were all here in the 80s, we all moved away, and now we’re all back. I would not have predicted that this is how my life would be at this point.” 15 years later, Ferguson is still at the University of Colorado Boulder, inspiring her students to engage in greater conversations.

“How do you start to see yourself as a political agent?” The ultimate question Professor Michaele Ferguson asks her students. “I want students to be prepared for a life of engaged citizenship.” Ferguson creates opportunities for her students to hold civil debates, organize political action, and learn how to apply timeless ideologies to relevant issues today.

Students in Ferguson’s Sex, Power, and Politics class design and implement their own political activism projects. She keeps her students’ visuals as examples for future classes she’ll teach. Her show-and-tells include a #MeToo project students created: “They had a couple of cardboard boxes that they painted white and then wrote the hashtag MeToo on it. They had people in the UMC come and write their stories or just write MeToo on it if they weren’t comfortable sharing their experiences,” Ferguson says, as she points to the different stories people shared on the poster. “This is a very powerful way to raise people’s awareness of how pervasive sexual harassment and sexual assault are. But where does this take us beyond that?”

“I want [students] to learn that they as ordinary citizens can actually start to create change through things they can do here on campus.”

Professor Ferguson also teaches PSCI 2004 in political theory, but she adds a twist to it. She covers traditional ideologies including the big five: liberalism, conservatism, fascism, socialism, and anarchism. After spring break, however, Ferguson introduces feminism, white nationalism, anitfascism, Black Lives Matter and radical black thought into her course. “I can’t just teach the traditional ideologies, as if there aren’t other ideas popping up in our political world. I have to teach what is happening right now, too, to prepare my students to understand the world we live in.”

With passion and thoughtfulness, Professor Ferguson makes a difference in her students’ lives in her engaging and dynamic courses. Her outlook on teaching prepares students for more than just their careers; she is committed to creating spaces where students can think critically and apply their knowledge to political action.

“Politics means you have a vision of what the world should look like and you take a stand on something you want to change. If someone criticizes you, it doesn’t mean you have to be dug in about it, you just have to dig deeper.”