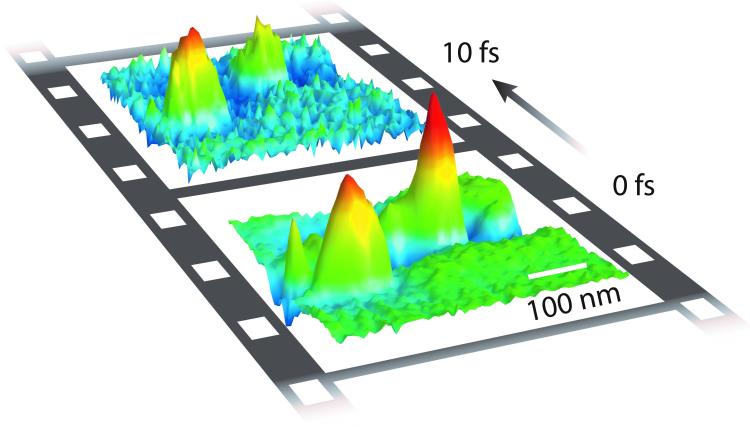 Congratulations to the Nano-Optics Group, led by Professor Markus Raschke, who has announced a record-breaking new optical microscope that can capture images at both the ultrafast and the nano-scale. The paper describing the discovery appeared in the February 8 edition of Nature Nanotechnology, and is available online.

The Nano-Optics Group created an ultrafast optical microscope enabled by a new technique that allowed for super-focusing light to deep-subwavelength dimensions using a tiny conical nano-tip. Then combining near-field microscopy with ultrafast coherent laser spectroscopy images of 10 nanometer spatial and <5 femtosecond (fs) time resolution could be obtained. A femtosecond is equal one quadrillionth, or one millionth of one billionth, of a second; a nanometer is one billionth of a meter.

The ultrafast microscope thus allows researchers to capture real-time, slow motion images of light interacting with electrons in materials, as they demonstrated in nano-structures of thin gold films.

"This is the first time anyone has been able to probe matter on its natural time and length scale," physics Professor Markus Raschke said. “We imaged and measured the motions of electrons in real space and time, and we were able to make it into a movie to help us better understand the fundamental physical processes in complex materials.”

Capturing these images will help researchers better understand the most basic physical principles of functional materials—including quantum materials, energy conversion materials, and basic biological processes such as photosynthesis—which are all based on the transfer of electrons and ions from molecule to molecule.

“Our study brings nanoscale microscopy to the next level, with the ability to capture detailed images evolving on extremely fast time scales,” says Vasily Kravtsov, a CU-Boulder graduate student in physics and first author of the paper.

The team used a special technique to focus extraordinarily short laser pulses into a only nanometer size focus spot based on a trick of decreasing the speed of light as its propagates along a conical tip towards its apex. This leads to a strong optical field confinement in the nano-focus and the efficient generation of nonlinear optical radiation. An image is then generated when the tip is scanned in very close proximity to the sample while simultaneously controlling the details of the exciting lasers pulses with extreme single optical cycle precision.

This new technique directly overcomes several previous limitations in optical microscopy not only in spatial and time resolution, but also in sensitivity and spectroscopic specificity with respect to the sample properties to be investigated.

“This work expands the reach of optical microscopes into completely new dimension,” Raschke said. “Using this technique, researchers can image the elementary processes in materials ranging from battery electrodes to solar cells, helping to improve their efficiency and lifetime.”

Unlike electron microscope approaches, the new technique does not require vacuum techniques and is applicable under a wide range of sample conditions making it particularly promising for studying ultrafast processes like charge and energy transport in soft matter, including biological materials.

The study was funded in part by the National Science Foundation and with support from the Pacific Northwest National Laboratory.