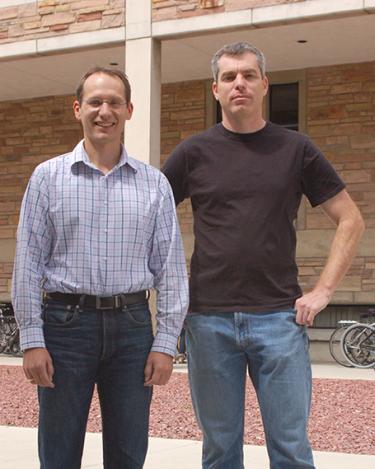 The Relativistic Heavy Ion Collider (RHIC) at the U.S. Department of Energy's Brookhaven National Laboratory has succeeded in creating distinct droplets of the quark-gluon plasma, the material that made up the Universe during the very first moments of the Big Bang. "These experiments are revealing the key elements required for creating quark-gluon plasma," said CU physics professor Jamie Nagle, co-spokesperson for the PHENIX experiment at RHIC.

In 2005, scientists at RHIC (pictured right) observed that gold-gold nuclear collisions created a quark-gluon plasma that acts like a "perfect fluid" which flows nearly without resistance. This experiment collides small nuclei, such as deuterium and helium, with gold nuclei, producing distinct droplets of the quark-gluon plasma in order to measure the properties of the perfect fluid. "RHIC is the only accelerator in the world where we can perform such a tightly controlled experiment, colliding particles made of one, two, and three components with the same larger nucleus, gold, all at the same energy," said Nagle. "This is the way to do good basic science—change just one thing at a time, the number of particles in the ion smashing into the gold nucleus, to test for these interesting geometrical effects." 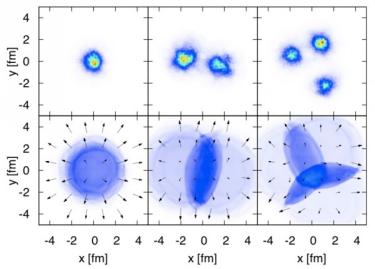 The analysis of the events (pictured right) reveals that the helium-gold collisions exhibit a triangular pattern of flow that is consistent with the creation of three tiny droplets of quark-gluon plasma.

Nagle and physics assistant professor Paul Romatschke (pictured left) proposed this experiment in 2014. Romatschke's theoretical calculation correctly described the behavior of the droplets in the experiment. "The fact that our predictions were confirmed by experiment seems to suggest that hydrodynamic theory is much more robust than was thought just a few years ago. This is very gratifying," said Romatschke.

"This is a pretty definitive measurement," Nagle said. "We are really engineering different shapes of the quark-gluon plasma to manipulate it and see how it behaves.”