OASIS Project Set To Launch on SpaceX This Afternoon

A new experiment by the Liquid Crystal Material Research Center in the Department of Physics is slated to go up to the International Space Station as part of NASA's SpaceX Commercial Resupply Launch this afternoon. The OASIS project will join several ongoing experiments on the space station when it launches today at 4:10 EDT/2:10 MT. The launch was originally scheduled to take place on Monday, April 13th, but called at T-Minus 2:39 due to weather. 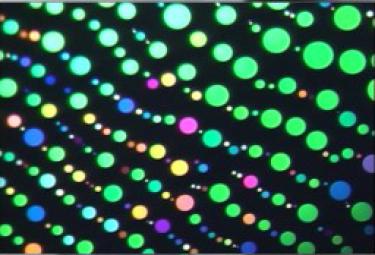 About the Project OASIS: Liquid Crystal Bubbles in Space

Be it your health, your cellphone or any one of thousands of other electronic devices, NASA's research on the International Space Station can make a difference. A current experiment looking into fluid dynamics and liquid crystals may lead to benefits both on Earth and in space.

The Observation and Analysis of Smectic Islands in Space (OASIS) experiment will study extremely thin film bubbles of liquid crystals in the weightless environment of the International Space Station. The liquid crystal bubbles can be as thin as 6 nanometers, just two molecules in thickness, stabilized by their (smectic) tendency to form molecular layers

OASIS researchers will observe the motion and merging of small hockey puck-shaped liquid crystal layers, known as smectic islands, that move around on the two-layer thick bubble film. The scientific objectives are to study how liquid flows in two dimensions, known as fluid dynamics, and to explore the interactions, self-assembly and coarsening, as well as the dynamics of colloidal dispersions of islands and droplets.

On Earth, as the islands coarsen, or form, into larger sizes or multiple layers, they slide to the bottom of the bubble in the same way as soap bubbles thicken at the bottom. In the microgravity environment of the space station, the islands can be studied without the effects of gravity.

OASIS will use the Microgravity Science Glovebox onboard the space station. The Glovebox enables a wide range of experiments in a fully sealed and controlled environment.

While OASIS is focused on basic physical phenomena, the findings may have a long-term impact on technology and human health, as is often the case with basic research.

"Since many of the processes critical for the life of the cell take place in the plasma membrane or in the membranes of organelles, the physics of transport, diffusion and aggregation of particles in thin, fluid membranes is of fundamental interest, with clear relevance to the life sciences," said Clark.

Liquid crystals and fluid dynamics are fundamental to many things that touch life here on Earth and in space. A better understanding of how they work provides a better opportunity to improve our lives and our technology.

The OASIS mission is the culmination of almost 20 years of ground-based research in the liquid crystal laboratories of the Department of Physics at the University of Colorado Boulder. Physics research faculty Joe Maclennan and Matthew Glaser are co-PIs on OASIS and senior scientist Cheol Park is the project manager. Since the inception of the smectic bubble project, no fewer than four graduate students (Darren Link, Apichart Pattaporkratana, Duong Nguyen and Zhiyuan Qi) and seven undergraduates enrolled in the Physics honors program (Markus Atkinson, Aaron Goldfain, Kate Wachs, Kyle Meienberg, Kyle Ferguson, and Kaitlin Parsons) have been involved in research related to OASIS. 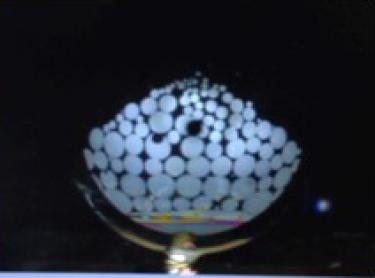 Recent years have also seen the inclusion of experimental collaborators from the Otto Guericke University in Germany, who will investigate the dynamics and self-organization of fluid droplets inkjetted onto the bubbles in microgravity, and theorists from the Russian Academy of Sciences in Moscow.

The OASIS experiment will be delivered to the ISS as part of the payload of the sixth SpaceX resupply mission, scheduled to be launched from Cape Canaveral today. The experiments will be carried out remotely over the course of three months, with occasional astronaut intervention, supervised by the mission scientists and controlled by engineers at NASA’s Glenn Research Center.

Within minutes the small islands/domains on this very thin bubble prepared in the laboratory form into larger domains and are pulled down by gravity. The bubble film is extremely thin and one cannot see the edges. (Credit: NASA)

Original images are available on request.