Home About Us History of International Education

The Office of International Education (OIE) was established on the CU Boulder campus in 1959 largely through the efforts of W. F. Dyde.  Dean (of Students) Dyde operated the Office on a part-time basis from 1959 to 1961. The mission of the Office at this time was to analyze the role of the University of Colorado in relation to the international scene and to advise faculty and students about international opportunities, to administer scholarships such as Fulbrights, to host visitors from abroad, to coordinate agreements between CU Boulder and international universities, and to process U.S. government forms, questionnaires, surveys related to international exchange.  The first official, bilateral student mobility program appears to have been an exchange between the University of Colorado and the University of Erlangen in Germany that was inaugurated in 1954, even before OIE was established, and lasted until 2004.

In 1960, CU President Quigg Newton convened a Conference on the Responsibilities of the University of Colorado in International Education to decide how CU would become a key figure in this growing area of higher education.  Among the faculty invited were W.F. Dyde and Harold Amoss, director & future director of OIE; Henry Ehrmann, chair of what became the Study Abroad Committee; and George Lessor, international student advisor.

In 1961, Professor Harold Amoss took over the administration of the Office of Interna­tional Education on a full-time basis. The mission and functions remained the same as those under Dyde except for the addition of the administration of CU education abroad programs. Upon recommendation by Dean Dyde, a committee of the faculty was appointed by Acting Dean John Little of the College of Arts and Sciences in October 1959 'to develop and recommend plans which may be presented to the faculty of the College... for their consideration this year..., to enable and encourage our students to study abroad...'  In 1961, the Faculty of the College of Arts & Sciences approved the ‘Junior Year Abroad’ Program and CU began offering its own study abroad programs. The first such program began in 1963 at the University of Bordeaux in France.

In 1968, the responsibility for international student advising was shifted from the Office of Special Services (OSS) to OIE and in 1969, Eugene Smith was hired as the first full-time Director of International Student and Scholar Services.  (Peace Corps liaison responsibilities had been reassigned from the OSS to the OIE the year before.)  Also in 1968, the first full-time Director of Study Abroad, Ruth Purkaple, was hired.

In 1971, the Boulder campus Faculty Council passed a resolution "clarifying the University’s goals in the fields of international education."  The resolution charged OIE with the following responsibilities that continue to be in effect today: 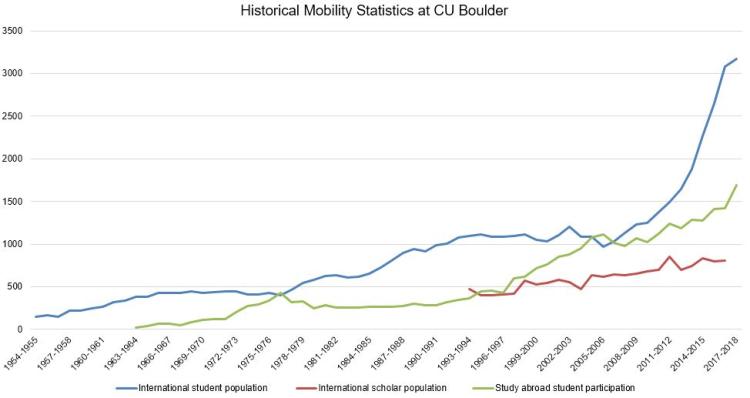