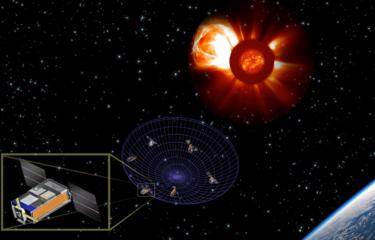 NASA has selected a new mission to study how the Sun generates and releases giant space weather storms – known as solar particle storms – into planetary space. Not only will such information improve understanding of how our solar system works, but it ultimately can help protect astronauts traveling to the Moon and Mars by providing better information on how the Sun’s radiation affects the space environment they must travel through.

The new mission, called the Sun Radio Interferometer Space Experiment (SunRISE), is an array of six CubeSats operating as one very large radio telescope. NASA has awarded $62.6 million to design, build and launch SunRISE by no earlier than July 1, 2023. Read more...

The Sun Radio Interferometer Space Experiment (SunRISE) is a proposed NASA Heliophysics Explorer Mission of Opportunity that finished Phase A last year. SunRISE will provide an entirely new view on particle acceleration and transport in the inner heliosphere by creating the first low radio frequency interferometer in space to localize heliospheric radio emissions. Six small spacecraft (S/C) will fly in a supersynchronous geosynchronous Earth orbit (GEO) within about 10 km of each other and image the Sun in a portion of the spectrum that is blocked by the ionosphere and cannot be observed from Earth. Mission-enabling advances in software-defined radios and GPS navigation and timing, developed and flown over the past few years on the Mars Cube One (MarCO) and DARPA High Frequency Research (DHFR) missions, have finally made this concept affordable and low-risk. By determining the location of decametrichectometric (DH) radio bursts from 0.1 MHz–25 MHz, SunRISE provides key information on particle acceleration mechanisms associated with coronal mass ejections (CMEs) and the magnetic field topology from active regions into interplanetary space. SunRISE is highly complementary to current missions, such as Parker Solar Probe and Solar Orbiter, and to the ground-based Daniel K. Inouye Solar Telescope (DKIST).

SunRISE shows that an Explorer Mission of Opportunity can answer fundamental questions in heliophysics, with implications for space weather prediction, and serve as a pathfinder for small satellite missions that have the potential to revolutionize space science. SunRISE will help us understand the particle acceleration that occurs throughout the cosmos and leads to solar flares, solar energetic particles (SEPs), anomalous cosmic rays, and Galactic cosmic rays (GCRs). SEPs and GCRs can damage satellites and lead to radiation sickness (Schwadron et al. 2014). Without new measurement methods (Cucinotta et al. 2010; Schwadron et al. 2015), heliophysics is missing a cornerstone for understanding particle acceleration. Parker Solar Probe (Fox et al. 2016; Kasper et al. 2015) will fly within 10 RS but will not measure particles as they are first accelerated (~3 RS). SunRISE offers the solution: localize radio emission from acceleration source regions and by energetic particles as they travel interplanetary space, laying the observational foundation for understanding particle acceleration and transport physics at the nearest star.

The SunRISE investigation uses well-studied classes of DH radio bursts: Type II associated with CMEs and Type III from electrons escaping from active regions into the solar wind along open magnetic field lines. SunRISE measures the 3D location of source emission and its evolution in time by determining the emission frequency and angular location of the burst on the sky. SunRISE discriminates between competing hypotheses for the source mechanism of CME-associated SEPs by measuring the location of Type II emission relative to expanding CMEs over distances from 2 RS–20 RS (Objective 1), where the most intense acceleration occurs. Every major SEP event seen at Earth is associated with a Type II DH radio burst. Imaging a Type II burst constrains which major features of a CME are associated with SEP acceleration. SunRISE also determines if a broad magnetic connection between active regions and interplanetary space accounts for the longitudinal extent of flare and CME SEPs by imaging Type III bursts as they traverse the corona (Objective 2). SunRISE traces magnetic field topology from the corona into interplanetary space for the first time.

The theory and implementation of aperture synthesis is well developed for ground-based telescopes. The SunRISE observatory has three mission-enabling features: Knowledge not Control: The S/C positions do not need to be controlled to better than 1 km as long as they are known to ~ 1 m accuracy. Integrated Solar DH Global Navigation Satellite System (GNSS) Receiver: A Solar DH signal chain measures radio emission at the location of the S/C while a GNSS signal chain records signals from GNSS satellites in view. The GNSS signals are used on board to synchronize DH data collection and in ground-based precision orbit determination to provide accurate S/C location and time. There is no requirement for communication between S/C, which operate independently. Correlator Architecture: The DH-GNSS receiver transforms the received DH signals to the spectral domain. On the ground, the individual S/C data are combined to form SunRISE’s synthetic aperture. This approach provides robustness against interference, reduces on-board computational complexity, and requires only modest downlink data volume. Implementation follows the proven approach of starting from well-defined, verifiable Level 1 science requirements that flow to Level 2 project requirements. A passive formation of six independent and identical S/C, SunRISE drifts in supersynchronous GEO orbit, high above the disruptive effects of the Earth’s ionosphere.

The SunRISE baseline science mission requires five S/C. An extra S/C provides redundancy. Their orbits are designed to keep the formation within a maximum separation of about 10 km, while providing the interferometer baselines needed to sample a range of angular scales. Nearly all hardware and software designs have been used before in space. SunRISE integrates them into a 6U form factor, using a standard small satellite design to accommodate the DH-GNSS receiver, GNSS antennas and deployable dipole antennas. A multi-channel polyphase filter bank processes the full spectrum from 0.1 MHz–25 MHz, allowing dynamic selection of a sufficient number of channels free from S/C generated or terrestrial interference to track radio emission over distances from 2 RS–20 RS. The P/L’s 4-channel GNSS receiver can process up to 42 GNSS signals simultaneously, providing sub-meter position knowledge (λ/15 at the highest DH frequency) and time knowledge better than a few nanoseconds. In post-processing conducted on the ground, these GNSS observables precisely determine the position and time when the DH data were recorded, which are used to cross-multiply the signals coherently, forming a synthetic aperture with the required localization capability.

SunRISE is operated by JPL during its 12-month mission lifetime, employing existing tools that have been used for dozens of missions. Operations consist of regular data collection and orbit maintenance sequences occurring on a 2-week cycle. The science observing profile, with an observing availability greater than 90%, is sufficient to capture the typical duration of Type II bursts. Science data are accumulated continuously, with only brief interruptions for telecommunications, orbital correction maneuvers and reaction wheel desaturation. During data downlink, small orbital corrections are uplinked, if needed, to maintain the formation without risk of collision. SunRISE data flow from the S/C to the Deep Space Network to the JPL Mission Operations Center (MOC) to the University of Michigan (UM) Science Operations Center (SOC), and finally to the Space Physics Data Facility.