The Cosmic Twilight Polarimeter (CTP) is the first ground-based proof-of-concept experiment being developed to measure the low-frequency foreground spectrum with polarimetry. The CTP consists of a pair of broadband (60-120 MHz) sleeved dipoles on a finite ground plane with the antenna pointing at the North Celestial Pole. 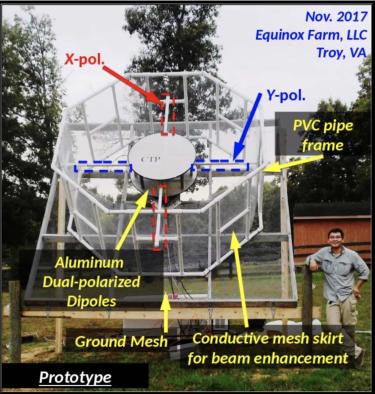 The CTP does not measure the intrinsic linear polarization from the synchrotron emission as does traditional polarimetric measurements in radio astronomy. Instead, the experiment focuses on the projection-induced polarization arising from anisotropy in the foreground source distribution.

The spatial variations in the foreground emission, contrasting to the relatively isotropic cosmological 21-cm background, induce a non-zero net composite linear polarization onto the broad antenna beam fixed on the ground.

The CTP is designed to measure this net composite polarization by sampling the Stokes parameters, which are used to parametrize different orientations of the polarization. As the foreground revolves continuously about the celestial pole, as observed by the sleeved dipoles, a unique sinusoidal signature (modulation) with angular frequency consistent to twice the sky’s revolution rate is imprinted on the polarization measurement as a function of time.

This dynamical signature in the Stokes measurement results in a second-order harmonic when the Stokes parameters are Fourier decomposed from the time space to frequency space. The magnitude at the second-order harmonic represents intensity of the measured projection-induced foreground polarization. By compiling the second harmonics, channel by channel across the frequency band, a duplicate of the foreground spectrum is constructed, which is free from the background 21-cm signal.