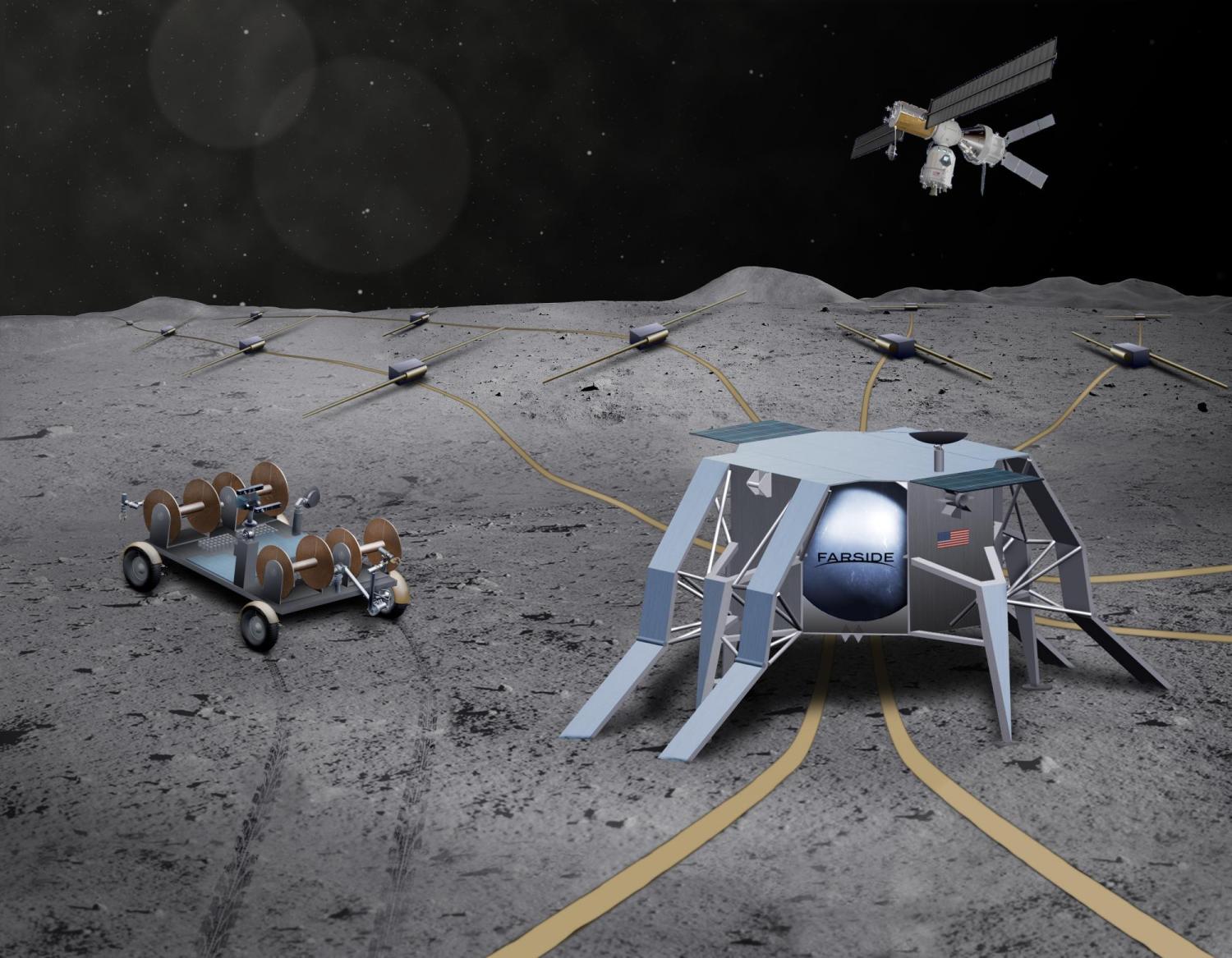 FARSIDE (Farside Array for Radio Science Investigations of the Dark ages and Exoplanets) is a Probe-class concept to place a low radio frequency interferometric array on the farside of the Moon. A NASA-funded design study, focused on the instrument, a deployment rover, the lander and base station, delivered an architecture broadly consistent with the requirements for a Probe mission. This notional architecture consists of 128 dual polarization antennas deployed across a 10 km area by a rover, and tethered to a base station for central processing, power and data transmission to the Lunar Gateway. FARSIDE would provide the capability to image the entire sky each minute in 1400 channels spanning frequencies from 100 kHz to 40 MHz, extending down two orders of magnitude below bands accessible to ground-based radio astronomy. The lunar farside can simultaneously provide isolation from terrestrial radio frequency interference, auroral kilometric radiation, and plasma noise from the solar wind. It is thus the only location within the inner solar system from which sky noise limited observations can be carried out at sub-MHz frequencies. This would enable near-continuous monitoring of the nearest stellar systems in the search for the radio signatures of coronal mass ejections and energetic particle events, and would also detect the magnetospheres for the nearest candidate habitable exoplanets. Simultaneously, FARSIDE would be used to characterize similar activity in our own solar system, from the Sun to the outer planets, including the hypothetical Planet Nine. Through precision calibration via an orbiting beacon, and exquisite foreground characterization, FARSIDE would also measure the Dark Ages global 21-cm signal at redshifts z∼50-100. The unique observational window offered by FARSIDE would enable an abundance of additional science ranging from sounding of the lunar subsurface to characterization of the interstellar medium in the solar system neighborhood. Read more...

Read more about the FARSIDE Final Report in the 2020 Decadal Survey Plan.

Artist’s impression of a planet orbiting an M dwarf experiencing a CME due to a megaflare event.

While these modeling results paint a potentially bleak picture, there is a very large degree of uncertainty in the space environments to which exoplanets are exposed. The biggest issue is the lack of empirical data on the rate, energy and impact of stellar CMEs. Other than the Sun, no main sequence star has ever been detected to produce a CME. Similarly, direct detection of exoplanet magnetic fields has yet to be achieved and remains the most crucial ingredient in assessing planetary habitability in the context of stellar activity.

Solar CMEs and SEP events can be accompanied by radio bursts at low frequencies, particularly so-called Type II bursts, as well as a subset of Type III bursts (complex Type III bursts). The emission is produced at the fundamental and first harmonic of the plasma frequency and thus provides a diagnostic of the density and velocity (few 100 to >1000 km/s) near the shock front, while the flux density of the burst depends sensitively on the properties of the shock and solar wind plasma (Cairns αet al. 2003).  Ground-based radio astronomy can only trace such events to a heliocentric distance of a few solar radii, whereas space-based radio antennas can trace the propagation of shocks out to the Earth and beyond, which is particularly relevant for characterizing geoeffective CMEs and SEP events. The detection of equivalent interplanetary Type II and III events is the goal of the FARSIDE array. 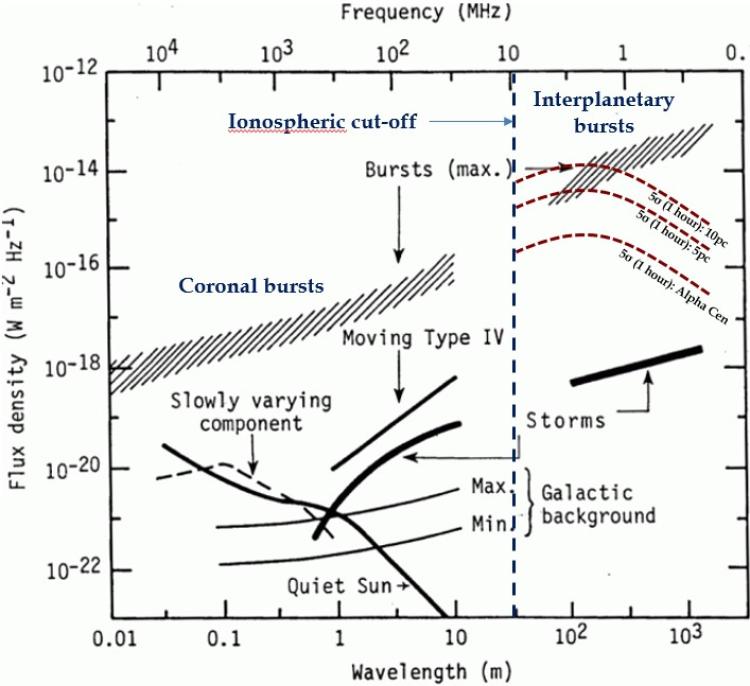 The flux density and frequency/wavelength of the brightest radio sources observed from Earth orbit. The brightest phenomena are solar radio bursts at all frequencies, particularly Type II and III bursts. Interplanetary bursts are the most luminous and are not detectable from the ground. FARSIDE can detect such events out to >10 pc.

Solar radio bursts can be extremely luminous, and are likely the most intense sources of extraterrestrial radio emission ever observed from Earth (Figure 2), reaching a flux density > 10-14 W m-2 Hz-1 (>1012 Jy). This corresponds to a flux density of >10 Jy at the distance of Alpha Centauri and 1 Jy at 5 pc. However, these bursts follow a power-law distribution in luminosity, and the brightest bursts are rare and peak at frequencies <10 MHz, which can account for the non-detection of such bursts from solar-type stars thus far. However, the non-detection of such events from active M dwarfs has been surprising (Crossley & Osten 2018; Villadsen & Hallinan 2019). M dwarfs flare to much higher energies and much more frequently than observed on the Sun (Figure 3). A correlation is observed between the flare energy and mass (or kinetic energy) of CMEs observed on the Sun (Aarnio et al. 2011; Osten & Wolk 2015) which, if applicable to M dwarfs, should produce very large CMEs, and associated luminous Type II bursts.

There are a number of explanations proposed why CMEs have not been detected on M dwarfs. The scaling law observed by Aarnio et al. 2011 simply may not extend up to the flare energies observed for M dwarfs. For example, it is possible that CMEs are confined or significantly suppressed by the presence of a significant large-scale poloidal component to the stellar magnetic field, which is often observed to be present on M dwarfs, but is absent on the Sun (Alvarado-Gomez et al. 2018). Although the largest events would still be able to escape to interplanetary distances, this would lessen the potential impact of CMEs/SEPs on the atmospheres of orbiting exoplanets. An alternative possibility is that CMEs are present, but are not detected, simply because the Alfvén speed is too high in the coronae of M dwarfs for a shock to form (Villadsen & Hallinan 2019; Mullan & Paudel 2019). The presence of a shock is an observed necessary condition for Type II emission (and a prerequisite for the generation of most SEP events). Shocks can potentially form at much greater distances from the star, where the Alfvén speed drops below the velocity of the CME, but the associated Type II burst would then be at frequencies below 10 MHz, and undetectable to ground-based radio telescopes.

FARSIDE will detect the equivalent of the brightest Type II and Type III bursts out to 10 pc at frequencies below 10 MHz. By imaging >10,000 degrees every 60 seconds, it will monitor a large sample of solar-type stars in that volume simultaneously, searching for large CMEs. For the Alpha Centauri system, including two solar-type stars and a late M dwarf, it will probe down to luminosities (equivalent to 10-15 W m-2 Hz-1 at 1 AU) for which equivalent solar radio bursts are detected frequently (Krupar & Szabo 2018). The nearby young active solar-type star, Epsilon Eridani (spectral type K2), is another priority target, for which bursts should be frequently detected. For the case of M dwarfs, FARSIDE will be able to detect Type II bursts formed at the distance where super-Alfvénic shocks should be possible for M dwarfs and directly investigate whether the relationship observed between solar flares and CMEs extends to M dwarfs. If it does, FARSIDE should also detect a very high rate of radio bursts from this population.

Left: The radio spectrum of Earth’s auroral kilometric radiation for 50%, 10% and 1% of the time. The flux density across the entire detectable band can vary by factors of a few hundred (Lamy et al. 2010). Right: The predicted flux densities (at frequencies <280 kHz) for a sample of known terrestrial exoplanets orbiting M dwarfs (Vidotto et al. 2019). The two horizontal lines highlight the sample of planets detectable by FARSIDE in a 1000-hour integration at 200 kHz (top) and in a one-hour integration where peak flux density is observed to increase by factors similar to observed for the Earth’s AKR (bottom). A large sample of planets, including some nearby candidate habitable planets (such as Proxima b), are detectable. 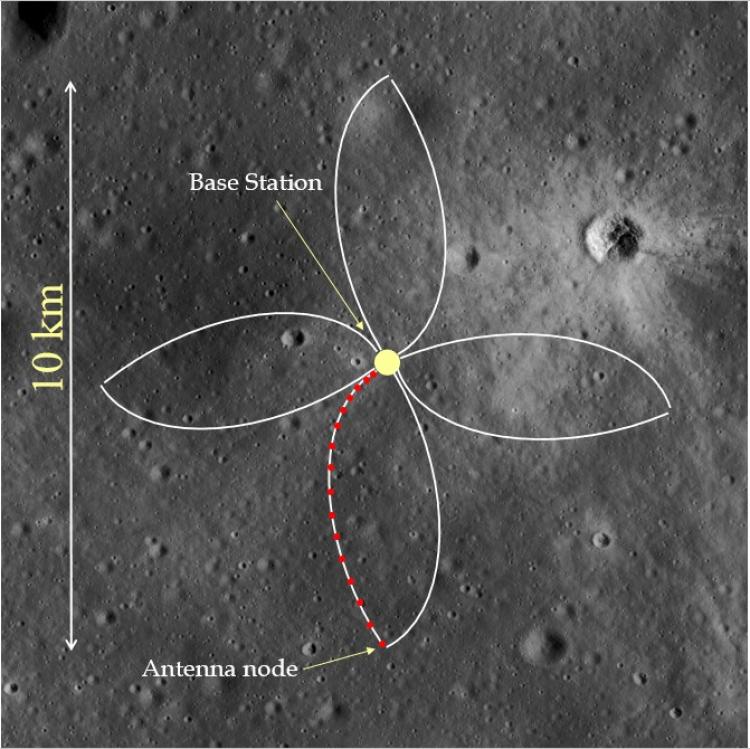 FARSIDE will consist of 128 antenna nodes deployed by a rover from a central base station, with the antennas arranged in a petal configuration.

FARSIDE consists of a central Base Station and 128 antenna nodes distributed across a 10 km diameter area (Figure 6). The nodes are distributed along 8 independent tethers, which are deployed to form 4 petals with a deliberate asymmetry to improve imaging performance. A deployment rover carries a set of antenna nodes out from the base station, unreeling the tether. Then the rover comes back to the base, along a different path, continuing to unreel the tether and attached nodes. This process repeats another 3 times until the array is fully deployed. The Base Station has a pair of Radioisotope Thermal Generators (RTG), providing power, signal processing, and telecommunications link back to Earth (via a relay). The individual antenna nodes are a crossed dipole with preamplifier, sending the two signals back to the Base Station via optical fibers as an analog signal.  The antenna nodes are powered in series similar to the scheme used for transoceanic cables, so only two power conductors are needed (although 6 conductors are used for redundancy).

Across this large an area, the presence of surface scatterers (boulders) could be an obstacle for deployment, as well as potentially creating discrete reflections for the eventual array. The largest boulders are expected to be on the order of 30 meters.  Extrapolating from Surveyor VII data shows that we might encounter 1 rock >100 meters in 23 km2, or about 2-4 boulders of this size in the 75 km2 area covered by the FARSIDE array. It is expected that the effect of these can be easily mitigated by array calibration. 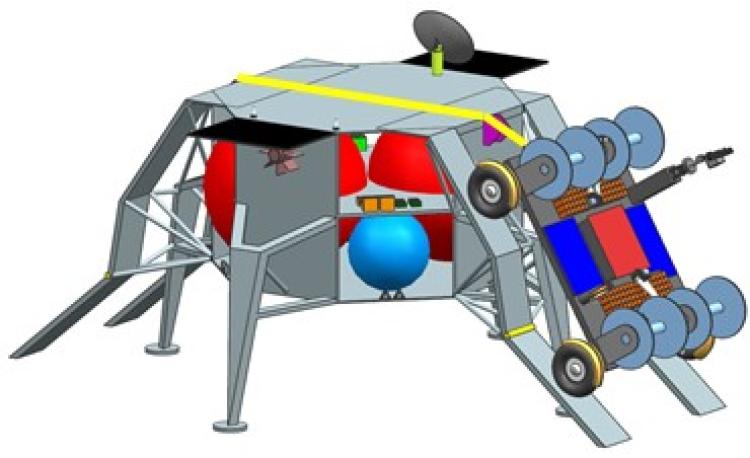 Conceptual design for the FARSIDE rover.

The 420 kg rover is based on the Apollo Lunar Roving Vehicle and includes 1.6 m2 of solar array and a 30 Ah battery to stay alive during the Lunar night. 4 RHUs keep the avionics warm at night, and during the day, a 1.3 m2 radiator is used to reject the heat during operations. The rover carries the same flight computer as the base station.  The telecom capability of the rover is essentially identical to the base station with a gimbaled High Gain Antenna (HGA) to communicate with the Deep Space Gateway. After landing, the rover is deployed down a ramp to the Lunar surface. A winch provides support during the initial steep descent. Ramps are provided on both sides for redundancy, in the event that the landing side makes it difficult to descend on one side or the other.
The rover includes 4 hazard avoidance cameras and 2 navigation cameras on a mast which are used by human operators on Earth. Every 5 meters (about 3-4 minutes at the expected driving speed) a set of images is collected and sent back to Earth, the teleoperators confirm the next 5 meter driving increment, and the process repeats, roughly every 7 minutes. An antenna node is deployed after every 3-4 hours of driving. Allowing 1 hour to deploy each antenna node, the trip out from the base to deploy 16 nodes will take 80 hours, and another 80 hours to return to base, deploying the second spoke. We have allowed one Lunar day (14 Earth days) to completely deploy one petal (two spokes) to allow for intervals when the Lunar Gateway is not in view, and for contingencies to route around obstacles.  During the Lunar night, the rover goes into deep sleep mode. After 4 months, all the petals will have been deployed.
Return to the top of the page