CU Boulder researchers have developed a new approach to designing more sustainable buildings with help from some of the tiniest contractors out there.

In a study published in the journal Matter and featured in the New York Times, engineer Wil Srubar and his colleagues describe their strategy for using bacteria to develop building materials that live and multiply - and might deliver a lower carbon footprint, to boot.

"We already use biological materials in our buildings, like wood, but those materials are no longer alive," said Srubar, an assistant professor in the Department of Civil, Environmental, and Architectural Engineering (CEAE). "We're asking: Why can't we keep them alive and have that biology do something beneficial, too?"

You can't buy these microorganisms turned bricks at your local Home Depot just yet. But the researchers say that their ability to keep their bacteria alive with a high success rate shows that living buildings might not be too far off in the future.

Such structures could, one day, heal their own cracks, suck up dangerous toxings from the air or even glow on command.

"Though this technology is at its beginning, looking forward, living building materials could be used to improve the efficiency and sustainability of building material production and could allow materials to sense and interact with their environment," said study lead author Chelsea Haveran, a former postdoctoral research assistant at CU Boulder, now at Montana State University.

Toay's more corpse-like building materials, in contrast, can be costly and polluting to produce. Srubar said: "Making the cement and concrete alone needed for roads, bridges, skyscrapers, and other structures generates nearly 6% of the world's annual carbon dioxide emissions".

In particular, he and his colleagues experimented with cyanobacteria belonging to the genus Synechococcus. Under the right conditions, these green microbes absorb carbon dioxide gas to help them grow and make calcium carbonate - the main ingredient in limestone and, it turns out, cement.

To begin the manufacturing process, the researchers inoculate colonies of cyanobacteria into a solution of sand and gelatin. With the right tweaks, the calcium carbonate churned out by the microbes mineralize the gelatin which binds together the sand - and, voila!, you get a brick.

"It's a lot like making rice crispy treats where you toughen the marshmallow by adding little bits of hard particles," Srubar said.

As an added bonus, such bricks would actuallyremove carbon dioxide from the air instead of pumping it back out. 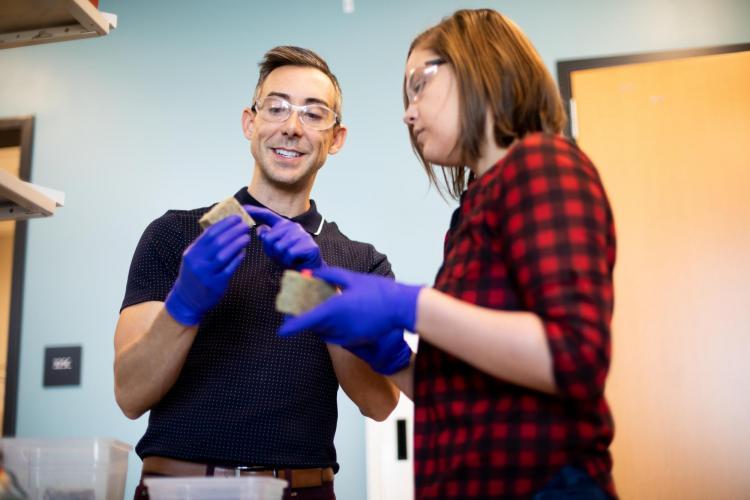 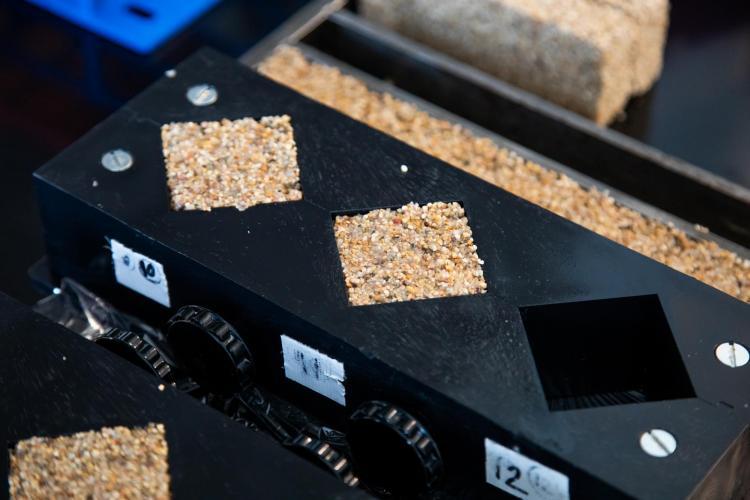 Top: Wil Srubar and CU Boulder graduate student Sarah Williams in the lab; bottom: A mold for shaping bricks made out of living materials. (Credits: CU Boulder College of Engineering and Applied Science)

They're durable, too. In the new study, the team discovered that under a range of humidity conditions, they have about the same strength as the mortar used by contractors today.

The researchers also discovered that they could make their materials reproduce. Chop one of these bricks in half, and each of the half is capable of growing into a new brick.

Those new bricks are also resilient: According to the group's calculations, roughly 9-14% of the bacterial colonies in their materials were still alive after 30 days and three different generations in brick form. Bacteria added to concrete to develop self-healing materials, in contrast, tend to have survival rates of less than 1%.

"We know that bacteria grow at an exponential rate," Srubar said. "That's different than how we, say, 3D-print a block or cast a brick. If we can grow our materials biologically, then we can manufacture at an exponential scale."

He notes that there's a lot of work to do before that can happen. The team's cyanobacteria, for example, need humid conditions to survive - something that's not possible in more arid regions of the world. So, he and his team are working to engineer microbes that are more resistant to drying out so they can remain alive and functional.

But, the possibilities are big. Srubar imagines a future in which suppliers could mail out sacks filled with the desiccated ingredients for making living building materials. Just add water, and people on site could begin to grow and shape their own microbial homes.

"Nature has figured out how to do a lot of things in clever and efficient ways," Srubar said. "We just need to pay more attention."