In Mary Shelley’s 1818 novel Frankenstein, Victor Frankenstein created a living being out of lifeless limbs, challenging the laws of nature and science in his dark laboratory.

In Wil Srubar’s lab at CU Boulder, they may end up doing the same — though in a much cleaner, brighter lab and with much less monstrous results. Their goal is to create a living hybrid building material that exhibits both structural and biological function.

Think of the sand and cement used in a mortar. It’s inorganic. Not living. But Srubar’s work has shown that inorganic particles, like sand, can provide a rigid framework for a biological component like bacteria to grow and thrive. Combine the two, and you end up with a living material that has not only a structural load-bearing function, but also a beneficial biological one.

“We use bacteria to help grow the bulk of the material needed for construction,” Srubar said. “We know bacteria grow at an exponential rate, so rather than manufacturing bricks one-by-one, you may be able to make one brick and have it split into two, then four, and so on. That would revolutionize not only what we think of a structural material, but also how we fabricate structural materials at an exponential scale.”

Srubar, a faculty member in civil, environmental and architectural engineering and the Materials Science & Engineering Program, said the possibilities for his work are endless and especially interesting in extreme environments and military applications. Bricks could self-heal after natural disasters or enemy fire, or act as alarms by changing color when there are toxins in the air.

Srubar and his colleagues are aware of the connections to Shelley’s work, going so far as to title their four-year, $1.9 million DARPA project Programmable Resurrection of Materials Engineered to Heal Exponentially Using Switches. That’s PROMETHEUS for short, a nod to the subtitle of Shelley’s work, “the Modern Prometheus,” and the Greek myth that inspired it.

In classical mythology, Prometheus created mankind out of clay, taught them how to survive and gave them fire stolen from the gods, earning him the gods’ punishment. Shelley references the myth with Frankenstein’s creation of the monster from dead parts and the eventual loss of control over it despite his best intentions to better civilization.

Srubar notes this aspect of the myth wryly.

“What was intriguing to us as a team was that we were also trying to create a Frankenstein material while learning from our predecessors and avoiding the same fate by not losing control of our technology,” Srubar said. “We often speak of this project as ‘The Post-Modern Prometheus,’ where we have finally, after three tries, wielded the technology we have created.”

At the center of the project are cyanobacteria, photosynthetic saltwater bacteria that can sequester carbon dioxide. Placing genetically altered versions of these bacteria into the building material would provide an environmental benefit, especially in terms of lowered carbon emissions from manufacturing materials.

“Cyanobacteria are actually green, so it really does look like a Frankenstein material,” Srubar said, laughing.

Srubar is conducting the work with Assistant Professors Mija Hubler and Sherri Cook in the Department of Civil, Environmental and Architectural Engineering, and Professor Jeff Cameron in the Department of Biochemistry. They bring experience in the biological sciences, gene editing and structural mechanics — needed perspectives on an interdisciplinary project this large, Srubar said.

“They opened my eyes not only to different ways of looking at science and engineering, but also to ways in which we can address some of the challenges we encounter and then spin those challenges into opportunities,” he said. “Sharing some of the common challenges in materials science has bolstered our work in micro- and synthetic biology, for example. That is leading us in wildly cool and crazy directions in the project.”

Srubar feels as though his lab is truly pioneering a new field despite being deeply rooted in fundamental disciplines.

“For the first time we are questioning the paradigm of cementitious materials, and that is incredible because cement technology hasn’t changed in 100 years,” Srubar said. “While we are still some years away from seeing a true application, we do feel that we are creating this new discipline.”

Cyanobacteria are actually green, so it really does look like a Frankenstein material. 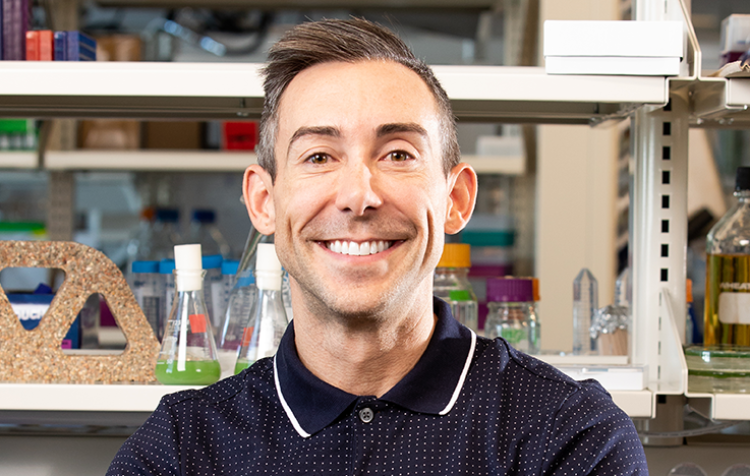 In addition to his research and teaching activities, Srubar also has served as the faculty advisor for the CU Boulder Out in STEM chapter. oSTEM is a professional society focused on supporting LGBTQ people in the STEM community.

Zach Lamb, president of the chapter, recalls moderating a panel at Google in Boulder with Srubar and several other LGBTQ engineering faculty members. During the Q&A, they discussed recent national and local events that “evoked fear amongst anyone identifying as queer.”

“It was inspiring to see them speak to these events with hope,” Lamb said. “They admitted to having some fear, but that’s what made them such great queer role models. They felt human and relatable – people who my group and I felt like we could grow up to realistically be someday.”

On the Grid
END_OF_DOCUMENT_TOKEN_TO_BE_REPLACED
Return to the top of the page