Every advancement in the field of soft robotics brings researchers one step closer to developing wearable, surgical and collaborative robots that could safely and effectively help humans. This is why researchers in the Department of Mechanical Engineering at the University of Colorado Boulder have released a toolkit to show scientists, hobbyists and entrepreneurs how to create their own artificial muscles. 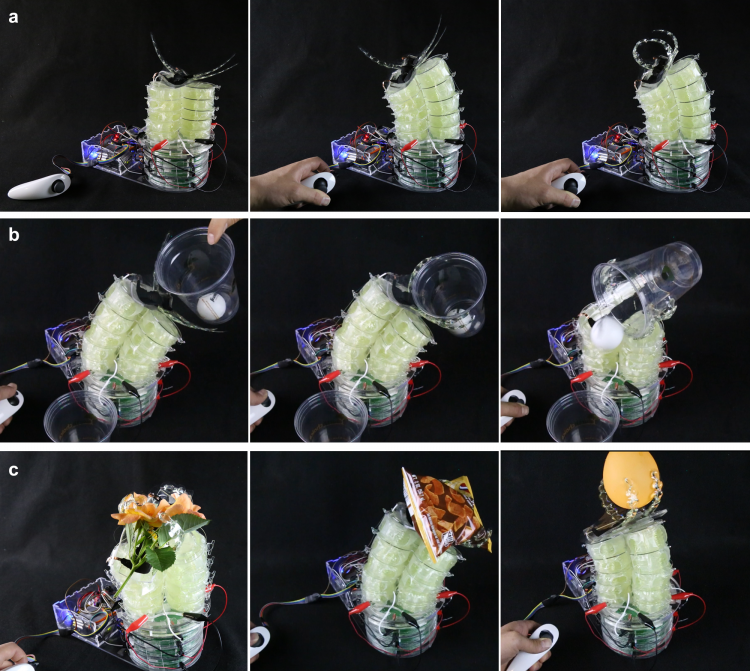 This soft robotic device was inspired by an elephant trunk. It can grasp and manipulate delicate objects including a flower, a bag of chips, and a balloon. The device can also move a ping pong ball from one cup to another.

The field of soft robotics aims to replace motors, gears and metal with components inspired by biological organisms and systems in the natural world. Soft materials integrated with sensory perception and motion allow these robots to navigate environments with high levels of adaptability and dexterity. In Keplinger’s lab, soft robotic devices have performed tasks such as throwing a ball or gently grasping a raspberry.

In January 2018, Keplinger’s lab pioneered the HASEL (Hydraulically Amplified Self-healing ELectrostatic) actuator, a new type of artificial muscle demonstrating impressive speed, strength and efficiency. Since then, the group has developed a portable electronics package that allows the robots to operate without being tethered.

Now, the lab is taking that technology to the masses.

In a toolkit published June 11 in Advanced Science, the team provides a framework that enables a broad audience to prototype, manufacture, test and power HASEL actuators. For a few hundred dollars, using off-the-shelf materials like canola oil, thin plastic films and tools like an inexpensive 3D printer, anyone with a dedicated interest can give it a try.

“It is remarkable that the artificial muscles created with the introduced techniques demonstrate performance that drastically exceeds previously reported HASEL actuators,” said Keplinger. “I am particularly excited about this paper as it introduces a comprehensive set of methods and tools that make the HASEL technology accessible to a wide range of researchers and hobbyists.”

The toolkit allows users to create several bio-inspired soft robots, including an artificial scorpion tail that mimics the high-speed strike of a scorpion, twisting actuators that resemble tendrils of various plant species, or an artificial elephant trunk that can be used for grasping and manipulating delicate objects.

Though some soft robots are starting to find commercial use in industrial automation, there is a substantial need for the technology in areas directly impacting human life, Keplinger said. This is why several members of the Keplinger Research Group founded Artimus Robotics, a company spun out of CU that is commercializing the HASEL technology. The group is currently participating in Catalyze CU, the summerlong entrepreneurial accelerator program.

“HASEL is only useful for others if they can easily adopt, explore and push the boundaries of this new technology,” Mitchell said. “We’re excited about moving soft robotics out of the lab and into the real world.”