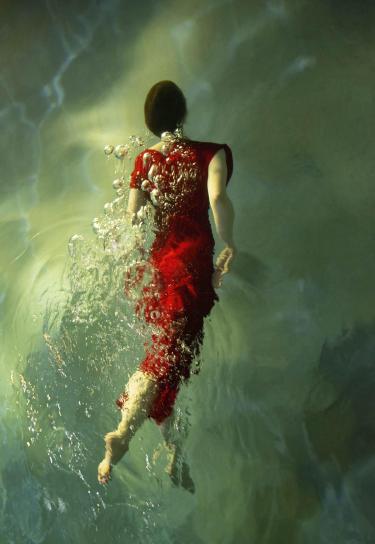 The male gaze commonly describes a way of looking at and being seen in the world that empowers men and sexualizes women. It comes out of feminist studies and film studies and is often applied to the visual arts.

Although usually applied to women, the process of objectification and sexualization also impacts men. For example, Game of Thrones actor Kit Harington recently complained about being labeled "a hunk."

Photographers like Jerrie Hurd who specialize in figurative images often struggle to find form and beauty in the human figure while avoiding objectification.

Jerrie Hurd took up photography later in life after working as a novelist and teaching writing at several colleges. Her photographic work is almost exclusively figurative, and she often depicts figures in water and outdoor environments. She is interested in how water creates an ethereal quality and presents artistic challenges as models quickly change poses.

Hurd’s work is influenced by the photographs and writing of Anne Brigman (1869–1950), an early proponent of women's rights known for her photographs of nude women. Hurd says, “Some modern feminists object to pictures of nude women because they appeal to the male gaze. Anne Brigman argues that it does not help to cover up and that hats, long skirts, and veils are also about the male gaze. I like to think that my photographs continue in that tradition. I often include masks, veils, and long skirts in my work as a way of asking viewers to look—really look—at what is happening between the body and coverings. This extends to the male body, which has its own rigid societal expectations.”

After growing up in rural Idaho, Hurd received her BA from the University of Colorado Boulder and MFA from the University of Oregon. She lived on both the east and west coasts of the United States before returning to Boulder. Her photographic work has been featured in juried exhibitions from Florida to California over the last fifteen years. Hurd has served on the board of several arts and writing organizations, including The Western Writers of America and the Autry Museum. She was one of the founders of Women Writing the West. She has received numerous awards for her writing and photography. To learn more about Jerrie’s creative practices, please visit her website, www.camerapoems.com.

Joan Markowitz was born in New York and has resided in Boulder since 1976. Her never- ending interest in the arts has shaped her personal and professional experiences.  She received her BA from Hunter College and her MA from the University of Colorado Boulder. Markowitz was a gallery owner for ten years and then curator of the virtual Women of the West Museum. She has served on the steering committees for the Dairy Arts Center and Boulder’s Open Studios. From 2005–-2010, Markowitz was co-executive director and senior curator of Boulder Museum of Contemporary Art (BMoCA). In 2016, she was on the curatorial committee for A History of the Visual Arts in Boulder (HOVAB), a community-wide cultural event. As part of HOVAB, Markowitz curated two BMoCA exhibitions: Evolving Visions of Land and Landscape and HOVAB at Macky: Shark’s Ink.

BMoCA @ Macky is a collaboration between BMoCA and The Andrew J. Macky Gallery, located in the foyer of the Macky Auditorium Concert Hall at the University of Colorado Boulder.