We’ve all been there, when autocorrect changes what we were trying to say entirely. But how do you fix it?

Our paper, which we wrote for Prof. Kira Hall’s “Language and Digital Media” class, looked into the different ways people correct themselves in text messages. Language is a collaborative medium, and therefore mutual comprehensibility is vital for a successful conversation. This means that, during a conversation, we must occasionally fix a word or a sound that comes out wrong; this is known by conversation analysts as “self-repair.” Additionally, self-repair is defined as happening before the end of one’s conversational turn (i.e., before another speaker responds). The reason we engage in self-repair is to ensure that everyone in a conversation receives all the information that we intended to convey.

In our paper, we argued that text message corrections are a written equivalent to self-repair in speech, and thus serve several functions, including mutual comprehensibility. When utilizing self-repair in both written and spoken language, people adapt corrections to fit the social context and perceived severity of the miscommunication. From analyzing our data, we found five types of repair following written mistakes. Our paper focuses on three of these: standard correction, no correction, and other-initiated correction. We argued that people participate in text message self-repair through the use of asterisks in a way that approximates principles of face-to-face self-repair. This is exemplified by the exchange below, which we analyzed in our essay. 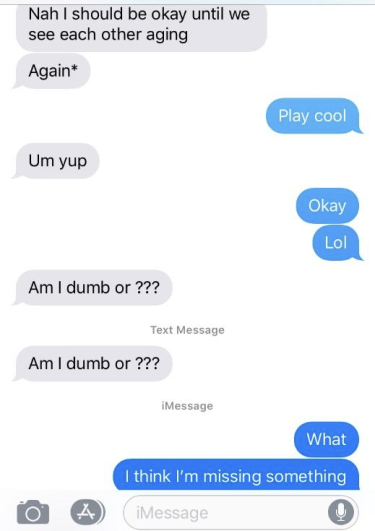 This exchange highlights the role played by self-repair in establishing mutual comprehensibility. It demonstrates two different types of text message self-repair, one with an asterisk and one without, and the reactions they cause. The first correction, initiated by Speaker 1 (left text), is a model example of a standard correction because the mistyped “aging” was corrected to “Again” in the succeeding text with an asterisk. The second correction, which is also a standard correction, occurs after Speaker 2 (right text) types “Play cool” instead of “Okay cool” and subsequently corrects herself without an asterisk (“Okay”). However, this instance of self-repair is not understood, causing confusion for both parties. Speaker 2 misjudged the incomprehensibility of her typo and didn’t realize that the omission of an asterisk would lead to her correction being interpreted as an independent turn. That is, Speaker 1 interpreted “Okay” as a reply to “Um yup” instead of as a self-repair, leading to conversational breakdown (“Am I dumb or ???”). Earlier, Speaker 1’s mistake was corrected within the conversational turn, which made the correction clear.

The concept of turn-taking helps explain why the second correction in the above example caused such a rift in intersubjectivity. The utterance was perceived as completed by Speaker 1 but not by Speaker 2, and thus the correction was not interpreted as self-repair by Speaker 1. Luckily, because language is collaborative, the two participants were able to work together to figure out what went wrong in their discussion, and mutual comprehension was restored.

After analyzing a large amount of data like this one, we concluded that text-message self-repair is a dynamic, developed aspect of text-based communication that generally approximates principles of face-to-face self-repair. By using asterisks, adding commentary to a mistake, or forgoing correction altogether even when a mistake is present, people adapt their self-repair to fit the social context and perceived severity of the miscommunication in order to ensure mutual comprehensibility.

The use of the symbol * for repair purposes is unique to online discourse, and its origin is extraordinarily difficult to trace. This new morpheme, however, provides further evidence that language is ever evolving. With the rise of the internet came a new medium that supports creative adaptations of already-existing language features. In this case, we see the creative digital adaptation of an important aspect of spoken communication, self-repair. This uniquely human tendency to use language in creative ways, seen even in the way texters correct their text messages, is a primary driver of language evolution. 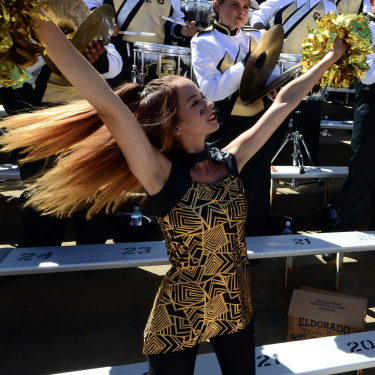 Annabel is a fourth-year student majoring in Psychology, Linguistics, and Speech, Language and Hearing Sciences. She is a member of the color guard in CU’s Golden Buffalo Marching Band and hopes to either become a Speech-Language Pathologist or go into psycholinguistic research. 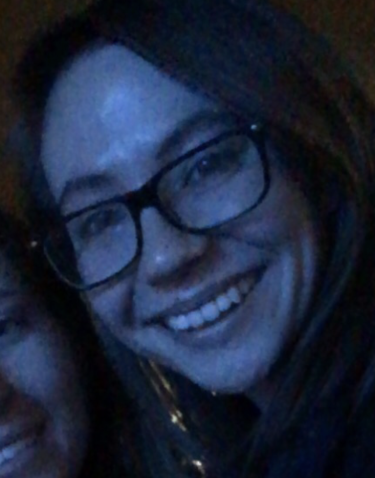 Caitlin is a fifth-year student majoring in Linguistics, German, and Sociology. She is an avid fan of music, horror, and animals and hopes to travel post-graduation.