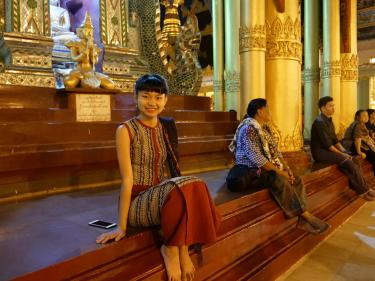 We are ecstatic to announce that one of our graduate students, Chu Paing, has been awarded the prestigious 2019 National Science Foundation (NSF) Graduate Research Fellowship! This is an incredibly powerful award, amounting to almost $50,000 per year in stipend and tuition funding for the duration of 3 years. This is a tribute to Chu's hard work, persistence, and intellectual acumen across the fields of linguistics and anthropology.

The title of Chu's project is: "The Burman, the Rakhine, and the Rohingya: Ethnic Categorization through the Processes of Linguistic Differentiation in the Case of Myanmar"

This project will look at the opposition between official and unofficial ethnic groups in Myanmar as a means of assessing the critical role taken by language in fueling ethnic conflict. As a linguistic anthropologist, Chu is interested in the discursive production of difference between the Rohingya and the Rakhine, particularly as the Rakhine, who are predominantly Buddhist, cohabit Myanmar's northwestern state with the Rohingya and share sociohistorical, linguistic, and phenotypic ties with communities in the neighboring nation of Bangladesh. She hypothesizes that the violence against the unrecognized Rohingya population is enabled by a system of ethnic categorization that creates a linguistic alliance between officially recognized ethnic minorities such as the Rakhine and the Burman majority.

Heartfelt congratulations to Chu (pictured at right) for this well-deserved fellowship, and we look forward to hearing more about the project as it develops!