What sparked my interest in the topic of catcalling had to be growing up in Santiago, Chile, where I constantly heard my mother being called names when we walked around the street. For example, she’d be called mijita rica, which translates to something like ‘delicious woman.’ I was little, and it always made me curious why people would approach her with these flirty comments when we would just be minding our own business. Now that I took a class that allowed me to focus on this topic, Language in US Society, I was able to learn more about this, and I couldn’t be happier to share it with others. While working on my research paper, I had to watch a few videos about catcalling. I only focused on one because it was related to one of the articles I used, but what was the most interesting to me was how the comment section of the video turned into a warzone to decide whether the catcalling was a compliment or sexual harassment. This inspired the writing of my paper. Many commentators were mentioning that women in general overreact when they are put in these certain situations.

Catcalling is a controversial topic. The arguments are divided into two camps, with some thinking such behavior is a compliment and others thinking it’s sexual harassment. Many men will claim that they are just being nice, while women can’t help but feel attacked. Sexual harassment can happen anywhere and might take different approaches; however, the labeling of sexual harassment differs among individuals and can be influenced by gender, gender roles, and even masculinity.

While any person can experience catcalling or sexual harassment, it is highly under-reported and generally directed towards women. Magley and Shupe (2015) note that two-thirds of women in the military have experienced some sort of sexual harassment, though very few decide to report it. Although catcalling can be found almost everywhere, attitudes towards catcalling seem to vary from person to person. A study by Ferrer-Pérez and Bosch-Fiol (2015) indicates that labeling something as “sexual harassment” is not clear-cut. Students at a Spanish university were given an exam where they were given different scenarios and asked if they considered them to be sexual harassment. Especially notable were the differences between women and men in judging whether or not a behavior was deemed harassment. For example, men were more likely to interpret a remark like “Hi beautiful, can I buy you a drink?” as a benign statement, while women were more likely to perceive it as a catcall with sexualized undertones.

Catcalling can be understood through theories of linguistic politeness. Brown and Levinson (1987) suggest that everyone has both ‘positive face’ and ‘negative face’. ‘Face’ is the public self-image that every person tries to protect. Positive face is “the positive self-image or personality claimed by interactants,” while negative face is “one’s desire that [their] actions be unimpeded by others.” Catcalling can be intimidating, and can threaten both positive and negative face. However, many people do not see catcalling as invading the other person’s privacy. On the topic of piropos (a Spanish term for catcalling), Bailey (2018) writes, “At another level, however, street remarks impose intimacy on passing strangers, thus flouting the normative conventions for interaction through which we manage social and personal risk and establish trust” (p. 2). Who would want to have someone you’ve never seen before approaching you randomly in the street and acting as if they’ve known you forever, as if they had a connection with you? I would venture to say that the majority of people would respond by saying no.

Interestingly, most men doing the catcalling expect the women to react a certain way. They want to capture their attention and get a reaction out of them. Yet women, for the most part, feel intimidated and harassed. Unfortunately, even approaching someone in the street and saying, “Hey beautiful” (Bailey 2017, p. 7) is an example of threatening one’s negative face. The women in these videos are forced to respond to meet expectations of politeness, yet their negative faces are being completely attacked. It’s a smart strategy to threaten one’s negative face in catcalling: the addressee is under pressure to perform to a speaker who is placing her in a subordinate position.

I’d like to think that most people who do the catcalling do not think that they are catcalling; they do not realize that they have threatened someone’s negative face. My research has shown me that there is much disagreement on how to interpret catcalls/piropos, with people seeing them as either compliments or as sexual harassment. It’s important to understand that these interpretations depend on one’s situation in society, as our experiences lead us to different views on what sexual harassment is. 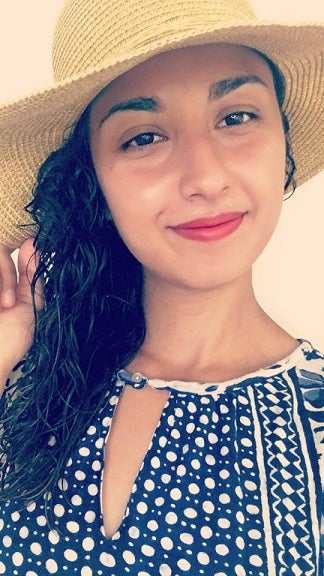 My name is Camila Soffia, I’m originally from Chile, but I’ve been living in the United States for ten years, so this is another place I get to call home. After struggling plenty to decide what to major in, I’ve picked economics and psychology. I love gaming whenever I get a chance (rarely) and going out to eat with friends and my boyfriend but as every college student, I’m normally on a budget.