Furry Culture and an 'Endearing' Register

Furry Culture and an 'Endearing' Register

If you have heard of furries, the first thing you may think of is probably not the most positive understanding.

Society has painted a simplistic, sexual, and unflattering picture of this group of people, but in actuality furries are a very well developed community of practice with a nuanced understanding of identity, relationships, and sexuality. This community has been developing for several decades. Even though pop culture presents a very negative view on furries, my study of the furry community shows that not only is the society not centered around sex as many believe, but it is also linguistically sophisticated in innovative ways.

For this study I surveyed 103 individuals through a social media website and and an instant messaging application. The survey consisted of three parts: a basic demographics section, a lexical item recognition and comprehension section, and a biographical section.

The data showed a range of interesting findings. The demographics section included a question asking the participants how much sex and sexuality plays into their interest in the furry community. The answers revealed that furries are interested in more than just sex. The results are indicated in the graph below, with 1 indicating no sexual interest, 5 indicating pure sexual interest, and 3 indicating evenly split interet. The graph reveals that almost half of all participants find sex and sexuality to be equally balanced with non-sexual interest. 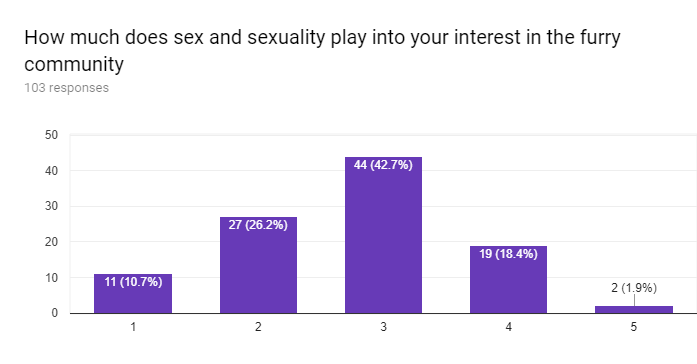 The lexical items section showed a great degree of shared understanding and usage of group-preferred and group-exclusive terms. One group-exclusive term I asked about was fursona. A sample response was “A self created character that is a representation of an individual in the furry character, also [referred] to as characters or avatars.” Most of the responses were along these lines.

In addition to the lexical terms, the biographical section demonstrated evidence for an “endearing” register. I propose that an “endearing” register used by furries is composed of two parts, a sexual component and a “cutesy” component. Both the sexual component and the “cutesy” component are made up of group-exclusive or group-preferred terms. In addition, they contain something called “roleplay language,” which is when one indicates actions directly through symbols like /*/. This symbol is often used with words like pounces and creates the furry-specific word *pounces*.

The lexical items section demonstrates a great degree of shared knowledge. The sexual component shows that there is some element of sexuality in the community, but the “cutesy” component shows that there’s more to it than just sex. In addition, the use of the register itself plays a large role in constructing the community: it is used to create an intimate but not necessarily sexual or romantic relationship between those who use it. 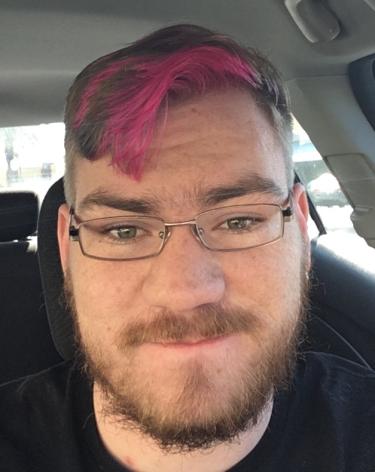 Jonathan Lilley is a candidate for the concurrent BA/MA program in linguistics at University of Colorado Boulder, potentially focusing on NLP. He has a variety of hobbies, including Dungeons & Dragons, Aikido, and baking, and he is passionate about his studies in linguistics