In the Oman ophiolite, water is stored throughout several hundred meters of fractured mantle rock that is actively undergoing low-temperature hydration and carbonation at temperatures below 60°C, producing waters that exhibit the unique chemical characteristics of serpentinization: high pH, H2 and CH4. The Oman system is an excellent opportunity for testing numerous hypotheses concerning thermodynamics, mechanisms and rates of reaction during low-temperature water-rock interaction, and how these water-rock reaction pathways control the extent of H2-generation and organic synthesis. This framework is essential for defining the in situ coupling of microbial metabolism to geochemical reactions, and the interpretation of isotopic, organic and mineralogical biosignatures of a primordial-type biosphere.

The Arabian Peninsula hosts one of the largest and best exposed ophiolites in the world. The ~500 km long, 50-100 km wide Samail ophiolite spans the northern coast of the Sultanate of Oman and the eastern portion of the United Arab Emirates. The mantle sequence is 3-8 km thick (Dewandel et al. 2005) and is comprised of peridotite (~30% of the ophiolite) (Kelemen and Matter 2008), overlain by gabbros. The original crustal material is thought to have formed at a medium to fast spreading mid-oceanic ridge (Hanghoj et al. 2010) and was obducted onto the Arabian peninsula as the Tethys seaway closed during the late Cretaceous (~95 million years ago) (Coleman 1981). The peridotite is 30-70% (100% in localized regions) serpentinized due to hydrothermal alteration that occurred both during obduction and during more recent weathering (Kelemen et al., 2011).
A 300 meter deep multi-borehole system and observatory, centered on a 300 meter water monitoring well (NSHQ-14) drilled 10+ years ago by the Omani Ministry of Water Resources, will be established in the peridotite aquifer in Oman in 2015 – 2016. This will enable access to the hydrogeochemical reaction zone in order to study the production and consumption of H2 and low molecular weight hydrocarbons and to seek associated microbial life. The International Continental Scientific Drilling Program and the Sloan Foundation will support drilling along the groundwater flow path from the inferred recharge area, across a region of Mg2+-HCO3- (pH 9) waters to Ca2+-OH- (pH 12) type hyperalkaline end-member fluids, in order to capture the pathway of modern water-rock interaction (Figure 1). Cored holes will also be drilled to sample the rock matrix using chlorinated drinking water to minimize contamination of formation waters with drilling fluid.

RPL investigators Shock, Templeton, and Schrenk are long-standing collaborative proponents for the investigation of active serpentinization in Oman through participation in drilling and observatory efforts led by collaborators Peter Kelemen and Juerg Matter. Kelemen is the lead PI on the ICDP and Sloan Foundation proposals, and Matter is the co-PI and Project Manager for the Oman Drilling Project. Together with co-PI Damon Teagle, they are establishing the framework for drilling and equipping boreholes with pumping and packer systems to isolate unique hydrological and geochemical regimes for in situ studies. RPL Co-Is Mayhew, Schrenk, Brazelton, Spear, Boyd and Hoehler have generated preliminary data with Templeton, Kelemen and Shock, through measurements of microbial community composition in hyperalkaline surface seeps, determining the presence of aqueous organic compounds, measuring aqueous geochemistry of waters stored in peridotite, and evaluating the Fe-speciation and mineralogy of rocks representing low-temperature serpentinization. 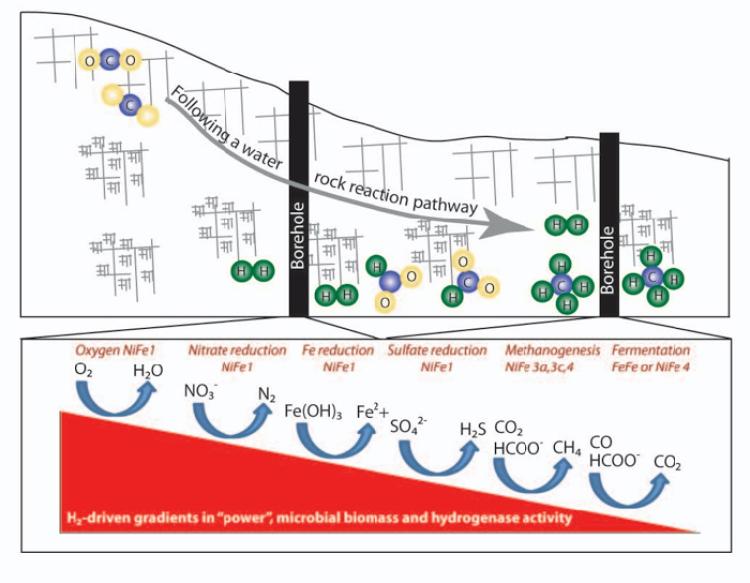 Figure 1. Schematic representing opportunities in Oman to utilize a borehole observatory aligned along a water-rock reaction flow path to measure progressive changes in disequilibrium, rates of production and consumption of energy sources, associated changes in aqueous and solid phase geochemistry, and changes in the activities of key enzymes as power and habitability vary.