Michel Fingesten was born Michl Finkelstein in 1884 in the village of Buckovice (Buczkowitz), Silesia, in the Habsburg Empire, now part of the Czech Republic, from a Czech-Jewish father and an Italian-Jewish mother, and died in 1943 in Cerisano, Calabria, after the liberation by the allies of the camp in which he had been interned since 1941. He was one of the most original and productive graphic artists and bookplates designers of the twentieth century. 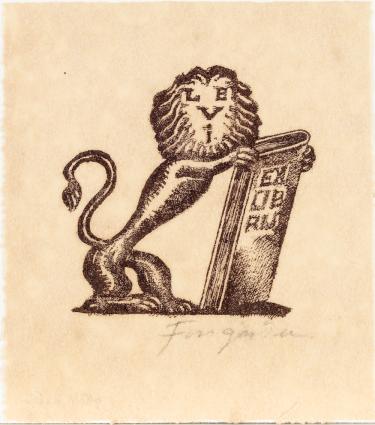 Little is known about his early years, though there is agreement that he studied art in Vienna and Munich, traveled to America, — where he spent four years and witnessed the 1906 earthquake in San Francisco, — China, and Australia, until in 1913 he settled in Berlin where he enjoyed great popularity as book and magazine illustrator. He fled Nazi Germany in 1936 and settled in Milan, where he built a circle of patrons who commissioned and avidly collected his works, until he was confined to the Fascist internment camp of Civitella del Tronto in 1940, and then transferred in 1941 to that of Ferramonti-Tarsia near Cosenza, Calabria. He died shortly after the liberation of the camp in 1943, apparently as the result of a woundinfection after surgery in a military hospital.

Fingensten was especially popular as a creator of bookplates or ex-libris (the Latin term meaning "From the books of…"), a genre that appealed to the taste of elites in the late 19th and early 20th century. Fingesten’s ingenuity was boundless even while working within severe spatial restraints, as the bookplates were usually pasted on the inside front cover of the collector’s books. In Fingesten’s hands, the bookplate transcends its utilitarian and decorative function and claims our attention as an independent work of art.

The university acquired in 2011 a large collection of Fingesten’s works, including 154 items, which had been assembled by an unknown collector, possibly Fridolf Johnson, bibliophile and editor of the American Artist Magazine for several years. Purchased with funds generously provided by the Program in Jewish Studies, the Fingesten Collection is now part of the CU Art Museum’s Permanent Collection. The selection has since grown with the purchase of a full set of ten extraordinary etchings, the 1916 series 10 Eaux-Fortes de genre phantastique, symbolique, grotesque, lyrique, satyrique, tragique sur des motifs érotiques (10 Etchings of the Fantastic, Symbolic, Grotesque, Lyrical, Satirical, Tragic Genre on Erotic Motives).

There is still much work to be done on Fingesten, both on his biography and his art, and the purchase of this collection allows scholars at CU to engage in pioneering research and bring due recognition to this extraordinary artist.

If you would like to learn more about this collection, please email Professor Davide Stimilli at Davide.Stimilli@colorado.edu.