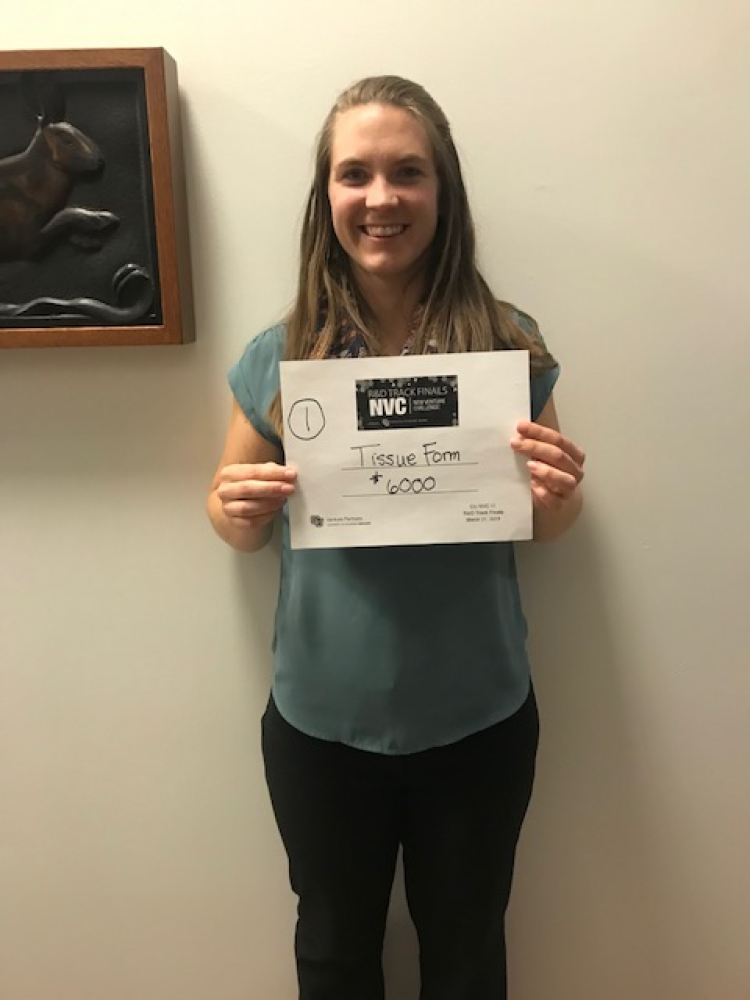 Last but not certainly not least, we're excited to announce TissueForm as our fifth NVC 11 Championships finalist!

Competing against five teams in the NVC 11 Research & Development (R&D) Track Finals competition (hosted by Venture Partners at CU Boulder), TissueForm took home the first place prize and $6,000 after pitching their business idea to a panel of judges and a live audience.

"ClayMatrix™, is a dermal filler material whose proprietary composition can last much longer than current hyaluronic acid-based fillers on the market, like Juvederm and restylane," Barthold, co-founder and director of research and development for TissueForm said. "This dramatically decreases the number of repeat injections a patient must receive to maintain their desired appearance, and therefore improve self-confidence."

The other R&D Track Finalists of the night included:​

TissueForm was also the winner of the NVC 11 Women's Entrepreneurship Prize, which is awarded to an NVC 11 team with at least one female founder. Teams vie for the prize by competing in an additional pitch competition outside of the NVC Track Semi-Finals, Finals and Championships.

"The Women’s Entrepreneurship Prize competition itself meant a lot to me. It was the first time I have ever been at a startup event where a majority was female," Barthold said. "I was grateful to win the competition because all of the women brought their pitching A-game and the technologies pitched represented a range of very important topics."

TissueForm will be one of five teams competing in the NVC 11 Championships on Wednesday, April 3 at the Boulder Theater.

Barthold said that the opportunity to win the $200,000 prize is an "invaluable opportunity" for the company, but this hasn't been the company's only win. TissueForm most recently won a $125,000 grant after competing in the Lab Venture Challenge, hosted by Venture Partners at CU Boulder in November 2018.

Register Now for the NVC 11 Championships!