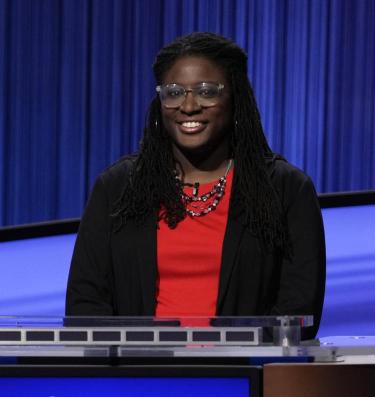 Ashleigh Lawrence-Sanders, an assistant professor of U.S. and African American history, is one of 15 educators from colleges and universities across the country who will compete for a $100,000 grand prize and a spot in the show’s upcoming tournament of champions.

Lawrence-Sanders, who joined CU Boulder’s history department this fall, has watched Jeopardy! since she was six years old. She used to play along with her parents as they watched.

“It’s kinda the coolest, nerdiest thing you could do,” she said. “It’s this sort of quintessential American show that translates across generations and backgrounds.”

In her first audition, Lawrence-Sanders completed an initial 50-question, 15-minute test online, followed by another test via Zoom while a Jeopardy! producer monitored it.

After making it through that round, she was invited to a virtual tryout with other applicants, during which the potential contestants were broken into groups of three to compete in an abbreviated mock version of the game.

“I really wasn’t expecting to hear from them after that,” she said, noting that 100,000 people apply for the show each year, and only 400 to 500 people become contestants.

Then in September, Lawrence-Sanders received a call from a Jeopardy! producer who invited her to be a part of the show’s first-ever professors tournament.

“It was definitely a dream come true, but it was also very nerve racking,” she said. “I’ve definitely found a whole new appreciation for the contestants.”

She prepared for the tournament by re-watching old episodes every night. She realized she was strongest in popular culture, literature, geography and music, but needed brushing up in general science.

“There’s this humility that comes in preparing,” she said. “All the judgment you have toward the people on TV kind of melts away when you realize you're going to be in a position very soon where everybody else is going to be at home judging you.”