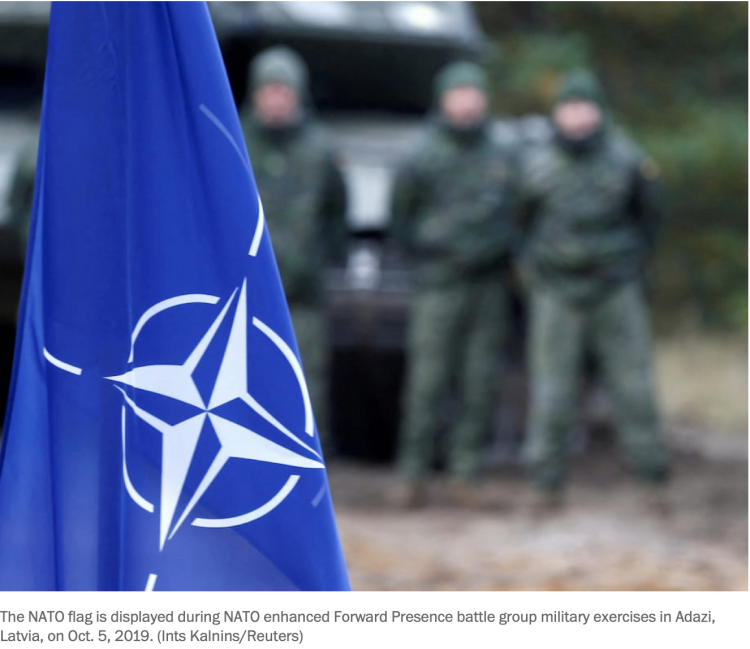 The West, in Putin’s view, is not practicing proper geopolitical distancing — and is getting too close to Russia for comfort. Two rounds of diplomatic talks last week between Russian and Western officials ended without defusing the situation on the border with Ukraine. Further talks are planned this Friday.

What do Ukrainians think? Left out of this debate, but central to it, are the views of ordinary Ukrainian citizens. In December 2019 we ran a survey experiment that posed a fictional scenario of encroachment and crisis between NATO and Russia. Results from these interviews of 2,212 Ukrainians — a nationally representative survey across all government-controlled regions of Ukraine — reveal how divided Ukrainians are about NATO conducting military exercises close to Russia. Respondents in the east and south of the country were much more likely to view these exercises negatively. Within Ukraine, as within discourse on security more broadly, location really does matter.

Geopolitics 101: a preoccupation with proximity

“Great powers are always sensitive to potential threats near their home territory.” This, to eminent international relations scholar John Mearsheimer, is Geopolitics 101. Anxiety about the proximity of rising security threats, particularly from rival military alliances, is not unique to Russia — it’s characteristic of all large territorial powers, including the United States and China. Indeed, the United States invented the idea of a self-declared exclusive neighborhood sphere in 1823 with the Monroe Doctrine.

Russia’s preoccupation with NATO expansion has been a consistent feature of the contest between the West and Russia over Ukraine and the Republic of Georgia — and particularly since this contest was radicalized by war in Georgia in 2008 and then Ukraine in 2014. But the sources of Russia’s actions are more than Geopolitics 101: There are complex historical legacies at play in post-Soviet space, along with strong emotions.

Yet Russia’s leadership is clearly preoccupied with proximity. On Dec. 23, Putin told viewers during his annual news conference: “It is the United States that has come to our home with its missiles and is already standing at our doorstep. Is it going too far to demand that no strike systems be placed near our home? … What would the Americans say if we stationed our missiles on the border between Canada and the United States, or between Mexico and the United States?” Strategic depth — the maintenance of a buffer between the Russian heartland and powerful European adversaries — has long been a critical security tenet of Russian defense.

In 2020, we organized a series of surveys of geopolitical orientations in several former Soviet republics bordering Russia, including Ukraine. As part of this project, we included a scenario involving a NATO military exercise and stressed to respondents that this was fictional. The specific text noted: “NATO is conducting a naval exercise close to Russian territory. A Russian fighter aircraft is taking a closer look at what NATO is doing when it crashes into the sea.”

We then randomly assigned survey respondents to read one of several different statements about the outcome of the crash. In Ukraine, our survey was nationally representative and the questionnaire was administered in face-to-face interviews in government-controlled areas.

All respondents, regardless of which fictional outcome they viewed, were then asked the following question: “Should NATO conduct military exercises close to Russia’s territory?” Remember this question came after suggesting a fictitious Russian plane crash, so it is not an abstract question like those we asked about Ukraine’s position between East and West and the stationing of NATO troops on Ukrainian territory.

The key takeaway is that across Ukraine support for NATO exercises near Russia showed only 21 percent in favor, with 53 percent opposed, 24 percent unsure and 2 percent who refused to answer the question. But like almost all political questions in Ukraine, there are large differences across regions and by self-identified nationality, as seen in the figure below.

In all but western Ukraine, opposition to NATO exercises near Russia outstripped support. In the western regions, 39 percent of respondents were in favor — they were five times more likely to support NATO exercises than respondents in the south and east (8.3 percent and 7.1 percent respectively). The extent of the regional disparities on this question are unusually large. 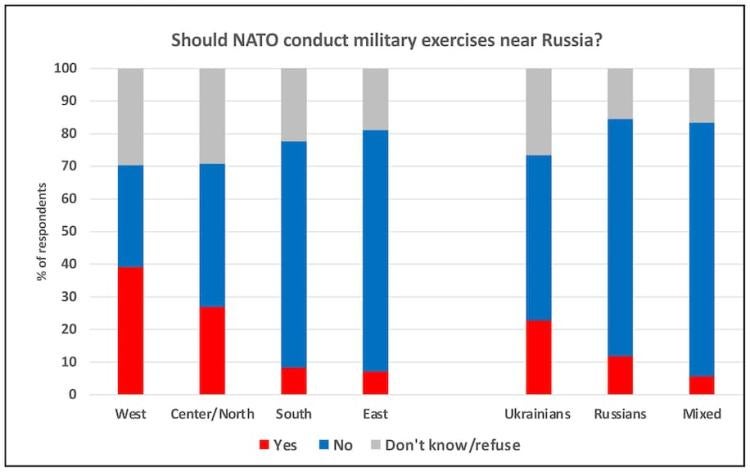 What does this tell us about Ukraine and ‘red lines’?

Of course, this survey question posed a hypothetical scenario — but one inspired by real events. Dangerous military encounters between NATO allies and Russian forces have increased considerably in recent years. One study recorded some 2,900 reported events of NATO allies and Russia conducting missions that brought them into proximity with one another between 2013 and 2020. Putin complained about provocative military exercises in the Black Sea and about Western strategic bombers, with “very serious weapons,” flying close to Russia’s border.

With NATO refusing to rule out eventually expanding to incorporate Ukraine, Russia has upped the ante considerably by massing a potential invasion force near Ukraine’s borders to assert its security “red lines.” In talks this month with Russia, U.S. officials raised the possibility of placing restrictions on military exercises, a move our study suggests regular Ukrainians would welcome.

Two years ago, the idea of geographic restrictions on NATO military exercises resonated with Ukrainian citizens. Today, a Russian invasion threatens to silence their views completely.

Gerard Toal, professor in the School of Public and International Affairs at Virginia Tech’s campus in Arlington, Va., is the author of “Near Abroad: Putin, the West and the Contest for Ukraine and the Caucasus” (Oxford University Press, 2019).

John O’Loughlin, college professor of distinction at the University of Colorado at Boulder, is a political geographer with research interests in the human outcomes of climate change in sub-Saharan Africa and in the geopolitical orientations of people in post-Soviet states.

This article has been reprinted from the Washington Post, Jan 19, 2022.