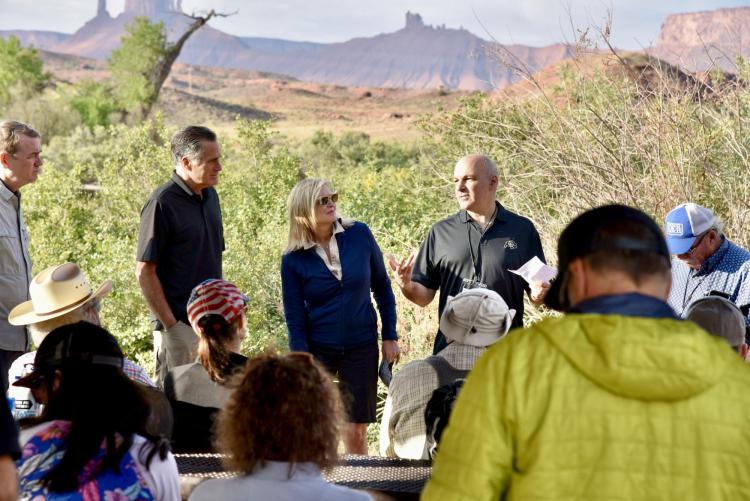 I was recently invited to take a river rafting trip on the Colorado River with Senators Michael Bennet (D-CO) and Mitt Romney (R-UT), among others, and to provide a scientific perspective on climate change and its impacts on the western United States. The purpose of the trip was to draw attention, in a bipartisan way, to some of the challenges that climate change is bringing to the way we live, and to discuss approaches to meeting those challenges.  One of the most impactful ways climate change is affecting the western U.S. is in the form of drought and water stress – a sense that was made clear by the very low and slow-moving Colorado River. On the bank of the river, before we put into the water, each of the senators made statements about the challenges we face with diminishing water availability, which affects livelihoods, economic interests, human health, ecosystems, recreation, and so much more. Both spoke eloquently about the importance of understanding and effectively managing climate change. After they spoke, I provided a summary of what the science and data are telling us about the changes we are seeing, what the future is projected to look like, and the challenges that we in the west, as well as our fellow citizens across the nation and world, are likely to face.

As I spoke, I was struck by the way in which these two men, as well as the other members of the trip — with a range of backgrounds and political perspectives — nodded in affirmation at what I was telling them.  While I was the scientist, summarizing findings and providing the latest scientific information, some, such as the ranchers, were actually living with these climate stresses. Some, like the senators, have the responsibility to try to enact policies that seek to limit and manage those stresses. One, a tribal chairman, lamented the change to the lands that were sacred to his people, that they had found harmony with and that nourished them for many generations. A water manager described the unenviable task of trying to ensure optimal use and distribution — within political, moral, and legal constraints — of this dwindling resource that so many of us take for granted. Each was nodding with a shared, yet distinct, familiarity borne from their own experiences and perspectives.

The senators spoke of the need to understand these changes and the implications for water resources in their states. They spoke of the need for research and the need to adopt effective practices to manage not just what is certainly coming, but in many ways is already here.  And as was the intent of the trip, and is often the case when we speak face-to-face, partisan lines were absent. Our attention was focused on the beauty of our surroundings and the imperative to meet the challenges that lie ahead.

We shared a gentle raft-ride down the beautiful Colorado River; we shared stories of how we experience the land and water and how climate change threatens those ways. And most of all, we shared time and purpose – different people from different backgrounds brought together for one beautiful and meaningful day. And on that day, we weren’t different; we were the same.