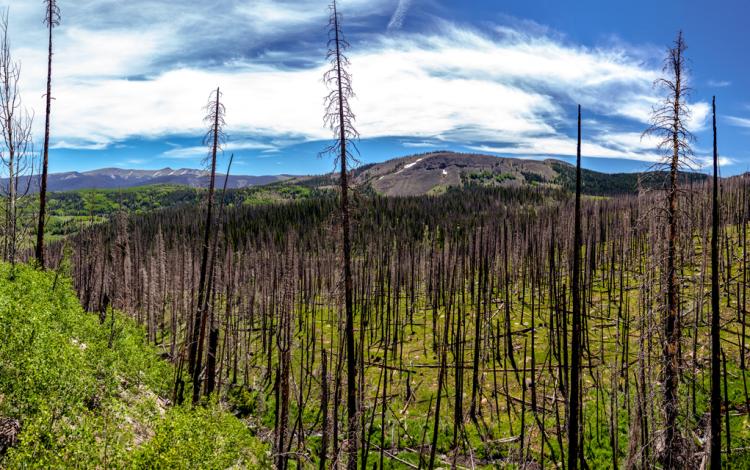 Conifer trees — spruce, Douglas fir, and pine trees —  make up many of Colorado’s subalpine forests, essential habitats for many of the state’s birds and small mammals. These historically dense forests are also essential for sequestering and storing carbon, and hold snowpack during the winter, making them necessary in preserving the state’s water resources. Frequent spruce beetle outbreaks, however, are now coinciding with large-scale wildfires to fundamentally change the way these forests naturally regenerate.

A recent study led by Robert Andrus, recent CU Boulder Ph.D. graduate in physical geography, tracks the compounded disturbance interactions of more frequent spruce beetle outbreaks with increasingly devastating wildfires, and the effect this has on subalpine forest regrowth in the San Juan range of the Rocky Mountains. According to his research, an area that experiences a spruce beetle outbreak prior to a wildfire regenerates at a drastically lower rate than forests that have only experienced either beetle kill or wildfire. Climate change seems to be the main driving force: warming temperatures create drier conditions, which puts stress on the trees and prolongs the survival rate of bark beetles.

Historically, bark beetles — like the spruce beetle — and the trees they attack have co-evolved and cultivated a somewhat symbiotic relationship, with forests showing a relatively high rate of recovery after an outbreak as these beetles typically appear in low populations and kill only weak or dying trees. Now, however, the beetle populations are more abundant and are no longer just killing weakened trees, but mature conifers. Plus, the number and severity of outbreaks are increasing and coinciding (within a span of 2-8 years as documented in this study) with severe wildfires caused, at least in part, by drought and increased temperatures. According to previous research conducted by Andrus, a spruce beetle outbreak does not necessarily increase the severity of a wildfire in a region; there is no known link between these disturbances, but when combined they can convert Colorado’s dense forests into grassland and in turn shift entire ecosystems.

“As ecologists we don’t comment on this and say it’s good or bad,” Andrus says. “We’re just interested in how things are changing — and they are changing quickly.” 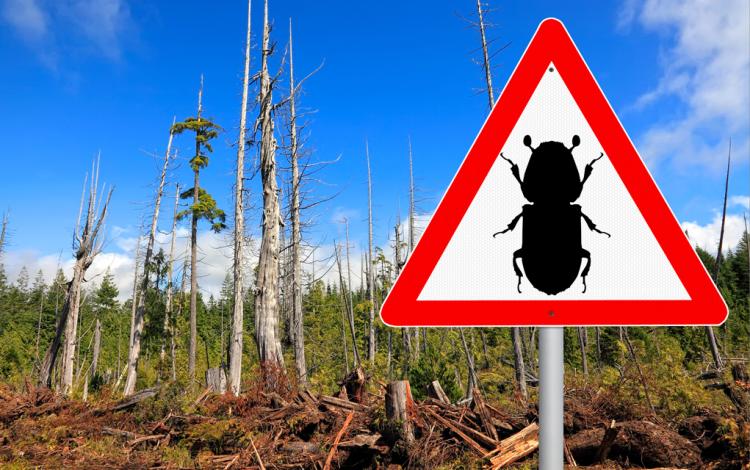 The latest major bark beetle outbreak in Colorado began in 2005, killing mostly large, dominant spruce trees, many of which were easily over 100 years old and produced the most seed (and conifers regenerate exclusively by seed). Andrus’ research shows that if the same forests that experience beetle kill also succumb to a wildfire in the years after, then there isn’t enough seed in the burned areas to regenerate the species, severely stunting forest re-growth.

“The combined effect of bark beetles knocking out the major seed sources and subsequent wildfires means there just won’t be enough seeds available to allow them to recover within the fire perimeter,” Andrus says.

It’s important to note that this research only covered fires in Rio Grande National Forest in the period between 2012 and 2020, and the state’s mature conifer forests can take over a century to replenish; however, short-term recovery is indicative of long-term recovery, and “with continued global warming, there will come a time when conditions caused by climate change exceed the forests’ ability to recover,” Andrus says.

2020’s East Troublesome Fire in Grand County — which burned more than 190,000 acres and is the second largest wildfire in state history — also occurred in an area previously affected by beetle kill. While Andrus says there is still no definitive data about how this will affect regrowth in the area, he says that spruce beetles, pine beetles and western balsam bark beetles are likely the pests that affected this area.

Regardless, the research team is hopeful that their work will be useful in “developing adaptive management strategies in the context of warming climate and shifting disturbance regimes,” they write in the report.

“Our goal with this research was just to show under what conditions forests will not recover. We’re just showing the trends,” Andrus explains. “It’s up to land management to look at it and decide, ‘Do we want to maintain some of these areas as grasslands? Or do we want to replant some areas?’ They have to take it from here.”

See the article in Boulder Weekly