Henry Lovejoy: The Collapse of the Slave-Trading State of Oyo: A Predictive Model of the Flow of People Involved in Pre-Colonial African Warfare to Cuba, Brazil and Sierra Leone, 1816-1836 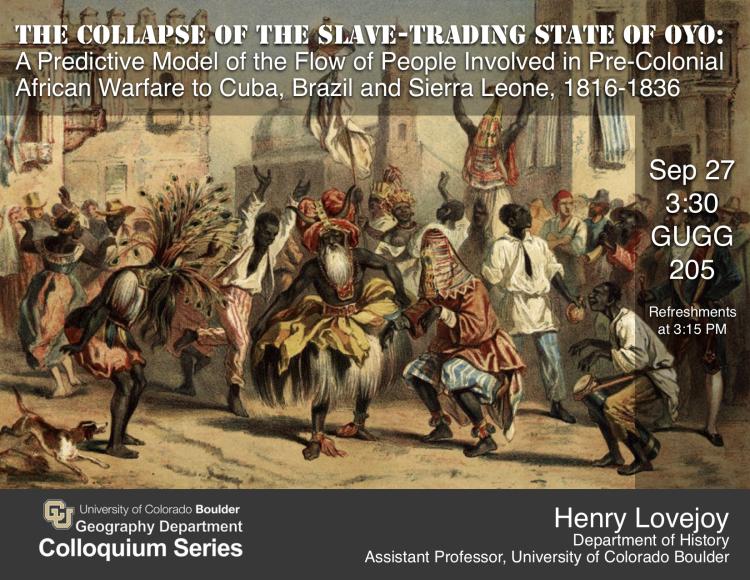 While scholars have amassed large amounts of data related to the transatlantic slave trade, a more pressing question lingers: Where did those 12.7 million people come from within pre-colonial West Africa before boarding slave ships destined for the Americas? The answer is complex for two reasons: 1) many sub-Saharan peoples did not have written orthographies until the mid-to-late nineteenth century (suggesting their histories were largely undocumented); and 2) Africa lacks reliable historical maps compared to other heavily populated regions of the world (meaning internal geo-political transformations are frequently misunderstood, especially before the colonization and decolonization of the continent). This digital mapping project seeks to visualize and calculate the probabilities of African origins of enslaved people in diaspora by using two open-source applications: Quantum Geographic Information System and R Project for Statistical Computing. This case study focuses on the internal and external migrations of Yorùbá-speakers from the region of southwestern Nigeria and the collapse of the major slave-trading state of Ọ̀yọ́ between 1816 and 1836. By presenting geo-referenced data of intra-African conflict alongside slave ship departures, it is possible to generate statistical models capable of predicting large-scale, inland migrations on an annual basis. This interdisciplinary project appeals to scholars interested in exploring the relationship between conflict, slavery and abolition in the Atlantic world.

Henry Lovejoy specializes in the history of Africa and the African Diaspora in the Atlantic World during the era of the transatlantic slave trade. My book is Prieto: Yorùbá Kingship in Colonial Cuba during the Age of Revolutions (Chapel Hill: University of North Carolina Press, 2018). His website, www.liberatedafricans.org, traces the lives of over 250,000 enslaved Africans involved in international efforts to abolish the Atlantic and Indian Ocean slave trades after 1807. This project has partnered with MSU’s Linked Open Data hub, www.enslaved.org. In collaboration with the “Laboratory of Interdisciplinary Statistical Analysis” (LISA), I am developing historical GIS methods with statistical models to determine when and where enslaved Africans originated within pre-colonial Africa; and when and where they went in diaspora. To support the relaunch and archiving of Slavery Images with a IIIF framework and 3D data, www.slaveryimages.org, I have partnered with Trimble Inc., UNESCO, and Brumfield labs. My research been receiving support from the National Endowment for the Humanities, Andrew W. Mellon Foundation, Social Sciences and Humanities Research Council of Canada, Fulbright-Hays, The Hutchins  Center for African and African American Research at Harvard University, and the University of Colorado Boulder.