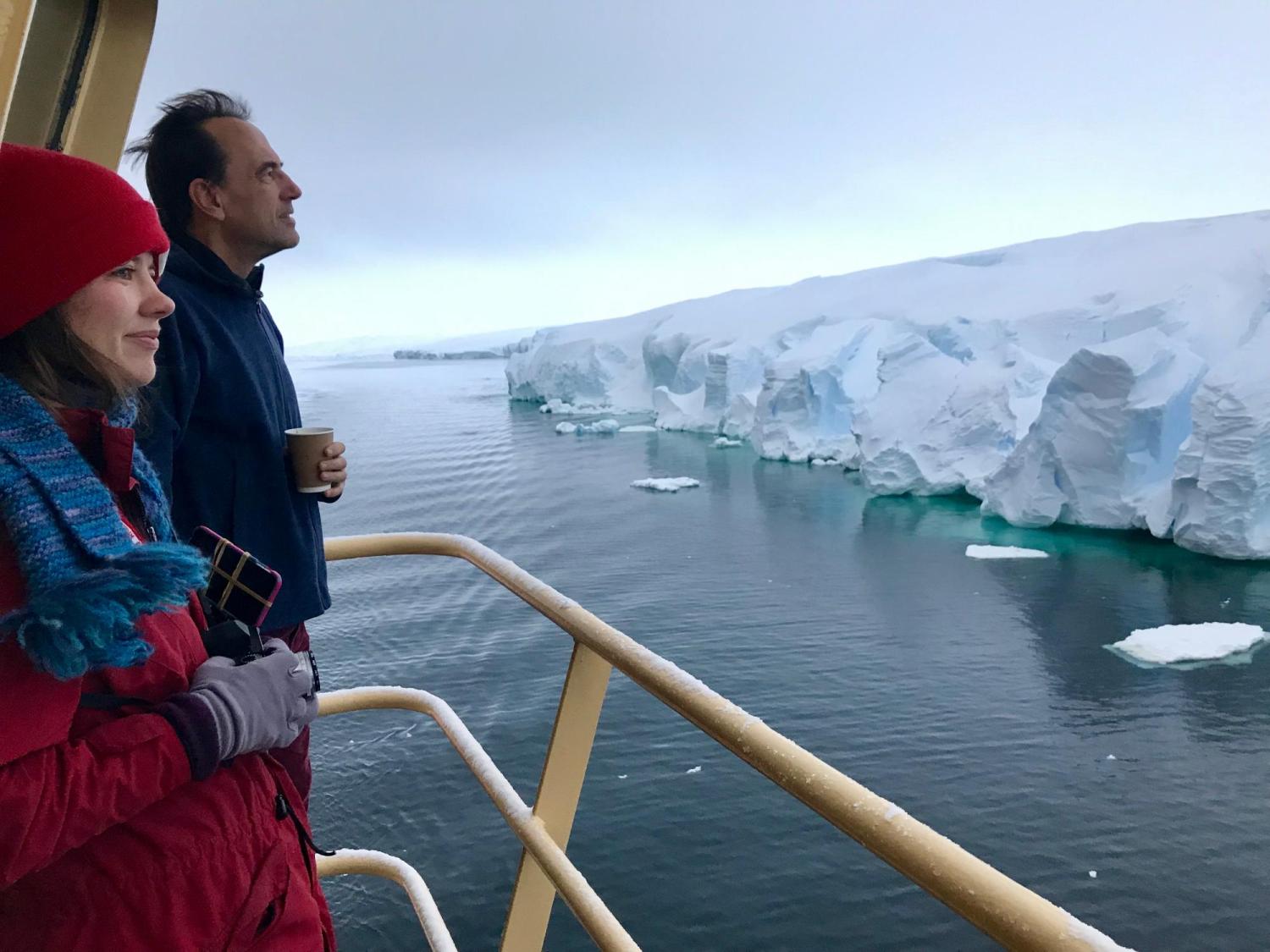 Thwaites - Jeff Goodell, a journalist from Rolling Stone Magazine, and Elizabeth Rush, a book writer from Brown University, have their breakfast coffee looking over the ice front of Thwaites ice shelf. The icebreaking research vessel Nathaniel B. Palmer cruises a few hundred meters from the ice cliff that, in some areas, stands over 60 feet above water and more than 800 feet below.

I stood looking out my window watching the rain fall in my greening yard in Boulder, Colorado, soaking in the muffled sounds and vibrant colors I hadn’t experienced in a while. I realized after a few moments, I was swaying slightly back and forth. Not swaying as I breathed, but to a rhythm that had embedded into my body over the last two months: the rolling of the ship over the long Drake Passage swells. They call it “dock rock,” the sensation of being on the ocean when you’re on land. It comes from your body becoming used to and compensating for a ship rolling beneath your feet, known as getting your “sea legs,” which matters a lot to me because it ends my gnarly seasickness. Today, my dock rock was a really nice reminder that I had been there; our research at Thwaites Glacier in Antarctica was real and not a surreal dream of another world, even though it often feels that way as soon as I set foot back on land.

It has been just a week since I returned from Chile and my research cruise in Antarctica. We left the ice of the Amundsen Sea 16 days ago on March 15th, and since travelled across the large swells of the Drake Passage – known for the worst seas in the world – to Punta Arenas, Chile. We were 56 scientists, support staff and crew that had sailed for 54 days on the icebreaking research vessel Nathaniel B. Palmer, a 308 ft long ship that included something like 60,000 square feet of space. For the last two months, our steel island had nothing exchanging with the outside world except water, mud, and a few emails and phone calls.

Our mission had been to conduct the first season of research for the International Thwaites Glacier Collaboration (ITGC), a five-year joint research endeavor between the U.S. National Science Foundation and British National Environmental Research Council. A more than $40 million-dollar research endeavor funding nine separate research projects, the ITGC aims to better resolve the past behavior, current state, and future predictions for the Thwaites Glacier. With about three meters of global sea level frozen in the ice behind Thwaites and the neighboring Pine Island Glacier and our high uncertainty on what to expect from the glacier, Thwaites embodies the biggest “wildcard” for future sea level rise on the planet. This first cruise on the Palmer was meant to start the ball rolling on the ITGC research to determine what we can expect from Thwaites: “How much, how fast.” We could not have had a more successful season.

I smile to think how much has happened since that first day we spotted the ice on February 5th... “Iceberg! Starboard beam1.” I was sitting at my computer typing and I think it took a second to sink in for me and everyone else in the room. Then we were all on our feet in a flurry, rushing to each of our personal stashes of camera equipment scattered throughout the ship, and up to the bridge on the 05 deck, five levels up a monotonous steel staircase from the main deck of the ship. I opened the hatch (door on a ship) and, as I stepped outside, I saw the bright white island towering a half-km. from the ship. Then I heard everyone’s exclamations. “Whoa!” “So beautiful.” “I never imagined the scale.” Clicking filled the air as all of the scientists’ cameras worked hard to capture every angle of that first sighting. Measuring larger than a football field across, about 60 ft above the water, and riven with intricately-carved ice patterns and bright indigo fissures, the scale and magnificence of the berg was beyond what first-timers to Antarctica could have imagined. On our way to Thwaites Glacier, though, this berg paled in comparison to what we would soon encounter, and sightings would become as commonplace as seeing a car on the street in Boulder. 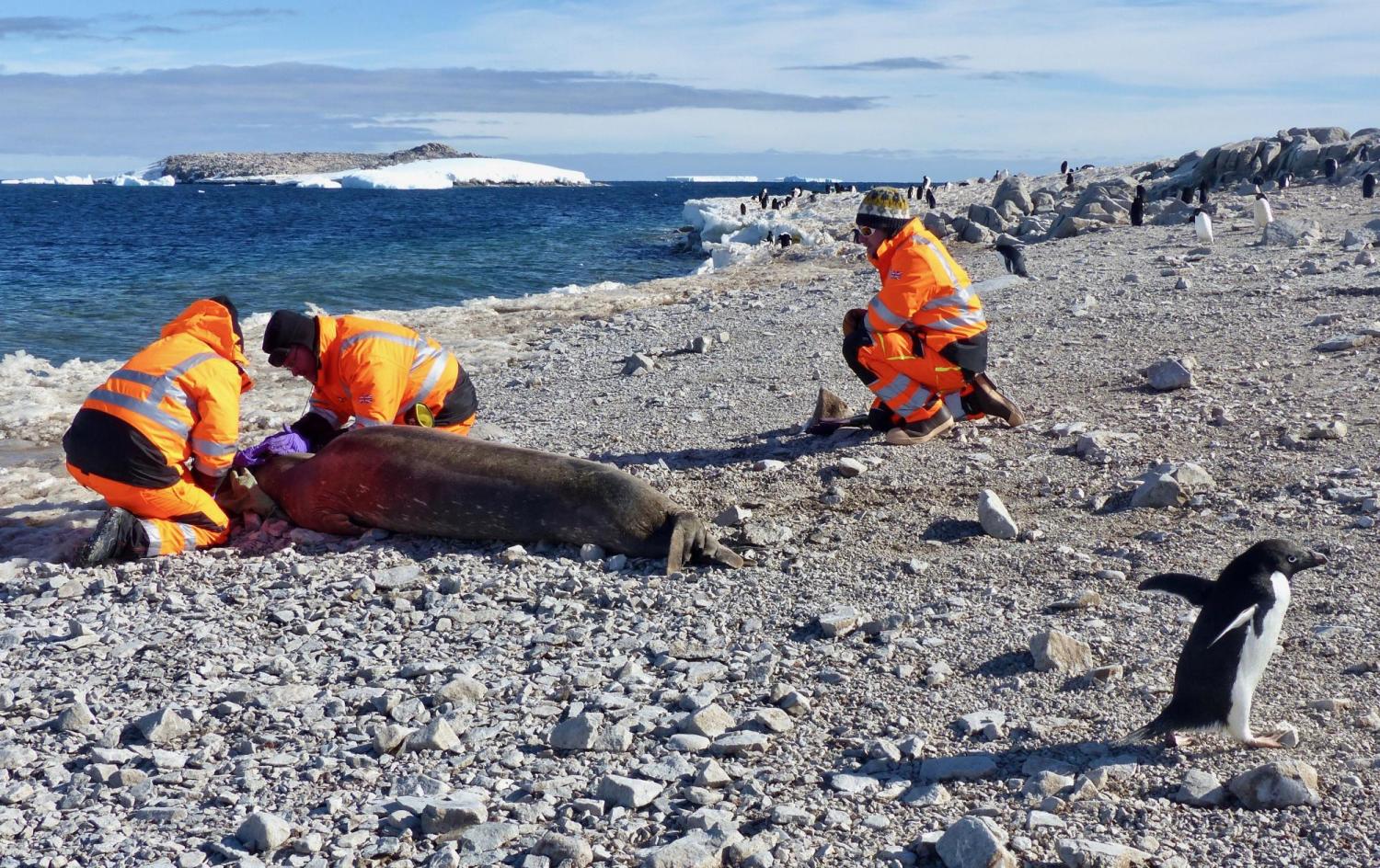 Seal - Gui Bortolotto and Lars Boehme (left to right) tag a sedated seal while Mark Barham and a few Adélie penguins look on. The tag is an oceanographic instrument that measures ocean conductivity (for salinity), temperature, pressure (for depth), and location whenever the seal dives. The data gets transmits to satellites when it surfaces. With 12 seals tagged, they have made over 1000 dives in the month since they were tagged, with a few as deep as 1000 meters. The tags will fall off when the seals molt again in a year.

Since that first iceberg sighting over two months ago, we accomplished more oceanographic and geological research than we had expected for a single Antarctic research cruise. We tagged 12 seals with small oceanographic instruments that will capture the water measurements we need to understand how much heat the ocean delivers to the glacier and how much melt it is causing. Our geologists onboard captured most of what they need to reconstruct past ocean and ice changes at Thwaites Glacier, creating maps of geologic features on the seafloor, acquiring history records from marine sediment cores, and picking up a few penguin bones and rocks along the way to age-date past glacial changes. We sent a $4 million dollar, cutting edge autonomous underwater vehicle – named Ran after the Norse goddess of the sea – on its maiden voyage under the floating portion of Thwaites Glacier to get the first-ever water measurements and seafloor maps beneath the ice (to learn more about any of these, check out my Snow on Ice blog at www.thwaitesglacier.org/blog). All of this work integrated together will fill in large gaps in our understanding about the past and present state of Thwaites.

While I played a small scientific role onboard and took every opportunity to immerse myself in those scientific discoveries we made, my primary role onboard had less to do with science and more to do with people. I was the media facilitator, which is an enigmatic, but likely emerging, role in science as we learn how to bridge the communication gap with the public. Most people immediately think blog writer and outreach, which, yes, I did a lot of. But most of my time went toward facilitating interactions between three media who joined for the entire cruise, and the scientist. Imagine putting mainstream journalists onboard a ship for two months, 24/7 on-the-record, with 23 scientists, to report on day-to-day scientific endeavors and life onboard. The two groups’ approaches to communication are like night and day: scientists conservative and focused on what’s best for the science, journalists oriented toward grabbing the attention of their readers with sensational stories. My goal was to help both groups to synergize with the other as much as possible, while reducing discontent and negative impacts on both group’s goals. It meant that I mediated between a scientist and a journalist about what “off-the-record” meant. I helped the media to navigate the fine line between their occupational ethics of not having their reporting censored and the idea that a couple inaccurate words could put scientists onboard or their families at home in a really bad situation. And I had to jump into the science planning at times to make sure the media were given exposure to the more challenging scientific activities for their important media pieces. I lucked out that I had three incredible journalists that shared the two most important values with the scientists: to report accurately and to help science and climate change.

I am proud to say that the media and scientists together accomplished so much more than I imagined. The media broadcasted our story to the public through Rolling Stone Magazine, Public Radio International’s The World, BBC, National Geographic, and a soon-to-be creative non-fiction book. After over 300 interviews over the eight weeks, the team amplified the ITGC research beyond what scientists can typically achieve alone, reaching hundreds of thousands to tens of millions of people per media venue with incredible stories about the scientists onboard, the importance of their research, and the magnificence of Antarctica.

We accomplished a tremendous amount of work for one season and we had so many momentous days in the field. Of all of it, though, my first sighting of the front of Thwaites Glacier will stay with me as the most breathtaking and impactful I’ve had so far in my career. I remember vividly, the winds were calm and seas still as glass. A high fog sat all around the ship, shrouding the sky with a gray gloom, but contrasting the ice features to make each chiseled ridge, brilliant blue fractured cut, and etched ice layer visually striking. The conditions so peaceful, the Captain felt comfortable following the 120-kilometer-long ice front with the ship for most of the day at a distance of only a few hundred meters from the ice. Standing five decks above the waterline on the ship, it felt like I could almost reach out and touch the glacier. The first half of the ice front we followed were high ice cliffs towering over 60 feet above the water. Then we reached the portion of the ice front that we knew to be sitting over deep troughs that held lots of warm water. The ice suddenly looked completely mangled, the uneven surface often sloping down to the water line and fractured into blocks of ice ready to break off at the slightest breath. Of this more fractured ice, an area over four kilometers deep and tens of kilometers wide broke off only two days after we were there at the ice front, giving testament to its fragility. The reality of it struck me hard as one of those neon signs reminding me of why I got into this field in the first place and why the work of ITGC was so vital to both the future of Antarctica and people thousands of miles away who will be impacted by it.

Being back in Boulder now, surrounded by rain, plants, and people, my two months in Antarctica mostly feels like a dream: completely different people, landscape, and even motions beneath my feet. So it’s nice to, every once in a while, have a little reminder that it was real.

1Nautical term for right side of the ship in the 3 o’clock direction.