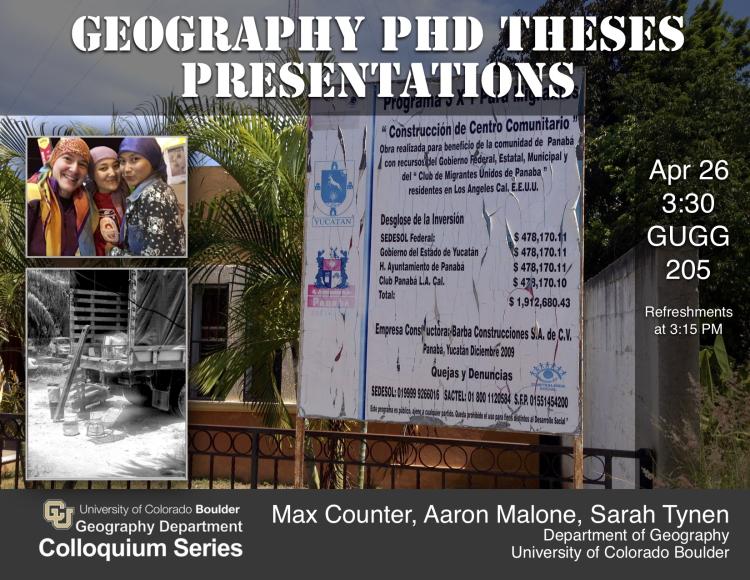 April 26 is the last colloquium of the semester. It features three different graduating PhD students doing short presentations of their theses.

This paper examines the transnational / translocal landscapes of migrant organizing and state diaspora policies. Examining early diaspora engagement practices, Smith and Guarnizo (1998) debated transnationalism from above and from below. With diaspora policies rapidly spreading, I examine what kinds of spaces are being created and how this transnationalism from above interacts with grassroots and informal patterns from below. I build from the critical development literature, which argues that participatory programs create “invited spaces” that mostly reinforce the status quo, in contrast to the rarer autonomous spaces of radical challenge or grassroots alternatives. Focusing on Mexico’s famous diaspora policy, the 3x1 Program, I go a step further to argue that the institutionalized interactions between the state, migrant organizations, and migrants have created a landscape of autonomous, invited, and “simulated” spaces – the final category recognizing that the financial resources made available through the diaspora program have motivated attempts to fabricate and falsify trans-local migrant organizations. These “phantom” or simulated migrant organizations further complicate the transnational landscape, raising important questions about participation, agency, and the dynamics between states and migrant organizations in the era of diaspora policy.

Land grabbing at the legal crux: Forced displacement and land restitution in Colombia
by Max Counter

Colombia’s armed conflict has entailed industrial-scale land theft, foreshadowing the Inter-American Court of Human Rights historic 2005 judicial designation of “land grabbing” as a human rights violation. “Land grabbing”, as the violent dispossession of rural, afro-descendent and indigenous populations’ land for agro-industrial and mining use, has served as a central heuristic for understanding Colombia’s armed conflict. Against this background, and focused on Colombia’s 2011 “Victims’ and Land Restitution Law”,this paper looks “beyond” land-grabbing in two facets. First, it examines land restitution as a means of undoing violent patterns of land grabbing. Secondly, it questions how violent patterns of displacement might be legally rectified without presupposing that those who currently own dispossessed land necessarily obtained property through land grabbing processes. Examining land restitution in Colombia’s Magdalena Medio, I detail the legal measures used to prosecute legacies of land grabbing, as well as the controversy arising when those powerful legal measures are trained upon relatively small, “good faith” owners of once-dispossessed land. This paper approaches land restitution as an important means of undoing violent patterns of land concentration, yet cautions against presupposing that all patterns of violent displacement can be understood through a land-grabbing analytic. Land may be dispossessed using overt, coercive violence or, following critical scholarship from Diana Ojeda and others, through subtle forms of “everyday dispossession” (despojo cotidiano). How land restitution programs detect and manage these distinctions bears upon post-conflict legal land regimes’ precarious capacity to either ameliorate, or potentially exacerbate, violent legacies of forced displacement.

Ideological and material state power result in the experience of uneven state power that affects people’s lives, especially at the scale of the body, household, market, and neighborhood. State power is both repressive and uneven, as well as ideological and material, in working at the level of the neighborhood and everyday life. The strikingly visible aspects of Chinese state power in Xinjiang overlook the invisible and nefarious aspects of the everyday violence of the nation-state. I use long-term ethnographic fieldwork to study some of the more invisible aspects of state power at the scale of the body, home, and market, such as the community (shequ) bureaucracy and development discourses. In drawing on observations of tight state control, I ask the question: How does a government rule with coercion or consent, and how do people respond? In exploring this question, I provide a examples from Xinjiang to show how state building and dispossession occurs in China and the effects that this has on everyday life for ethnic minority and majority groups. Specifically, I look at the effects of state power, especially how the multiplicity and complexity of state power is experienced when it comes to people’s daily tasks. I examine how individuals create social space in heavily regulated and securitized state space. State control permeates people’s lives in disruptive ways, which shows the everyday violence of the cultural politics of the nation-state. Meanwhile, Uyghur cultural performances at scales of the body and household reflect affiliation with the Muslim world that disrupt the national Chinese imaginary and the false assumption of territorial control as an all-encompassing static container.