Williams Village East is a new 700-bed residence hall proposed for construction on the south side of Baseline Road at approximately 35th Street. The building will sit just east of the Williams Village North residence hall on a site currently occupied by Parking Lot 630 and four tennis courts that are no longer in use. The building will provide more on-campus student housing to keep pace with recent enrollment growth, and also helps address growing demand from upperclassmen wishing to remain in campus housing.

July 12, 2018: During the month of June, contractors completed the entire sixth-floor concrete slab. They also started installation of student room windows, roof trusses and fluid-applied moisture barrier on the exterior sheathing. Work continues on installation of the structural wall panels on the seventh level, second-floor interior framing, mechanical, electrical and plumbing rough-in, exterior sheathing, and wood framing of upper-level exterior windows. The underground hot water and chilled water piping in Lot 622 is complete, and parking lot restoration is underway. Upcoming milestones include the concrete pour for the last elevated deck, as well as the start of brick installation.

June 5, 2018: During the month of May, the contractor completed the entire fourth-floor concrete slab. In the northeast corner of the building, this is the highest occupied floor. Work continues on installation of structural wall panels on the fourth level, first-floor interior framing, MEP (mechanical, electrical, plumbing) rough-in, exterior sheathing and wood framing of exterior windows. The eastern-most third of the underground hot water and chilled water installation was completed and this portion of Lot 622 was restored to campus permit holders. Upcoming milestones include starting window installation and the delivery of trusses in July, as well as the start of brick installation in August.

May 8, 2018: During the month of April, the contractor completed the stair and elevator core construction. The third-floor concrete slab was also completed, and the crews have moved up to start preparing for the fourth-floor concrete slab. Installation of hot and chilled water lines through Parking Lot 622 continued throughout April. Lot 622 will be completely restored before student move-in this August. Work activities that started this month include first-floor interior framing, MEP (mechanical, electrical, plumbing) rough-in, exterior sheathing and wood framing of exterior windows. The design team is wrapping up the design of the solar PV system, and these PV panels will produce 231,900 kWh per year, which is more than 15 percent of the building’s energy consumption.

April 9, 2018: March saw concrete stair and elevator core construction continue to make progress. The second-floor concrete slab was completed, as were the first-floor structural wall panels. Installation of hot and chilled water lines that will provide heating and cooling for the building began through the parking lot. Those lines will connect to the Williams Village Heating Plant. An existing bike shelter was relocated from within the Williams Village East jobsite to the south side of the Williams Village North residence hall so that it can be utilized by students. 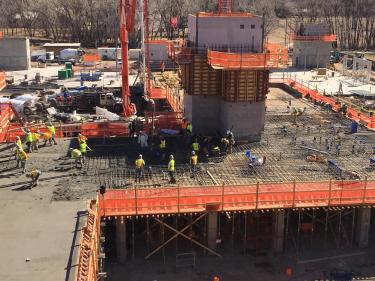 March 6, 2018: The second half of February and early March saw the first tube steel column and first prefabricated structural wall panel set in place within the southeast wing of the building. In the northeast section of the building, crews completed the final slab-on-grade concrete pour. In the western portion of the building, meanwhile, crews poured concrete for the first sector of second-floor transfer slab. Looking forward, upcoming milestones include completing the remainder of the second-floor transfer slab and the stair and elevator cores.

Inquiries about the Williams Village East project may be directed to conezone@colorado.edu.