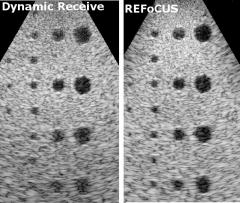 Synthetic aperture imaging coherently combines low-resolution images that represent unique spatial frequency information into a single high-resolution image. The most common model used is the virtual source - treating the focus of the array as a source of spherically diverging waves. The time of flight to each point to be reconstructed is timed relative to this point and the array location.

This model is restrictive, especially for focused beams where there is little to no overlap near the transmit focus. We introduce REFoCUS - Retrospective Encoding For Conventional Ultrasound Sequences - to recombine the backscattered wavefield to isolate individual transmit sources, effectively recovering the "complete data set". This idea enables other image improvements that take advantage of the synthesized transmit array contributions. 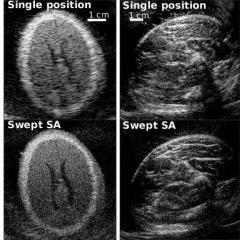 Fundamental diffraction physics says that a larger aperture improves both resolution and penetration. However, aperture size has historically been limited by system complexity and unknown benefit in the presence of acoustic clutter generated by the abdominal wall.

To investigate potential benefits of increasing aperture size, we use synthetic aperture imaging with precise motion tracking to physically sweep an ultrasound transducer, building data sets with even larger effective apertures. We are studying the benefits of using large apertures in vivo and using them to uncover sources of image degradation. The data recorded using this technique can produce matched images over a range of image optimizations applied in post-processing, providing unique insight into image quality. These results are extended using large nonlinear computational simulations. 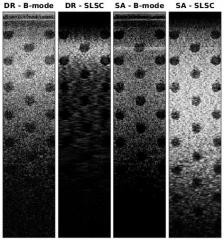 Conventional B-mode images are formed by summing the focused backscattered echoes received on all channels of an ultrasound array. However, this summation includes clutter signals formed by aberration, reverberation and off-axis scatting that obscure imaging targets. These signals can be differentiated from tissue by their spatial coherence - similarity as a function of receiver separation, or lag. Short-lag spatial coherence (SLSC) imaging leverages this information by forming an image from the integration of the coherence function over the short-lag region at all axial and lateral locations. The SLSC image demonstrates reduced clutter and improved detectability of hypoechoic and anechoic targets.

We are working to better understand the nature of these sources of clutter and how to modify our imaging techniques to optimize image quality in difficult imaging environments. Noise, apodization and focusing all play important roles in the measured signal coherence and therefore in the SLSC image. Acoustic reciprocity and synthetic aperture techniques allow for novel coherence imaging acquisition sequences. 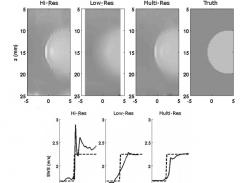 Ultrasound can be used to not only image the acoustic impedance properties of tissue, but also to interrogate the stiffness. Using acoustic radiation force to induce a transient displacement over a narrow region, a mechanical wave propagating in the transverse direction can be created. Displacement estimation techniques can be used to measure the resulting shear wave and calculate the propagation speed of the wave, directly related to tissue stiffness.

We are developing methods to improve the robustness of shear wave speed estimates using linear estimation techniques. Redundant data sets allow a reduction in the variance of estimates and are compatible with regularization techniques to further improve estimate quality.