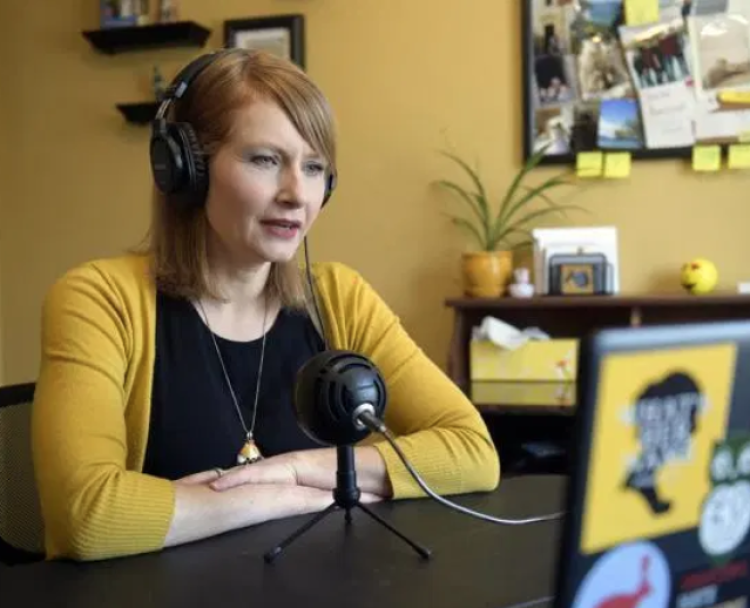 The alumni of our three graduate programs exhibit success in a multitude of ways once they leave the University of Colorado Boulder, personally and professionally. They enter diverse and unique career paths that do not always revolve around academia, even extending the skills they learned in the English Department to fields that are not always traditionally synonymous with an English degree. A prime example of this can be seen with Olivia Meikle, a 2017 graduate from the MA in Literature program. She not only teaches at Naropa University and the University of Denver, but also produces and hosts the widely acclaimed What’sHerName podcast alongside her sister, Katie Nelson.

What’sHerName podcast, downloaded over 180,000 times since its debut episode in 2018, came to fruition after Olivia began to talk seriously with her sister, a history professor, about collaborating on a women’s history podcast. In addition to her MA in Literature, Olivia also holds a certificate in Women’s and Gender Studies from CU Boulder, so this project seemed like a perfect synthesis of each of their interests. The project really began to take focus when Olivia was walking through Columbia Cemetery on the Hill and stumbled upon a grave that was inscribed simply “Mother.” “In that moment, I suddenly knew we had to pursue Katie’s earlier suggestion that we focus on the forgotten women whose stories have been erased from our narratives.”

After the idea took shape, the sisters both knew they would have to spend time learning the mechanics of producing a podcast. “All that was left was the little stuff like learning audio engineering, choosing subjects, coming up with a format, finding guests, creating a website… no big deal! We spent about six months planning, learning and preparing a few episodes to make sure we were ready to launch with a solid and professional-sounding project, and we premiered our first two episodes on New Year’s Day, 2018.”

Olivia is not shy about admitting that her studies in English were one of many factors that prepared her to take on such a large creative project alongside her sister. “I could (and have in a talk for the English Department in 2019) go on about this for hours, but I firmly believe that an English degree is the most helpful, versatile, useful degree you can get for learning how to think, how to write (including all forms of “writing,” such as podcasting, filmmaking, teaching, storytelling, etc.), and how to learn. The knowledge I gained during my degree is critical for my success in both sides of my career, as an instructor and as a podcaster, but even more important has been the skills in critical thinking, narrative-building, rhetoric, persuasion, analysis and research that has allowed me to be confident enough to push myself outside of my own fields and work successfully in a new discipline, in a very public forum with no margin for error, without making a fool of myself or doing a disservice to our listeners.”

When asked about the ways in which she was prepared for success in the realm of podcasting, Olivia dictated some of her success to CU Boulder’s English Department, specifically. “Thora Brylowe’s phenomenal ProSem class was an excellent preparation for the academic side of my work, but has proved equally useful for the podcasting side as well – knowing how to locate and contact guests, how to promote ourselves and our work, how to adapt our content for a variety of audiences, and how to keep a practical view of the financial and workload aspects of the work while knowing how to choose when to stick to our guns on our goals or principles for this “community education” project, plays into the success of the podcast in almost every way I can think of.”

Two years later, What’sHerName is averaging over 16,000 downloads a month, and has listeners in over 120 countries. The podcast is being used all over the world in college and high school classrooms, has been featured in newspapers, popular blogs, and even on Melinda Gates’ new website Evoke.org.

Olivia was kind enough to offer advice to any English major or minor that may be questioning their path or their career goals: “Plan for the career goals you think you’d like to achieve, but always keep your eyes open for the “shiny thing” (to quote Tim Minchin) that’s approaching out of the corner of your eye. You might end up in a completely different career path or medium than you had expected and find it’s exactly what you would have wanted if you’d known it had existed, if you’re just willing to “catch the wave” as it comes!”