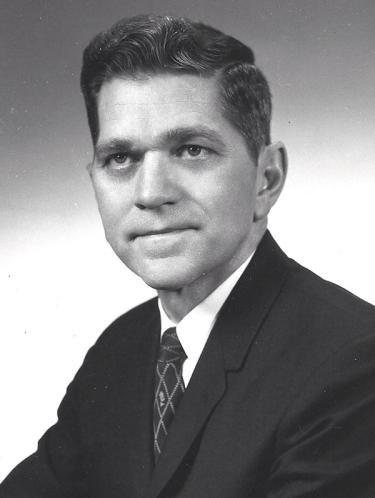 Somewhere in a packed schedule he still finds time not only to teach regular classes and supervise graduate research each semester, but also to write textbooks and to serve as chairman of such groups as the President's Committee on the National Medal of Science and the Colorado Environmental Commission.

Peters began research on the control of air pollution in 1954, when he was one of few outside the Los Angeles area who understood the implications of the problem. His many publications in the field have brought him international recognition, and he has spoken throughout the nation to influential groups. He was chosen by the Governor of Colorado in 1970 to head the Colorado Environmental Commission, which brought in a preliminary report recommending strong measures which are likely to have a national effect.

He has been equally unflinching in efforts for the College of Engineering. Not long after he came to the college as dean, the priority for the proposed engineering center moved upward from 11th to first, and his efforts were instrumental in obtaining $1,325,000 from the National Science Foundation and $7,200,000 from the State of Colorado to build the structure.

There then began a rise in graduate enrollment, research activities, professional publishing, and faculty qualifications which have put the college today "upon the threshold of national prominence," according to one recent official evaluation of engineering education.

Born in Delaware, Ohio, Peters graduated in 1942 from Pennsylvania State University, where he was ski team captain and track letterman, and served as supervisor in charge of a nitric acid production unit of the Hercules Powder Company. In 1944 he became an Army ski trooper, serving as first sergeant in the 10th Mountain Division and emerging from the bitter fighting of the Italian campaign with the Bronze Star, Silver Star, and Purple Heart. He returned to Penn State to earn an M.S. in chemical engineering, and four years later was back again, earning his Ph.D. in 1951. He joined the faculty of the University of Illinois, became head of the Division of Chemical Engineering in 1958, and left to become dean of engineering at the University of Colorado in 1962.

Among a great many professional activities, he has served as president of the American Institute of Chemical Engineers and as a member of the National Air Pollution Control Administration Air Pollution Training Committee. Peters was the first resident of the Rocky Mountain states honored by election to the National Academy of Engineering, and has received the George Westinghouse Award and the Award of Merit of the American Association of Cost Engineers.

Even with the financial and other harrassments of an engineering dean today, he still finds time for skiing, ice skating, and regular workouts at track. With Dr. Klaus Timmerhaus, associate dean, Dean Peters recently turned in a good track record at the National Chemical Engineering Faculty Four-Man Relay (postal) Races, with each man competing twice-once as professor and once as dean.