As news of Hurricane Maria reached the mainland, doctoral students Astrid Sambolín Morales and Molly Hamm-Rodríguez were in Colorado, but their hearts were with Puerto Rico. Sambolín Morales, a Puerto Rican, and Hamm-Rodríguez, who has lived and worked in the Caribbean, were focused on the well-being of family, friends and those displaced. As reports flowed in about the hurricane’s devastating effects and subsequent political bungling, the duo earned a competitive “quick-response” grant from the Natural Hazards Center to conduct timely research on the effects of displacement of Puerto Rican students.

What happens when a disaster forces students to leave home?

Do schools serve as spaces of refuge, or do they inadvertently deepen trauma? Our education system can no longer ignore these questions.

As natural disasters grow in frequency and intensity, more communities will be displaced in a process that ultimately reveals social inequalities. Puerto Rico’s case is no exception. In 2017, Hurricane María wreaked havoc on the island, already suffering from high unemployment and poverty due in large part to its colonial status. We join other scholars in arguing that Hurricane María was an “unnatural disaster” whose devastation was compounded by colonialism. Even though Puerto Ricans are U.S. citizens, the arrival of nearly 160,000 PuertoRicans to the mainland U.S.—including thousands of K–12 students—has revealed the limits of citizenship in the wake of disaster.

As Puerto Rican youth began enrolling in mainland U.S. schools to avoid disruptions to their education, we studied the effects displacement had on students arriving to Central Florida. While programs were put in place to assist students and families, participants repeatedly shared unfulfilled promises. For example, families who arrived on humanitarian flights and were given hotel vouchers endured significant stress as the government threatened to terminate the program with little notice.

Teachers said many students “came with the hurricane effect,” traumatized and wanting to go home. The abrupt disruption to students’ lives was painful, but the inequitable relocation and recovery made things worse. Puerto Rico did not receive timely aid from the U.S. government, and receiving communities lacked much-needed financial support to serve a displaced population. 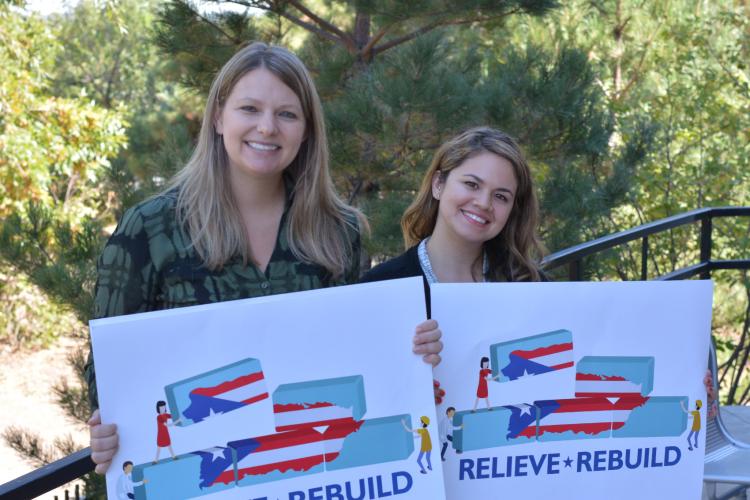 Molly Hamm-Rodriguez, left, and Astrid Sambolin Morales organized One Year After Hurricane Maria, an event commemorating the hurricane's anniversary and exploring the role of education and activism in the disaster's aftermath.

Although many would focus on Puerto Ricans’ U.S. citizenship and the perceived advantages it provides, less attention has been paid to the second-class nature and limitations of that citizenship. Puerto Rico received less federal aid than states recently affected by hurricanes, and more than half of aid applications were rejected, according to the Federal Emergency Management Agency data analyzed by the publication El Nuevo Día. Even so, Puerto Ricans were often framed as foreigners undeserving of what little resources were available. The message is clearmCitizenship confers neither rights nor a sense of belonging, and this greatly affected the educational experiences of newly arrived students.

Although most students were primarily Spanish speaking, they found themselves in a new school system that denied full access to learning in their home language. While individual schools provided language supports, the pressure of taking standardized tests in English was particularly difficult for teachers and students. Though the district advocated to the state Department of Education that students be allowed to take the tests in their home language—as encouraged by the federal Every Student Succeeds Act—the district’s efforts were unsuccessful. Florida’s current plan under the act does not provide the option to test in languages other than English, though activists continue to fight for this right.

Our study finds there are indeed limits to citizenship and true inclusivity, which affects recovery efforts and supports for displaced families and culturally and linguistically diverse students. We must resist imagining citizenship as a document that automatically and equally confers rights, and instead question the ways in which some racialized subjects are systematically excluded from accessing those rights regardless of documentation status.

The original version of this piece was published in The Assembly, the new journal on public scholarship initiated and run by School of Education graduate students. Learn more at colorado.edu/journal/assembly.