From student to custodian to principal, alumnus uses experience to transform local schools

It feels good to be home, says Michael Atkins with his contagious smile, as the proud new principal of Denver’s Stedman Elementary, a dual language school.

“I wanted to go back into the community and give back,” he said. “Even though the neighborhood looks a little different, it’s still my community. I can keep some historical presence within this building.”

Atkins (MEdu‘15) grew up just a few blocks from the diverse, longstanding school in east Denver’s Park Hill neighborhood, but he did not attend the school. Park Hill has a storied past as the epicenter of efforts to desegregate Denver schools brought forth by local African American and Latino parents in the 1970s. The resulting busing legislation was among the first in the country outside Southern states, and the policy altered educational experiences for students like Atkins well into the ’90s. 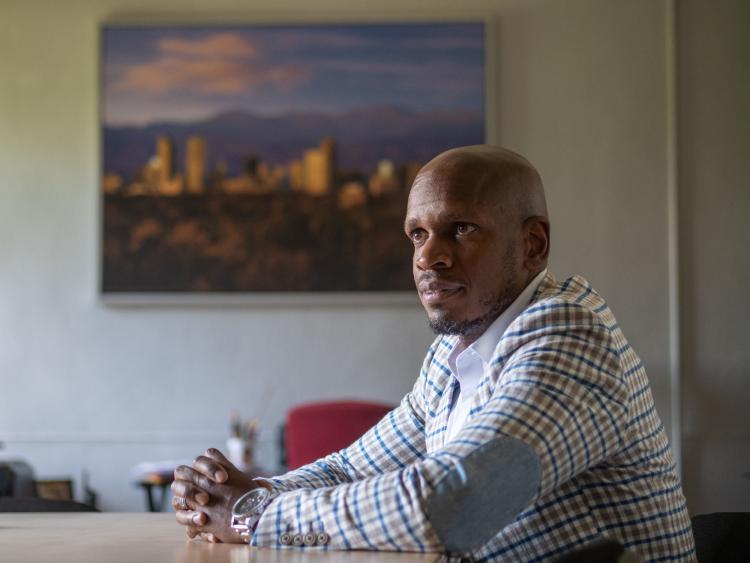 Atkins was bused to different schools during a challenging time for neighborhoods like Park Hill. He remembers Denver’s “summer of violence” in 1993, when local kids were victims of violence, and gang activity regularly made the local and national news.

Busing led to enhanced opportunities but ultimately disparate experiences for Atkins. Despite being bused in the name of integration, his middle school seemed to be separated into wings for African American and Latino students, while the wing for advanced classes served mostly white students. He felt unsupported, and he rebelled.

It sent me into a space of not seeing myself in classrooms, not thinking that education was built for me,” he said.

By high school, opportunities emerged from a new climate and reputation seeded by his gregarious older brother. Atkins was able to engage in school again, and from there he pursued a bachelor’s degree and became the first in his family to graduate from college.

Armed with a degree and a desire to work with youth, Atkins set his sights on positions in education. He had worked with children in his mother’s daycare, and he was eager to meet the demands of being a new father. When he returned to local schools to apply for paraprofessional openings, he was pointed toward custodial roles, so that’s where he landed.

Years later, Atkins transferred to a new school, where he was greeted by a familiar face—his former second-grade teacher-turned-principal. She warmly remembered Atkins and his family and listened to his story. Weeks later, she offered him a reading and writing specialist position, finally a paraprofessional role. It changed everything for Atkins.

“It still makes me emotional to this day, because I don’t think,” he paused, “I know that my route would have been completely different in education and in life without that intervention.”

Later as an elementary teacher, another new opportunity arose—to earn a master’s degree through the CU Boulder School of Education and the BUENO Center for Multicultural Education.

“I heard my grandmother's voice saying, ‘Education is the key to unlock all doors,’ and I knew I needed to jump,” the longtime CU Buffs fan said.

Atkins had been involved with the BUENO Center’s professional development programs, and he incorporates the program’s bilingual and biliteracy principles into his curriculum and keeps in touch with his graduate school classmates to this day.

Atkins’ experiences continue to inform his work in education today, and the alumnus shares his story with his school’s families, students, teachers and staff, including his all-important custodial team. That openness was not always his norm.

I wouldn’t tell my story with my chest out, because I was afraid of what people might think,” he said. “When I shifted that practice, my life changed, because I truly understood the power of vulnerability.”

Modeling vulnerability is one of the many ways Atkins aims to enhance learning opportunities at Stedman, and he believes in fixing systems locally to then change policies broadly.

“When I reflect on own experiences, I am always looking at it from the perspective of ‘that happened to me, so how can I make sure it doesn’t happen in the future?’”