In support of our trans community

As a community of educators, researchers, staff and students, we affirm our support and love for our transgender and gender nonbinary students, friends, colleagues, and family members.

We want to state this as clearly and simply as possible: the broad scientific consensus is that gender is not binary. We live in a world with transgender people, and we always have. Governments and others assign a legal sex category at birth, usually based on anatomical characteristics; but this does not change the reality of a spectrum of gender identities. There is simply no other conclusion about the nature of sex and gender that is morally or scientifically valid.

Spreading misinformation about transgender and gender nonbinary people is harmful, and silence on this matter isirresponsible. We must not tacitly condone lies. Accordingly, we use this moment to strongly, explicitly, and publicly stand with transgender and gender nonbinary people. In doing so, we note that there is no justification for questioning the word of trans people about their own identities. We also rely on scientific and ethical truths to combat abhorrent attempts at their erasure, and we uphold their inalienable human dignity and rights to equal protection under the law. We are a community of more than just research and words. Today we reaffirm our commitment to the work of creating a more inclusive community for members of the transgender and gender nonbinary community. We see you. We recognize you. We support you.

As we stand with transgender and gender non-binary people in fighting hate and erasure in our schools, universities and society, we support research, service, and practice in our own school and throughout the K-12 and higher education systems. We will continue to work with transgender and gender nonbinary students and colleagues in ensuring that they feel welcome and supported in the community. This includes providing safer physical facilities and affirming learning environments. This also involves deep reflection and active allyship from our cisgender colleagues and community members.

Our School of Education at the University of Colorado has stood alongside our transgender and gender nonbinary students and colleagues more intentionally over the past several years. Our colleagues at A Queer Endeavor, a center located in our school, have worked with thousands of educators and school and district leaders in our local area, as well as across the country. In addition, they have worked closely with our teacher education faculty and staff, as well as with colleagues across our school, to infuse understandings of gender identity into each of our courses. At the same time, moments like the one we are in now remind us of just how much work we still have to do in our school and across our country.

At a time when many of us feel hopeless and dispirited in the face of hatred and misunderstanding, it is critical that we take action together.

Here are a few ways that you can join us in fighting against trans erasure by increasing support and visibility of trans people in particular.

A collective statement and resources from A Queer Endeavor, the National Education Policy Center, CU Engage, and the faculty and staff of the CU Boulder School of Education. 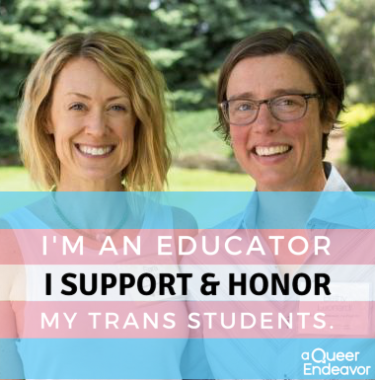 In a climate where protections for trans, non-binary, and gender-nonconforming people are under attack, educators can serve as lighthouses for these students and families, and many are rising up to meet that demand. A Queer Endeavor calls on all educators, at all levels, to make your advocate/ally/accomplice status visible. Become lighthouses for your students.