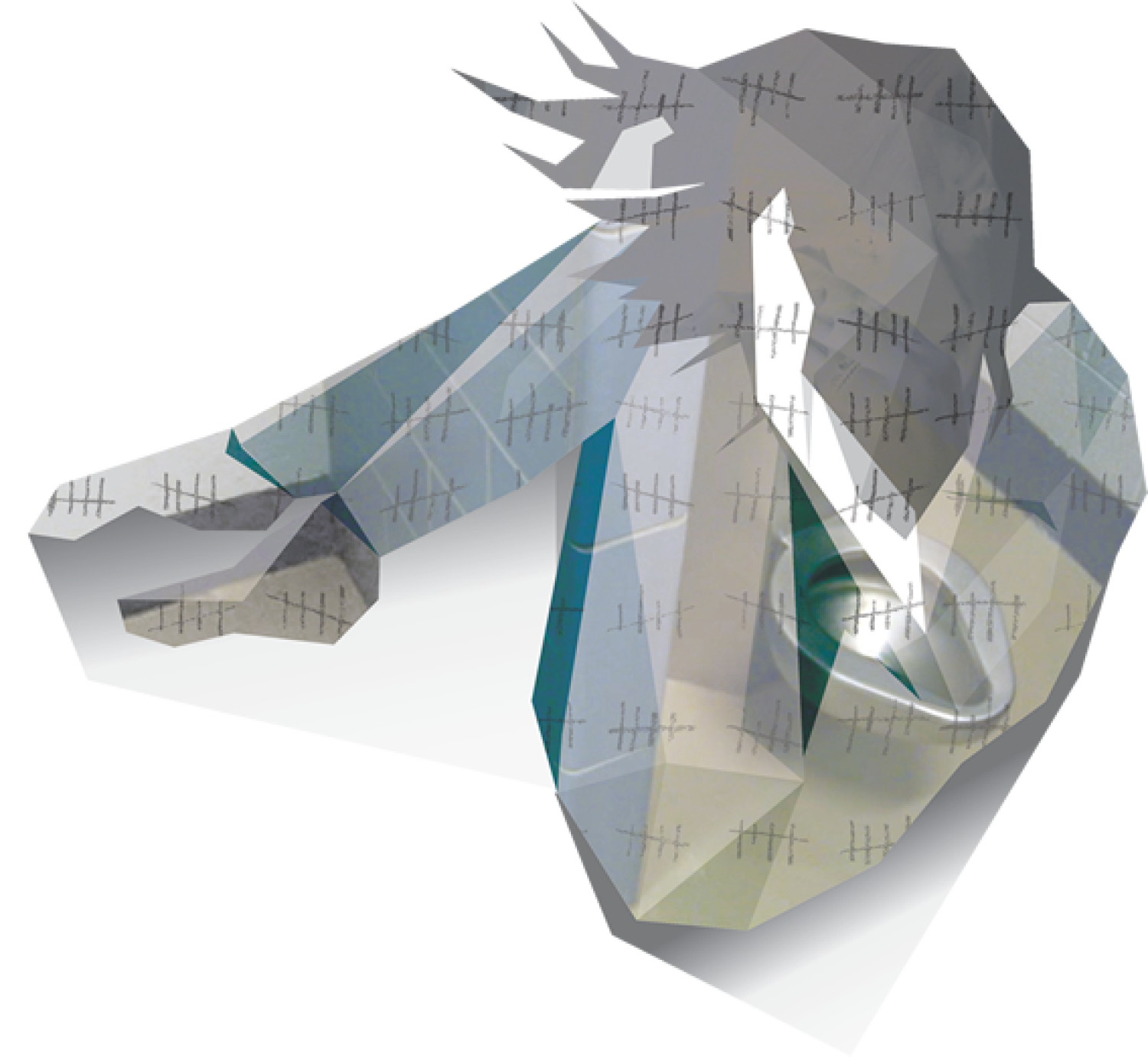 In 2015, 24-year-old Jamycheal Mitchell—who had schizophrenia and bipolar disorder—stole a Zebra cake and Mountain Dew from a convenience store in Norfolk, Virginia. Police arrested him on April 22, 2015, and about four months later, on August 19, he was found dead in his jail cell.

The case brought up a lot of questions for reporter Gary Harki, who covered it for The Virginian-Pilot and won the 2018 Al Nakkula Award for Police Reporting, co-sponsored by CMCI’s Department of Journalism and the Denver Press Club.

As he learned more about Mitchell’s case, Harki was left with as many questions as answers.

“Why was this guy in jail for so long? He wouldn’t have gotten that much time had he been tried and convicted,” he wondered. “It was that small of a case, but he was caught in this criminal justice system that is not prepared to handle people that have his type of illness.”

Harki decided to look for similar cases, both locally and nationally. To his surprise, he found dozens of other cases throughout the country that were just as troubling. His attempt to build a more comprehensive investigation revealed another issue: No agencies or individuals collected the information necessary to document the extent of the problem.

After some urging by his editor, Harki applied for, and was awarded, the O’Brien Fellowship in Public Service Journalism at Marquette University. The opportunity allowed him to spend the 2017–18 school year working with Marquette students to further his study. With Harki’s guidance, the team built a database to track 404 deaths of people with mental illness in jails across the country since 2010. According to their reporting, at least 11% of people with mental illnesses who died in jails had family or friends who warned the jails about their condition.

Based on these findings, Harki published “Jailed in Crisis,” a series illuminating the deaths of mentally ill people in jails throughout the country—often under horrific and preventable circumstances. His reporting led to a U.S. Justice Department investigation into how the Virginia jail was treating inmates, especially those with mental illness.

“Harki’s reporting discovered highly disturbing trends,” says CU News Corps Director Chuck Plunkett, who oversaw the 2018 Nakkula award selection process and discussed the investigative series with Harki and Rebecca Carballo, a Charleston Gazette-Mail reporter who helped build the database while she was a Marquette student. “Too often, those being held against their will for lack of appropriate beds in clinical settings are subjected to inhuman treatment.”

Plunkett: We’ve seen horror stories for decades about problems that result when people suffering from mental illness are housed in jails, when what they need is treatment at a mental health facility. Why has it been so hard to find useful data about what happens when those jail stays go wrong?

Harki: I think a lot of it comes down to the fact that nobody collects the data. The federal government doesn’t track it, and the states don’t really track it. The Bureau of Justice Statistics tracks things through a death-in-custody report, but they have never really tried to track what somebody’s medical history was, which mental illness would be a part of.

I think it’s frustrating to a certain degree to sheriffs, too, but it’s also part of a larger problem of criminal justice data in general, which is that there’s all these questions out there—police shootings, different things with jails and prisons and isolation—and none of it is tracked very well. Part of it is there’s just not a lot of will from jailers or communities to track the data because then you might have to deal with a problem.

Plunkett: That might be the better way to fine-tune it. Is there some kind of institutional bias in these entities that’s just too embarrassing or too much trouble or too many potential pitfalls?

Harki: I think a lot of it comes down to, one, it is work to try and track this stuff, and two, a lot of the time the data that gets collected is with the federal government, where you’ve got a carrot and a stick. It’s like, ‘We might withhold funding from you if you don’t provide us with information.’ That’s how the uniform crime report data gets collected. That’s never been the case with this jail data, and it’s also a lot more decentralized.

Carballo: No one really seems to have the data looking at why people are dying in jails. A lot of states had it where they tracked jail deaths, and they tracked how many mentally ill people were in jail, but they didn’t track how many mentally ill people died in jail. And some of the states had data where they could have figured it out, but their open record laws would say, ‘Well, that would require us to create a record and we don’t have to create a record for you,’ so they don’t give you the data. So some states actually do have the capability to figure it out, but that’s time, effort and money.

Plunkett: This was quite an ambitious project. I’d like to hear your thoughts on a state newspaper uncovering social injustices across the country.

Harki: It was a tricky thing to do a national story at a local paper, but I had written about this issue since 2015. It just seemed like, look, here it is and it’s a national story. We need to write it because it’s not just happening here in Norfolk, Virginia. It’s happening all over the country.

Once I got the O’Brien Fellowship for Public Service Journalism from Marquette, the question was, ‘What do we do with this issue? How do we go at this again?’ It was almost like a movie or something. We just needed to pull the camera back and look at it through a broader lens. My editors were thankfully on board from the beginning, saying, ‘Let’s create the database and let’s do the story. We think we have the knowledge to do it and the right location to do it because of Mitchell.’ And that’s what happened.

Plunkett: Let’s talk about the role that data journalism played in your work. How should newsrooms think about equipping their journalists with these skills? Not every beat accommodates the time and resources for this kind of work, but what’s the right mix?

Harki: On some level, I think everybody should have a basic level of data journalism or a basic knowledge of it. It’s just going to help you as a journalist. You’re going to know a little bit more than other people about how to handle some of this stuff because everyone comes into contact with data.

I feel like in terms of skill sets in data, I’m not that advanced. But I can look at something and know what the data is, and know that we need to work with it, and know what’s out there or find it ourselves to be able to do stories like this—to be able to look at it and say, ‘OK, what is the best we can do? What is the best information we can have so that we can speak about this on some authority?’

It is easy to dismiss things sometimes because it’s one story—it’s anecdotal evidence. Being able to put a number on it and say there are patterns to it and there’s a reason behind those patterns, that’s a really important thing to be able to do as a journalist and at the heart of why I believe in data journalism.

Plunkett: Your reporting highlights comments from jailers and sheriffs who argue that more resources should be invested in mental health treatment facilities, even if it means pulling funds from traditional policing budgets. What research needs to be done to help policymakers bring this kind of reform?

Harki: It gets really complicated. This is such a localized issue because of the way mental health systems are decentralized in the United States and because jails are decentralized. In a lot of places there’s not a lot of oversight over county jails, including Virginia. What really needs to happen—almost on a municipal level, not even a state level—is sort of a cost-benefit analysis and people saying, ‘Hey look, if we put more money into treatment, then you’re not going to have as many people getting into jails and into the criminal justice system, and that’s going to save money in terms of court costs, lawyers, housing.’

Harki: If you look at places like Miami or Tucson, they’ve done that analysis over time, and they’ve recognized that not only is this better for us as a society because we’re keeping people out of jail and keeping people from suffering in these places because we don’t have the ability to treat them there, but we’re also likely saving money and resources by doing it this way. It’s just easier on everybody for both moral and monetary reasons.

Each spring since 1991, the Department of Journalism at the College of Media, Communication and Information and the Denver Press Club have honored the late Al Nakkula, a 46-year veteran of the Rocky Mountain News whose tenacity made him a legendary police reporter. Nakkula died in 1990.

The award is for work produced by a reporter or reporting team in print and/or online platforms in the United States the previous year.

The first-place prize is $2,000, and the winner is invited to speak to classes and accept the award at the annual Denver Press Club’s Damon Runyon dinner.

View a full listing of past winners and entry guidelines.