Life after death on the Internet 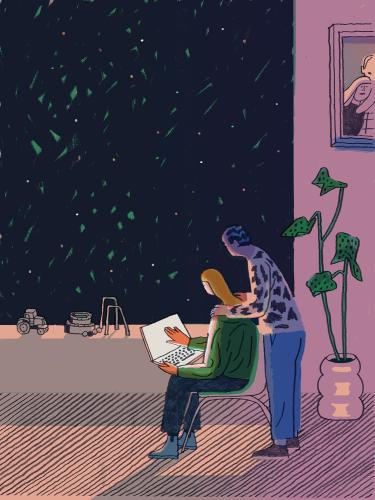 Illustration by Josh Cochran for the Coloradan.

As our lives go digital, Jed Brubaker is studying what happens to all that data after we die.

If Jed Brubaker were to die tomorrow, his husband, Steven, would become the steward of his Facebook page.

His profile picture would remain as it is today, a neat headshot of the 36-year-old assistant professor sporting a goatee, pale blue glasses and a slightly mischievous smile. His cover image might be switched to the lake in Utah where he’d like to have his ashes spread. Above that picture would be a single word, “Remembering,” carefully chosen to alert visitors that he was gone but, in this sacred online space, not forgotten.

Brubaker has painstakingly thought through this scenario, not because he is obsessed with death or Facebook, but because it’s his job to think about it.

As one of the few scholars in the nation to study what happens to our data — including our social media presence — after we die, he’s been instrumental in developing Facebook’s Legacy Contact, the feature that enables users to determine the postmortem fate of their profile. Now, as a founding faculty member in CU Boulder’s new Information Science department, he’s working to further improve the ways people experience death online, via new algorithms, apps and features designed to sensitively acknowledge a fact tech companies have tended to ignore: People die.

“I just hope that as a result of my work, death is a little bit kinder to people.”

Read more at the Coloradan