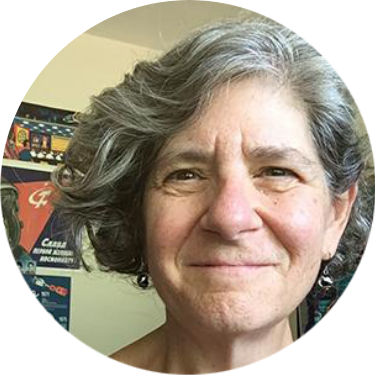 Roshanna P. Sylvester is Associate Professor of Critical Media Practices and Digital Humanities. Her appointment is split between the Department of Critical Media Practices in CMCI and the Herbst Program for Engineering, Ethics and Society in the College of Engineering and Applied Science. Originally trained in Russian history (PhD Yale University), Sylvester specializes in the histories of gender, technology and culture and the history of childhood in the early space age.

Her first book, Tales of Old Odessa: Crime and Civility in a City of Thieves, explored identity creation and expression in the pre-revolutionary city through analysis of crime reporting in the popular press. Sylvester’s current project, Dreams in Orbit: Girls and Space-Age Cultures in Cold War America and the Soviet Union focuses on letters from Soviet and American young people to the pioneering spacefarers Yuri Gagarin, John Glenn, and Valentina Tereshkova. External funding for the project has been provided by the Spencer Foundation, the American Philosophical Society and the Kennan Institute.

Sylvester has published research articles in Slavic Review, Russian Review, Journal of the History of Sexuality, Journal of Urban History, Jahrbücher für Geschichte Osteuropas and several edited volumes on Soviet space history and culture. Her work has been featured in The Conversation, Smithsonian Magazine, AP News, the Los Angeles Review of Books, the Russian History blog and others. She has also presented at CU Boulder’s Fiske Planetarium and the Manfred Olsen Planetarium (at the University of Wisconsin-Milwaukee).

Before coming to CU, Sylvester was Associate Professor of History and member of the Distinguished Honors Faculty at DePaul University in Chicago. Recipient of the Thomas and Carol Dammrich Faculty Innovation Award, Sylvester served as Director of  StudioCHI, DePaul’s digital humanities center and was a member of the Chicago Colloquium on Digital Humanities and Computer Science steering committee. She was also a visiting fellow at the Clinton Institute of American Studies at University College Dublin.

"You Are Our Pride and Our Glory!" Emotions, Generation, and the Legacy of Revolution in Women's Letters to Valentina Tereshkova

Scandal at the Severnaia; or, Sex and the "New Man" in Late Imperial Odessa

Let's Find Out Where the Cosmonaut School Is: Soviet Girls and Cosmic Enthusiasm in the Aftermath of Tereshkova

She Orbits Over the Sex Barrier: Soviet Girls and the Tereshkova Moment

Making an Appearance: Urban “Types” and the Creation of Respectability in Odessa's Popular Press, 1912-1914

Crime, Masquerade and Anxiety: The Public Creation of Middle-Class Identity in Pre-Revolutionary Odessa