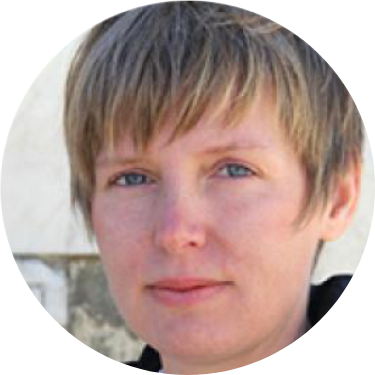 Professor Teri Rueb’s practice unfolds in the extended fields of sound, mobile media art and land-based critical spatial practices. She has created GPS-based interactive sound installations since 1996 and has received awards including a Prix Ars Electronica Award and nominations for the CalArts Alpert Award, the Rockefeller New Media Award and the Boston ICA Foster Prize.  Her work has been supported by the Ucross Foundation, the Arnold Arboretum / Harvard University, the Isabella Stewart Gardner Museum, the Santa Fe Art Institute, La Panacée, Edith Rüss Site for New Media, The Banff Center for the Arts, the Boston Institute of Contemporary Art, Artslink, Turbulence.org, and various State Arts Councils. She lectures and presents widely at venues including Ars Electronica, ISEA, SIGGRAPH, Transmediale and IRCAM.

Her writings have been published by MIT Press, Routledge, and University of Minnesota.  Writings about her work have appeared widely and most notably in anthologies and survey texts such as “Digital Art” (Thames and Hudson, World of Art Series), “Walking and Mapping” (MIT Press), “Information Arts” (MIT Press), “Ubiquitous Computing: Complexity and Culture” (Routledge) and “Mobile Audience” (Springer).

She has played key roles in developing new programs, curricula and doctoral degrees at the Rhode Island School of Design and the University at Buffalo, among others.  She has also worked as a designer and art director for various publishers including Newsweek, Time, and Conde Nast and has served in a curatorial capacity for museums and public art programs in the San Francisco Bay area.

She holds a doctorate from Harvard University, a master’s degree from New York University, Tisch School of the Arts, Interactive Telecommunications Program and a bachelor’s degree in Art and Literary and Cultural Studies (honors) from Carnegie Mellon University.