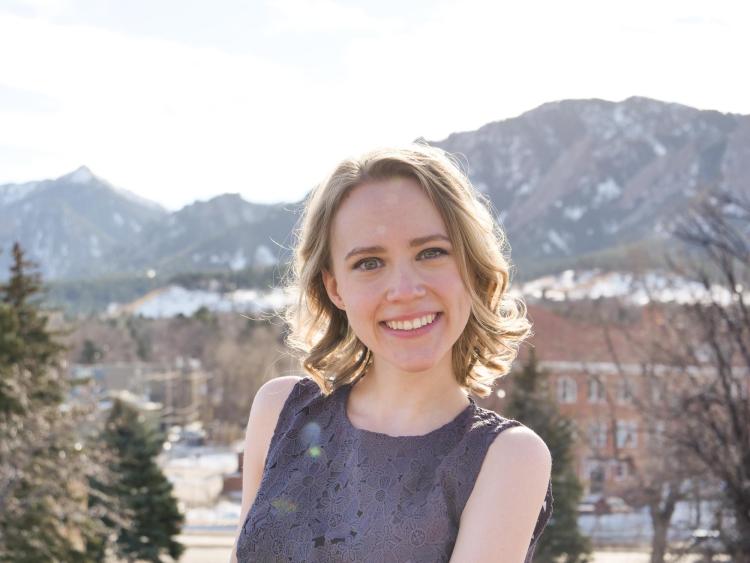 Rylee Vogel is a performer with a love for musical theater. She also loves communication and how it connects people. Now, these two degrees will help her make her way in show business.

This December, Vogel will graduate with a degree in communication, a minor in theater and the distinction of earning the William W. White Outstanding Graduate Award. This honor is bestowed to the student graduating with the highest GPA in the College of Media, Communication and Information. After years of hard work—sometimes even holding multiple jobs at once—Vogel is graduating with a 3.96 GPA and plans to move to New York City.

“CMCI has really taught me how to have [personal] conversations in the real world and how to walk into an audition or a job interview and be confident and know how to communicate with people well,” she said. “It makes you stand out when you are walking into that room.”

Vogel was initially attracted to communication because she had an interest in law as it seemed a good combination. But she soon realized that wasn’t a path she wanted to pursue. Instead, she enrolled as a double major in communication and musical theater.

Then the COVID-19 pandemic abruptly interrupted her freshman year. Suddenly, she and her peers were sent home, zooming into class, trying to connect over the screen. Not long after, her two majors began conflicting, and it became apparent that keeping the dual degree would tack on more time in school.

“I realized I could start working [in the theater] instead of spending an extra year,” she said.

After a meeting with her counselor and determining that she could get her theatrical training outside the classroom, she decided to keep her major in communication and change her theater studies from a major to a minor.

Vogel maintained her full course load while auditioning for plays in the area. She also landed a job at the Candlelight dinner theater, sometimes working up to 40 to 60 hours per week.

“I found, even though it wasn’t school-related, my comm professors were very, very helpful in making sure that my career was able to get started outside of class,” she said.

She chose communication, in part, because of its practicality: In addition to performing, she’ll be able to do media marketing or public relations, especially for theater companies. The combination will help her performance career be more sustainable, she said.

“CMCI has really taught me how to have [personal] conversations in the real world and how to walk into an audition or a job interview and be confident and know how to communicate with people well. . . . It makes you stand out when you are walking into that room.”

Along the way, she’s found unexpected moments of joy from studying the topic. Although she never took a formal family communication course, she found elements of communication theory in her other classes that offered new insights into family dynamics.

“I’m very family oriented,” Vogel said. “Anything that dealt with family communication, I always found really, really fascinating—the way that families communicate with each other, how different families are built and what the effects of that are.”

Beyond that, Vogel found her studies in communication actually help her be a better performer. She connects with the audience, director, castmates and even the characters she plays at a deeper level, all because of the lessons she’s learned about communication styles.

“You can find different motivations for each character through connection and communication, and then on the personal side of it, you’re able to connect with directors and castmates to understand what their point of view is,” she said. “For instance, intimacy is an interesting thing on stage. Understanding how the other person is feeling, what their process is as an actor, and having these conversations is super important. It's communication that’s able to actualize that.”

For her, it’s an honor to be recognized by the college that has given her so much support.

“Throughout my time here, time and time again, CMCI is supporting their students in ways that are not traditional, and I appreciate that so much,” Vogel said.

Celebrating the Class of 2022