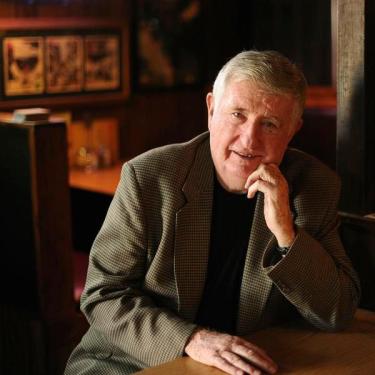 Walter “Dusty” Saunders, a much-celebrated sports and entertainment critic in Colorado, died Sunday, May 29, at the age of 90.

Born Sept. 24, 1931, and raised in the Denver metro area, Saunders began his newspaper career as a copy boy for The Rocky Mountain News in 1953. Saunders worked as a reporter and editor until the paper’s closure in 2009, a 54-year stint during which he became the most-decorated columnist in the paper’s history. After the closure, Saunders continued his work in a weekly sports column for The Denver Post.

"Dusty truly was a Colorado journalism icon—a ‘must read’ in his day, when Colorado newspapers were at their peak,” said Neill Woelk, a current sports reporter for CU Boulder athletics.

As a young adult, Saunders launched a basketball career at Holy Family High School, Fort Lewis College and Colorado Mesa College. He transferred to the University of Colorado Boulder and completed his undergraduate degree in journalism in 1953. Saunders was later honored with the school’s Outstanding Alumni Award.

Saunders’ career extended beyond the Colorado newsroom. He was a founding member and past president of Television Critics Association, a national organization made up of critics and columnists from major newspapers and magazines in the U.S. and Canada.

Additionally, as the Denver Press Club’s president in the 1970s, he abolished the rule that forbade women to join. Today, hundreds of women journalists are members and serve on the board of directors, The Denver Post reported.

In 1993, Saunders was named the Colorado Journalist of the Year by the Society of Professional Journalists, and in 2011, he published an autobiography, Heeere’s Dusty: Life in the TV & Newspaper World.

His son, Patrick Saunders (MJour’87), followed in his father’s footsteps as a current Rockies reporter for The Denver Post.

"What a long, incredible life,” Patrick wrote on Twitter. “We will miss him dearly, even as we celebrate his life.”