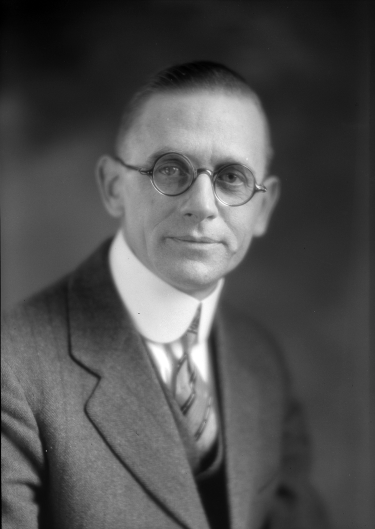 Crosman learned to set type and run newspaper presses at 14 years old. It was the beginning of an illustrious career during which Crosman served as the first head of CU’s journalism department, the first head of the university’s College of Journalism, a renowned speaker in the field of journalism education, and the leader of national journalism organizations.

“Professor Crosman was always interested in what we [students] were doing,” wrote the editors of The Colorado Transcript on May 6, 1948, just days after Crosman’s death. “He was proud of his students and his graduates, and he had a right to be since many of his students have gone right to the top.”

Crosman was born in Dexter, Maine, in 1885. In 1908, he moved to Colorado where he set linotype for publications like the Rocky Mountain News and the Boulder Evening Herald, according to the CU library archives. He began his editorial work at Fort Collins Morning Express and later received an honorary bachelor of science degree from Colorado Agricultural College, now Colorado State University.

In 1921, Crosman joined the university as an assistant professor of journalism, alumni secretary, and director of publications and publicity. In 1922, he became head of journalism.

Crosman grew into a state and national leader, serving as president of both Kappa Tau Alpha, the field’s principal honorary society, and the Association for Education in Journalism and Mass Communication.

He specialized in law of the press, newspaper ethics and the history of journalism. He wanted students to be trained as critical thinkers and to use journalism history to set an aspirational stage for young journalists.

“Remembering that newspaper men of the past have suffered imprisonment, mutilation, hanging, drawing, and quartering for the sake of an idea, for the sake of freedom; that, in the face of the most terrifying laws they have defied authority and exposed corruption and iniquity in officials circles; knowing these facts, our students cannot help becoming better fighters, more vigorous, more fearless, more effectively the champions of the people,” Crosman wrote in his 1934 paper, “Responsibilities to Students and Press.”

Crosman was known as an energetic and thoughtful leader. He spoke regularly before major state, regional and national media education associations—frequently raising important questions about the role of the press in contemporary society and democracy.

“Knowledge of early history not only gives our students a clearer understanding of the real foundations of such principles as freedom of the press, but it is bound to inspire them, to give them courage, determination and a better conception of the true place of their profession in human affairs,” Crosman wrote.

Crosman continued his work at CU until the end, even announcing the winner of an award over the radio from his sickbed just days before he died on May 3, 1948, according to The Steamboat Pilot.

At the time of his passing, Crosman's contributions to the field were generously applauded by academics, professionals and fellow journalism leaders across the country.

“To the last his efforts were bent toward the improvement of the profession which has indeed lost a true friend,” the editors at The Colorado Transcript wrote in 1948.